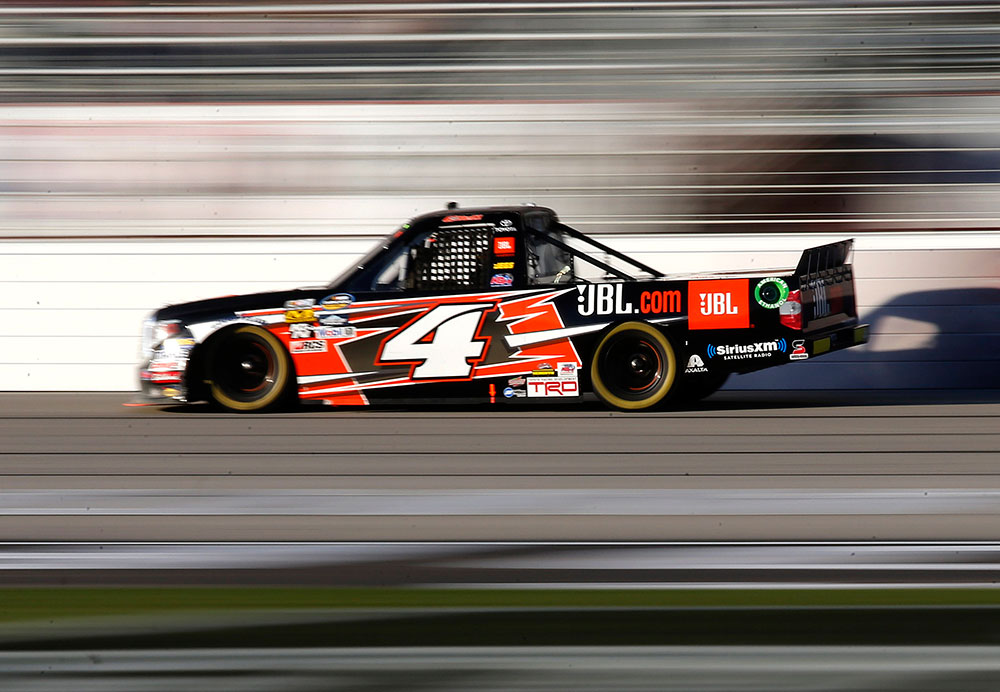 MOORESVILLE, N.C. (Aug. 23, 2016) – If you had to choose the JBL product that’s name signified the improvements that Christopher Bell has made between the first 10 and the last 10 races of his NASCAR Camping World Truck Series (NCWTS) career, it would have to be the ‘Xtreme’ – JBL’s ultimate splashproof portable speaker.

The open-wheel dirt standout began his Truck Series career on a high note, earning a fifth-place finish in his series debut at Iowa Speedway in Newton and then went to victory lane on the dirt at famed Eldora Speedway in Rossburg, Ohio in just his third-career start. While Bell continued to show speed across the final four events of his seven-race schedule last season, an eighth-place result at Texas Motor Speedway in Fort Worth was his only top-10 result post Eldora.

Bell’s talent behind the wheel was evident and earned him a full-time ride this year. Unfortunately, the results at the start of his rookie campaign were similar to those at the end of his debut season. In the first two events of the 2016 season, the talented youngster was in a position to win late in both races but was involved in accidents in the closing laps and finished 16th and 26th, respectively. In the third race of the season at Martinsville (Va.) Speedway, he was in a position for a top-10 finish but once again got caught up in an accident and ended the day with a 19th-place finish. With untimely luck and disappointing results, the Oklahoma native found himself 22nd in the point standings.

The Martinsville race marked the 10th start of his Truck Series career and at that point he had tallied one win, two top-five and three top-10 finishes. Despite proving that he could consistently run inside the top 10 and produce the speed necessary to be successful, his statistics showed an average finish of 14.4 and five results of 15th or worse.

Since leaving Martinsville, Bell has responded by finishing inside the top 10 in nine of the last 10 races, including six straight, and posted an average finish of 8.0 during that span.

With the improved results, the talented youngster has been able to charge all the way up to fifth in the NCWTS standings entering Saturday’s event at Michigan International Speedway in Brooklyn, and thanks to his win at Gateway Motorsports Park in Madison, Ill., in June, he currently sits fourth on the eight-driver grid for the inaugural Truck Series Chase.

With three races remaining until the Chase begins and six full-time drivers having notched at least one win, Bell can clinch his spot by winning at Michigan. If he isn’t able to win, Bell and the No. 4 JBL Racing team can still lock into the Chase if there isn’t another new winner this weekend amongst the full-time Truck Series competitors. Considering where they stood leaving Martinsville in April, you can say they’ve made ‘xtreme’ improvements.

This will be your first start at Michigan in any series. What do you know about the track going into this weekend?
“I know that it is a really big race track. From watching previous races it’s a place where aerodynamics really come into play and knowing how to manipulate the air to create momentum is going to be huge. Fortunately for me, I’ve learned a lot about the aerodynamics this year at the races we’ve had at the mile-and-a-half tracks and Pocono. Jerry (Baxter, crew chief) had a really fast truck with Kyle (Busch) last year and Erik (Jones) was also fast, so I’m confident that we’ll have a strong JBL Tundra again this weekend.”

As the Chase approaches, where do you feel like you and your team are at performance wise?
“Hopefully I’ve gotten all of my mistakes out of the way and we can keep improving as a team these last couple races to get tuned up for the Chase. I’m thrilled with how fast we’ve been the last few races — we’ve had really strong Tundras and I’m confident that will continue once the Chase starts next month.”

How does drafting in the trucks at Michigan compare to drafting at Daytona and Talladega?
“At the superspeedways, you see single and double-file drafting in a big pack and to be able to make a move you need the help of another truck. At Michigan, you are able to make a pass by yourself with the run you get off of the truck in front of you and sometimes you will see things get fanned out three and four wide.”

KBM-32: The No. 4 JBL team will unload KBM-32 for Saturday’s Careers for Veterans 200 at Michigan International Speedway in Brooklyn. Bell picked up a fourth-place finish with the Tundra in its debut at Kansas Speedway in Kansas City in May and followed it up with a 10th-place finish at Pocono Raceway in Long Pond, Pa., last month.

The Book on Baxter:
Veteran crew chief Jerry Baxter is in his fourth season atop the pit box for KBM. Since joining KBM, Baxter’s drivers have posted eight wins, three poles, 1319 laps led, 30 top-five and 48 top-10 finishes across 80 starts. The California native spent the 2015 season calling the shots for KBM’s No. 51 team, which collected two wins, 10 top-five and 14 top-10 finishes with drivers Daniel Suarez (12 starts), Matt Tifft (six starts), Kyle Busch (three starts), and Christopher Bell (one start) behind the wheel. In addition to his eight wins at KBM, he boasts one other Truck Series win (Cale Gale, 2012) and one NASCAR XFINITY Series win (David Reutimann, 2007).

Baxter’s drivers have combined to record one win, one top-five and one top-10 finish resulting in an average finish of 13.2 across four Truck Series starts in the Great Lakes State. KBM owner-driver Kyle Busch led 44 laps en route to victory in last year’s event with Baxter calling the shots.

JBL Snapchat Takeover:
Christopher Bell will be taking over the JBL Snapchat (@jblaudio) account this weekend at Michigan International Speedway. The 21-year-old driver will be bringing fans a glimpse of what it’s like to live like a driver with behind-the-scenes access to the No. 4 JBL Racing team both Friday and Saturday via his primary sponsor’s Snapchat account.