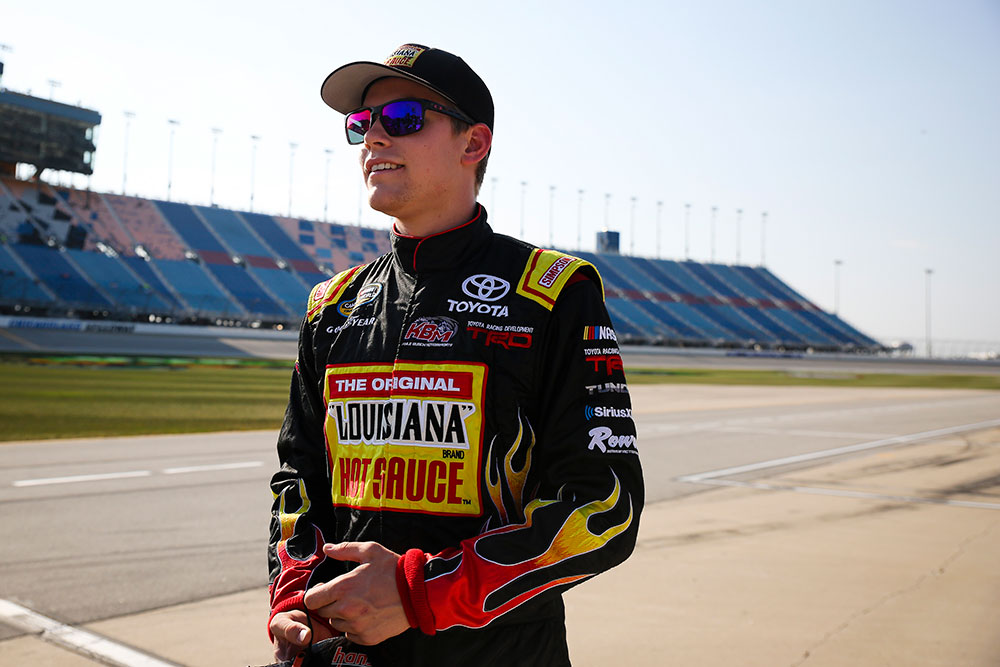 MOORESVILLE, N.C. (Sept. 26, 2017) –  In a city known for its bright lights, fast pace and never-ending entertainment, Myatt Snider and the No. 51 Louisiana Hot Sauce team are hoping to shine bright and go fast in “Sin City” for the Las Vegas 350 at Las Vegas (Nev.) Motor Speedway. After earning the second top-10 finish of his NASCAR Camping World Truck Series (NCWTS) career at Chicagoland Speedway in Joliet, Ill., in his last start, Snider is looking to keep the momentum going in his fifth race for Kyle Busch Motorsports (KBM) in 2017.

The 146-lap race will be Snider’s first trip to Las Vegas Motor Speedway, but he has gained experience on three other 1.5-mile tracks this season. Snider made his mile-and-a-half debut in his second NCWTS race of the season at Texas Motor Speedway in Fort Worth, where he was in place to grab a top 10 until a late-race spin relegated him to a 16th-place finish. At Kentucky Speedway in Sparta he started the race from the sixth position, led four laps and ultimately crossed the finish line 16th. In Snider’s latest NCWTS race, he took the green flag 10th and persevered from a mid-race spin to capture his second top 10 of the season at Chicagoland Speedway.

Between his two weeks off from the Truck Series, Snider didn’t stray away from the race track. On Sept. 23 he participated in the ValleyStar Credit Union 300 NASCAR Whelen All-American Series Late Model Stock Car race at Martinsville (Va.) Speedway. The prestigious event was the first race under the Speedway’s new LED lights. Snider took the green flag from the 21st position, but just past the halfway mark of the race couldn’t evade a wreck that happened in front of him. After bringing his car into the garage and thinking his race was over, his crew rallied and was able to get his car back on track having only lost two laps to the leaders. Snider eventually raced his way back onto the lead lap and finished the event 14th.

After Las Vegas, Snider can be seen behind the wheel of the No. 51 Tundra in three more races this season; at Talladega (Ala.) Superspeedway Oct. 14, Texas Motor Speedway Nov. 3 and Homestead-Miami (Fla.) Speedway Nov. 17.

When Snider takes the track Saturday evening, he will once again don the colors of Louisiana Hot Sauce on the hood of his No. 51 Toyota Tundra. Louisiana Hot Sauce is made in New Iberia, La. Over the years, the company has expanded, but they have stayed true to a promise made over years ago to create a perfectly balanced sauce that is “not too hot, not too mild.”

Snider is ready to make his mark in the NCWTS and is confident Las Vegas is the place he can do just that. The saying goes, “What happens in Vegas stays in Vegas,” but Snider hopes to capture the victory in Las Vegas and bring the winning trophy back home with him to North Carolina.

This will be your fourth start on a mile-and-a-half track in the NCWTS this year, what can you take from your earlier races and apply to this weekend at Las Vegas?

“Intermediate tracks are completely different from anything I’ve ever raced on, but I’ve been having fun figuring them out with some fast trucks from KBM. A lot of the learning process just involves figuring out where the best place to put your truck is. Chicago is a place where that all culminated and we were solidly inside the top 10 most of the night.”

Coming off your second top-10 finish of the season, how have you prepared yourself for this weekend’s race?

“Now that my truck races are starting to come along more often, I’ve been able to put in place a system of how I prepare for each race. Going to the competition meeting on Mondays, asking questions to Kyle (Busch), Bono (Kevin Manion, crew chief), and Nick (Hutchins, truck chief), to get a better idea of how the setup on the truck works, and how to race better.”

“Louisiana Hot Sauce has lots of benefits for me personally. When I like to give my food a little kick with hot sauce, no one does it better than LHS. Mainly because it adds spiciness, but not too much. I’ve found with other hot sauces that they make it so spicy that I can’t taste my food anymore. And that’s not what I’m about. It also tastes good too, it tastes like home since it’s vinegar based and I grew up on N.C.-style barbeque, which is also vinegar based. It’s the perfect combo really.”

The No. 51 Toyota Racing team scored a top-10 finish with Myatt (Snider) at the last mile-and-a-half track, Chicagoland Speedway, how do you feel going into Las Vegas?

“I feel great going into Las Vegas. Our team has worked really hard and I think we have a lot of momentum going into this weekend’s race. We are racing the same Tundra we ran at Chicagoland (Speedway) where we got a 10th-place finish and I am confident we can do it again this weekend. I have seen Myatt (Snider) grow this season and he is only getting better with every race. We have two practices Saturday morning to get our No. 51 Louisiana Hot Sauce Tundra dialed in and hopefully we’ll end up in Victory Lane that night.”

KBM-046: The No. 51 Louisiana Hot Sauce team will race KBM-046 for Saturday’s Las Vegas 350. Owner-driver Kyle Busch drove this Tundra earlier in the season at Michigan International Speedway in Brooklyn where he started 10th, led 47 laps and finished third. Snider also piloted this Tundra to a top-10 finish at Chicagoland Speedway.

In Manion’s lone Truck Series race at Las Vegas, Cody Coughlin qualified 11th and finished 17th in last year’s event. He has two XFINITY Series starts at the track with Martin Truex Jr., and while calling the shots in the Monster Energy NASCAR Cup Series, Manion earned one top-10 finish in 10 starts at Las Vegas.