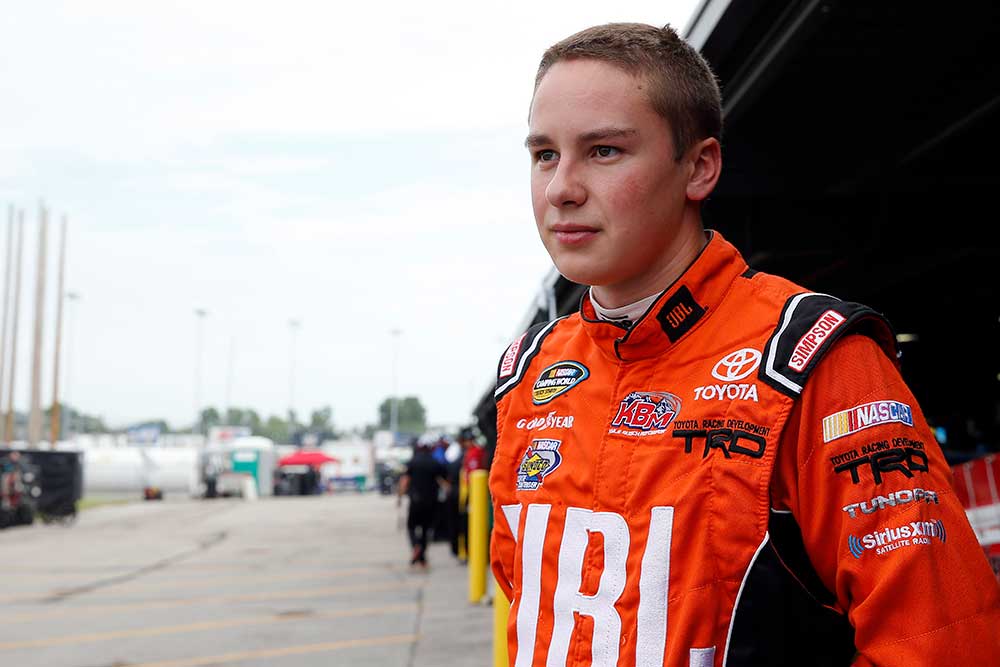 MOORESVILLE, N.C. (July 5, 2016) – Open-wheel dirt standout Christopher Bell found success early in his NASCAR Camping World Truck Series career, winning at Eldora Speedway in Rossburg, Ohio in just his third series start. While a win is a win in the record books, the talented youngster felt that because of his dirt-racing background everyone expected him to win that race and felt that he still needed to validate his driving skills by earning a win in the Truck Series on pavement.

The 21-year-old driver proved to the racing world that he is also capable of winning on pavement in the Truck Series’ last stop at Gateway Motorsports Park in Madison, Ill., on June 25. While a fisticuffs between two competitors late in the race made the headlines, it was Bell who delivered the knockout punch and went home with the trophy. After getting run up the hill on a restart while leading earlier in the race, the Oklahoma native made the gutsy call to restart from the inside lane for the race’s final restart on lap 158. He was able to clear fellow Sunoco Rookie of the Year contender Ben Rhodes through Turns 1 and 2 and remained out front for the final two laps to secure Kyle Busch Motorsports’ (KBM) its record-tying 50th Truck Series win.

Bell will now Buckle Up in his Tundra and head to Kentucky Speedway in Sparta, one of seven tracks he made a start at last season, for Thursday night’s 150-lap event on the freshly paved surface. Coming off a fifth-place finish in his series debut at Iowa Speedway, the rookie was looking to prepare for his first race on a mile-and-a-half track with two practice sessions and qualifying, but Mother Nature had a different plan.

With practice and qualifying washed out for last year’s event in the Bluegrass State, Bell lined up from the 16th position based on owner’s points. You would’ve never known he had never made a lap on a 1.5-mile track, as he moved up to the eighth spot by the time the competition caution flew on lap 25. He ran inside the top 10 for most of the event, but got loose on a restart with just under 20 laps remaining and ended up making contact with the wall. After repairs to fix the damage, the race was ended prematurely due to damage to the catchfence from another accident and the youngster was left with a 17th-place finish.

Coming into this year’s event at Kentucky, the colt now has eight starts under his belt on mile-and-a-half tracks and has been fast at each of the 1.5-mile tracks this season. His career-best finish on an intermediate track came earlier this season when he finished fourth at Kansas Speedway in Kansas City, but it was at Atlanta Motor Speedway in Hampton earlier this season where he had his best run. He led 42 laps that day, but blew a tire while leading with seven laps to go and was relegated to a 26th-place finish.

As one of five full-time Truck Series drivers to earn a victory this season, Bell has one foot in the door to earning one of the eight spots available for the first-ever Chase for the championship. With seven races remaining, it is possible that NASCAR’s third division could end up with more than eight winners and the final spots would be determined by a tiebreaker, so the No. 4 JBL racing team is ready to deliver a second victory and validate their ticket into the Chase.

What did it mean to get the 50th win for Kyle Busch Motorsports?
“I’m just so fortunate to be here driving for Kyle Busch Motorsports — the premier team in the Camping World Truck Series with an owner and mentor like Kyle Busch and everything that he and his wife Samantha put into this organization to make it successful. I learned a long, long time ago you’re only as good as the race car you sit in. I’m just so fortunate to be here and throughout the years, I’ve had such great car owners and along the way got connected with Toyota and Jack Irving, Tyler Gibbs, David Wilson, Ed Laukes, Paul Doleshal — all those guys at Toyota and the TRD family – and I’m just so lucky they believe in me. Like I said, I’ve used up my fair share of mulligans and they’ve been behind me 100 percent, so I wouldn’t be here without them and my crew chief, Jerry Baxter, he takes pretty good care of me too.”

Does having a win change your strategy for the remainder of the year?
“I don’t think it really has any effect on the rest of the year really — maybe aside from pit strategy or something where you can maybe gamble a little bit and try to get more wins. As far as on my side of things as a driver, you give 100 percent every time you’re on the race track.”

What did last week’s win mean to your team?
“Every win is special. You never know if you won your last one, so the cool part about it is I think we have about 50 employees for all of our teams and office people and the PR people and all the stuff that makes the clock tick and it’s pretty cool for all those people. I had about 60 text messages right after the race and most of them were from the people at the shop that don’t travel with us each week, but they are a huge part of why we are so successful — that kind of stuff means a lot. In terms of just the No. 4 team, last week’s win is going to be a relief — a big load off our shoulders now that we have a win towards making the Chase.”

How closely does everyone at KBM work together?
“All three of our full-time teams and the fourth team, which runs a handful of races, work closely together to make KBM better as a whole and we communicate between all the teams a lot both at the shop and when we are at the track. We have a lot of meetings at KBM (Kyle Busch Motorsports) and try to get better with our competition meetings and Kyle (Busch, team owner) sits in on everything and tries to help guide the kids, since we’ve got two full-time drivers in our organization that are young and have a lot of talent with Christopher (Bell) and William (Byron). We’re blessed to have all that and on our No. 4 team we’re really blessed to have JBL, Toyota, TRD and all the folks that support us.”

KBM-39: The No. 4 JBL Racing team will unload KBM-39, for Thursday’s Buckle Up in Your Truck 225 at Kentucky Speedway in Sparta. It is the same Tundra that Bell recorded an eighth-place finish with May 21 at Charlotte (N.C.) Motor Speedway.

The Book on Baxter:
Veteran crew chief Jerry Baxter is in his fourth season atop the pit box for KBM. Since joining KBM, Baxter’s drivers have posted eight wins, three poles, 1218 laps led, 27 top-five and 43 top-10 finishes across 74 starts. The California native spent the 2015 season calling the shots for KBM’s No. 51 team, which collected two wins, 10 top-five and 14 top-10 finishes with drivers Daniel Suarez (12 starts), Matt Tifft (six starts), Kyle Busch (three starts), and Christopher Bell (one start) behind the wheel. In addition to his eight wins at KBM, he boasts one other Truck Series win (Cale Gale, 2012) and one NASCAR XFINITY Series win (David Reutimann, 2007).

Baxter’s Truck Series drivers have produced two top-five and two top-10 finishes resulting in an average finish of 15.6 across five starts in the Bluegrass State.