Valiant Effort from Harrison Burton Comes Up Short at Michigan 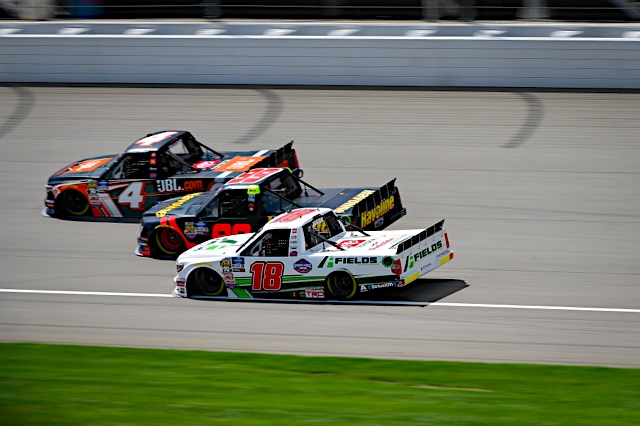 Harrison Burton put himself in position to win Saturday’s Corrigan Oil 200 at Michigan International Speedway and earn a spot in the NASCAR Gander Truck Series Playoffs, but after pushing eventual winner Austin Hill to the lead at the start of NASCAR overtime got shuffled back over the final two laps and finished 11th.

“It’s kind like our season; it was up and down. We ran really bad at the beginning; we weren’t very fast. Towards the end, we made good adjustments on the truck and we got better. Led a couple laps, and then we lost the lead. The 16 (Austin Hill) got a good run from behind me and took the lead. He was really fast and hard to catch.”

Burton finished sixth in the regular season driver point standings, but without a victory ended up 10th on the playoff grid.

Burton will be behind the wheel of the No. 18 Safelite AutoGlass Tundra when the NASCAR Gander Outdoors Truck Series resumes action Aug. 15 at Bristol Motor Speedway. Live coverage of the UNOH 200 begins Thursday at 8:30 p.m. ET on FS1.