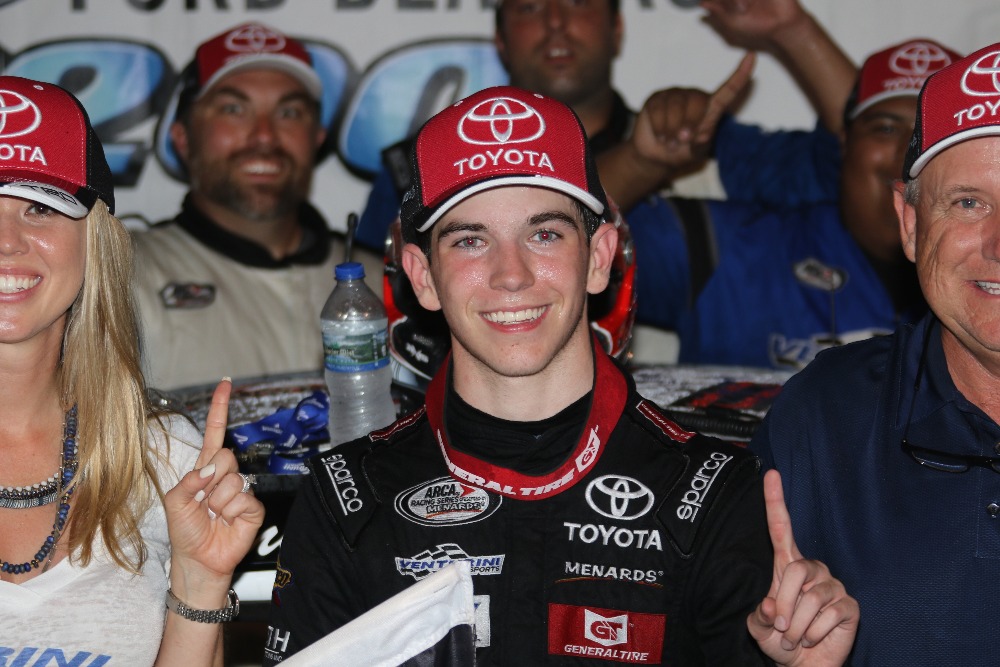 MOORESVILLE, N.C. (Feb. 21, 2019) – Kyle Busch Motorsports (KBM) announced today that Toyota Racing Development (TRD) driver Chandler Smith will compete in four NASCAR Gander Outdoors Truck Series (NGOTS) races for the organization in 2019 – splitting his schedule between the No. 51 and No. 46 Tundras – and will also compete in three marquee Super Late Model events in the No. 51 Camry.

The Georgia teenager will make his NGOTS debut June 15 in the No. 51 Tundra at Iowa Speedway in Newton, and will also compete for that team Aug. 15 at Bristol (Tenn.) Motor Speedway. Smith will compete for the No. 46 team June 28 at Gateway Motorsports Park in Madison, Ill., and Nov. 7 at ISM Raceway in Avondale, Ariz. On the Super Late Model side, he will race the Winchester 400 Oct. 13 at Winchester (Ind.) Speedway, the All-American 400 Nov. 3 at Fairgrounds Speedway in Nashville, Tenn., and the Snowball Derby Dec. 2 at 5 Flags Speedway in Pensacola, Fla.

Despite being just 15 years old at the time, Smith set an ARCA Racing Series record by winning four consecutive poles to start his career and earned his first victory after leading a race-high 102 laps at Madison (Wis.) International Speedway in his fourth series start. He was also victorious at Salem (Ind.) Speedway last September when he led all but one circuit of the 200-lap event. Smith totaled two wins, four poles, six top-five and nine top-10 finishes, while posting an average starting position of 3.3 and an average finish of 4.3 across his nine ARCA Racing starts last year. Despite competing in only nine of the 20 races, the racing prodigy led all drivers with 763 laps led.

In addition to his ARCA Racing Series experience, Smith has competed in some of the biggest Super Late Model events the last few seasons. He earned his first marquee win in January of 2018 in the CRA Speedfest at Crisp Motorsports Park in Cordele, Ga., edging out short-track legend Bubba Pollard. He also won the pole, led 97 laps and finished second to former KBM driver Noah Gragson in the 2018 Winchester 400 at Winchester (Ind.) Speedway and finished third in the 2017 running of the event. The talented teenager has also posted an average finish of 6.0 across three starts in the prestigious Snowball Derby at Five Flags Speedway in Pensacola. Fla.

“The opportunity to compete in one of NASCAR’s national series with Kyle Busch Motorsports is a dream come true and it wouldn’t be possible without everything that Toyota and TRD have done the last few years to help me develop as a driver, on and off the track,” said Smith. “I can’t wait to get the season started and I’m hopeful that I’ll be able to carry on the winning tradition that KBM has established in both the Truck Series and with their Super Late Model program.”

“Chandler was impressive in a limited ARCA Series schedule last year — winning poles, leading laps and bringing home a couple of victories,” owner Kyle Busch said. “He races with a veteran presence and has gone toe-to-toe with some of the best Super Late Model drivers in the country. He races hard and runs up front, and races the other competitors with respect and takes care of his equipment. We’re anxious to see him in one of our Tundras this season and feel he will gradually improve each time out. Even with such a limited schedule, it wouldn’t surprise me to see him get to victory lane similar to Erik Jones in his first season for us.

“At KBM, we love having representation at the marquee Super Late Model events and at one point we weren’t sure if that was going to happen this year, so we’re excited to be adding three of the biggest SLM races in the country to Chandler’s schedule. We feel that he gives us a great shot to add some more big wins to our resume, including the opportunity to bring home our third consecutive Snowball Derby victory.”

Sponsors for all of Smith’s races in both the NGOTS and the Super Late Model will be announced at a later date.