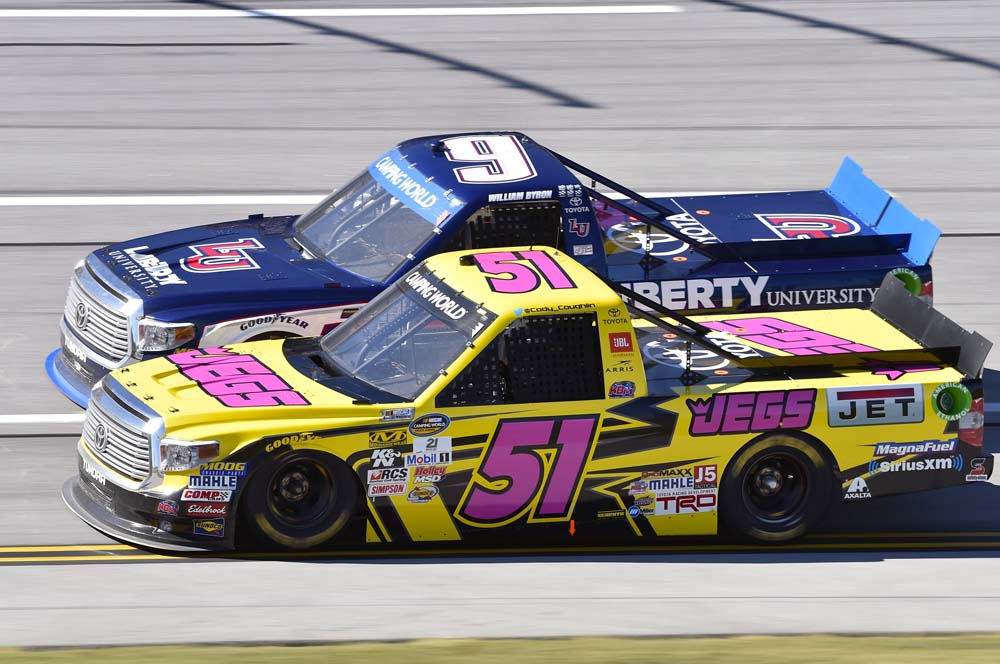 TALLADEGA, AL – Cody Coughlin proved he he can race with the best at Talladega Superspeedway. Coughlin qualified a career-best seventh for the NASCAR Camping World Truck Series Fred’s 250. The Joe Gibbs Racing Development driver showed throughout the early stages of Saturday’s race and was putting himself in a spot with a chance to win.

The 20-year-old duel Champion Racing Association champion ran in the top five for much of Saturday’s race before a freak incident brought his race to an early end.

Coughlin’s pink JEGS.com Kyle Busch Motorsports Toyota Tundra broke a driveshaft, which in turn severed the fuel line. Coughlin made the right decision to quickly jump out of line and come to a stop, rather than leaking fuel all over the race track.

“It’s a real shame, because my truck was so fast,” Coughlin said. “I was getting used to running in the draft and I felt like I was doing the right thing just riding in line. We were in the top five and the fuel pressure gauge went to zero.”

Coughlin was the leading Kyle Busch Motorsports truck at the time.

Saturday’s Fred’s 250 was the last of Coughlin’s nine truck starts for the 2016 season.

“My Kyle Busch Motorsports guys did an awesome job for me all year,” Coughlin said. “I wish we could have gotten the finishes that they all deserved. It was a lot of fun working with Bono (Kevin Manion, crew chief) and all of the guys this season.

“I’m very thankful for Kyle and Samantha Busch giving me the chance to run their trucks this season. It was a real honor to be in their equipment. I’m also very thankful for my parents, (Di and John) and my sister Kennedi for their love and support. I have the best family anybody could ask for. They always do their best to help me get to where I want to be in life. God has truly blessed me.”