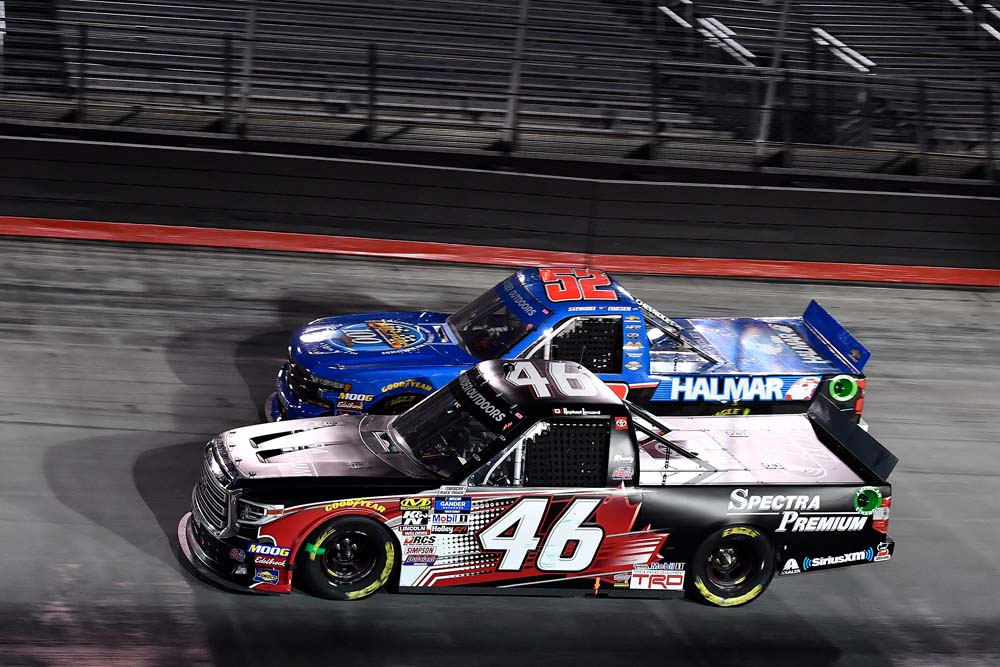 Making his third and final NASCAR Gander Outdoors Truck Series start of the season for Kyle Busch Motorsports (KBM), Raphael Lessard had the No. 46 Spectra Premium/FRL Express Tundra in position for a top-five finish late in the UNOH 200 at Bristol (Tenn.) Motor Speedway, but contact from the No. 45 truck sent him spinning with 25 laps remaining. After getting his Toyota going in the right direction, Lessard was forced to hit pit road for a set of scuffed tires under caution. The talented Canadian teenager restarted 19th with 22 laps remaining, but was able to maneuver his way forward in the closing laps and ended the night with a 12th-place finish.

Raphael Lessard, driver of the No. 46 Spectra Premium/FRL Express Tundra for KBM:

“It didn’t go how we wanted in qualifying. We qualified 16th and just got really loose. At the beginning of the race, we got stuck on the outside. The outside was very bad, so we fell back and then at one point the truck was — at first the truck was too loose again, but it just kept getting better and better each and every lap because the glue would just kind of get some — it would get tighter on me. Everyone was getting tight. I was still wrapping the bottom really, really good and going into the center. Strategy was good. We pitted at the right time. We went all the way up to fourth and I think if it wasn’t for this incident, we could’ve run in the top three easy. It is what it is and we’ll move on. I think that I showed that I can race against those guys and be competitive and just thanks to everyone at Kyle Busch Motorsports, Spectra Premium, Toyota and Marcus Richmond for this great truck.”

Chandler Smith will be behind the wheel of the No. 46 iBUYPOWER Tundra at ISM Raceway in Avondale, Ariz. Nov. 8. Live coverage of the Lucas Oil 150 begins Friday at 8:30 p.m. ET on FS1.