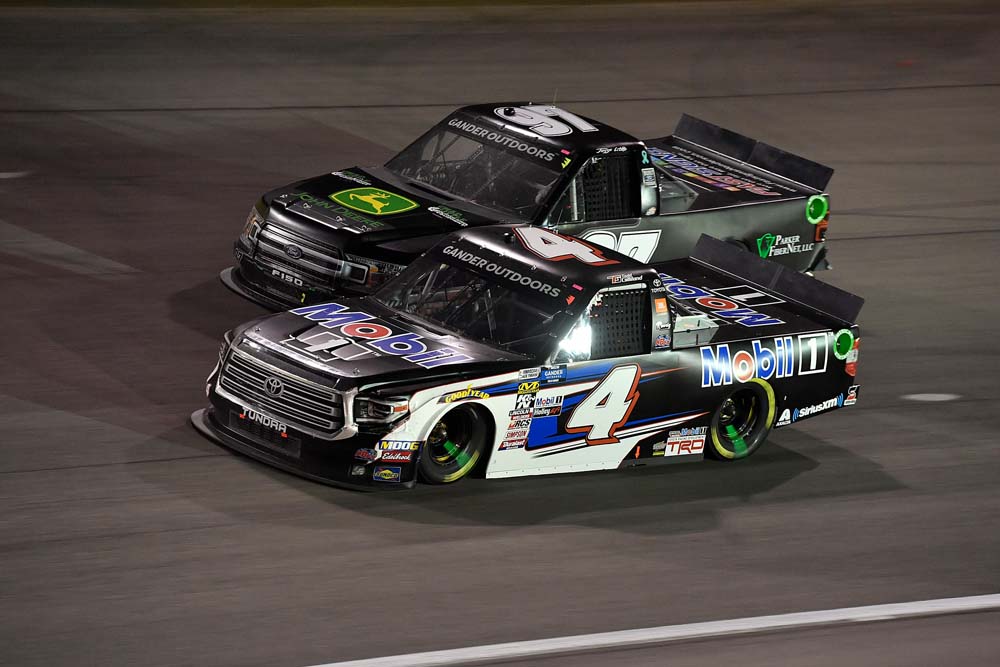 Todd Gilliland overcame damage to the No. 4 Mobil 1 Tundra to score another top-10 finish in the Strat 200 at Las Vegas Motor Speedway. Gilliland qualified his machine in the 13th position, but quickly moved into the top 10, where he stayed for the remainder of the race, before bringing it home in the 7th position.

TODD GILLILAND, driver of the No. 4 Mobil 1 Tundra for Kyle Busch Motorsports:

“Overall, it was not one of our worst nights or best nights. We got points in both stages. I ended up seventh, so it’s just about being smart in these races. That’s what we did tonight. Our truck was good. It could have been a little bit better. I punched a little bit of a hole in the front headlight in the start of the race. That didn’t help us at all. It kept getting worse and worse. It was soft and the air was pushing it in. Definitely my bad there, I think we could have ran better without that. Not one of our worse weekends for sure. I had a lot more fun here in Las Vegas than Atlanta.”

Harrison Burton, driver of the No. 18 Toyota, finished 5th

The No. 4 team completes the second race of the season with Gilliland ranked 9th in the Truck Series Driver Championship Standings, 21 points behind the leader.

Todd Gilliland and the No. 4 team will be back on track Saturday, March 23 at Martinsville Speedway in Martinsville, Va. Live coverage of the NGOTS 250 begins at 2:00 p.m. EST on FOX. –