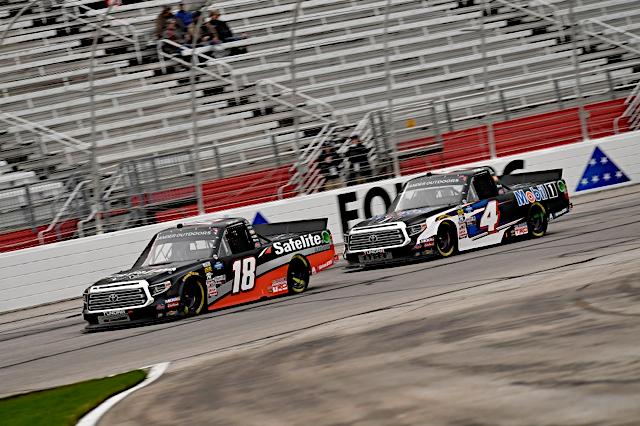 Todd Gilliland persevered through a wet and cold evening at Atlanta Motor Speedway to earn his first top-10 finish at the 1.5-mile oval. With qualifying washed out, Gilliland started in the 11th position. Trouble with the handling and slow restarts had Gilliland riding near the top-15 for most of the evening, but on the final restart Gilliland was able to make his way to the ninth position and hold it for his first top-10 of 2019.

TODD GILLILAND, driver of the No. 4 Mobil 1 Tundra for Kyle Busch Motorsports:

What did you think about racing with your team owner, Kyle Busch, today?

“He flies by me, all of us, so fast I didn’t even see him. It’s frustrating because we’re all in the same truck, but he makes it look so easy. I don’t know. We’ll get there eventually I guess. I guess he’s pretty decent at this stuff. If nothing else, we can just learn from him and watch the race over and see what he did. Obviously there’s a big difference from where I was to where he was. Like I said, just try and get the gap smaller and smaller and hopefully be there one day.”

We just were horrible on restarts the whole time. I don’t know. We could never get going like our first five laps after a restart. We’d fall back to probably 20th every time. We were really fast after that, obviously, but we were way too far behind at that point. Just something – I don’t know I was so loose to start like five laps and then after that I’d be really good. I don’t know what we got going on. It’s just something to work on still. Our middle to end of the run speed was good, but in these truck races, restarts are so important so it doesn’t really count as much. That’s what it’s all about is putting a whole segment together and we didn’t quite do that tonight, but we’ll get there.”

Harrison Burton, driver of the No. 18 Toyota, finished 8th

The No. 4 team completes the second race of the season with Gilliland ranked 11th in the Truck Series Driver Championship Standings, 37 points behind the leader.

Todd Gilliland and the No. 4 team will be back on track Friday, March 1 at Las Vegas Motor Speedway in Las Vegas, Nev. Live coverage of the Strat 200 begins at 9:00 p.m. EST on FS1.