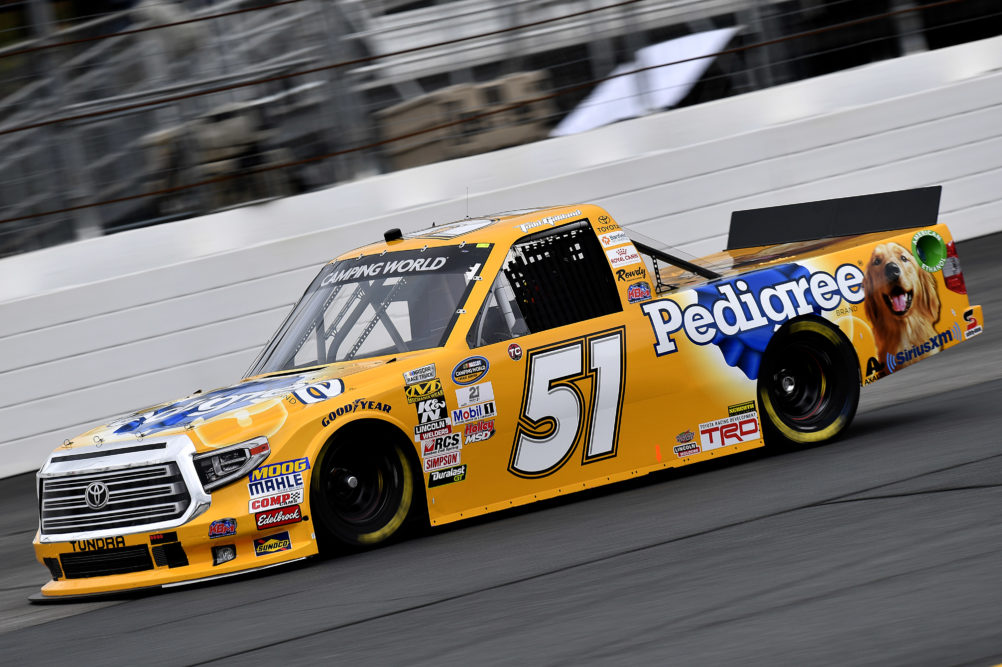 ● Driving the No. 46 PEDIGREE® Toyota Tundra for KBM, Gilliland made his Truck Series debut earlier this season at Dover (Del.) International Speedway, where he scored a 20th-place finish after the right-front wheel broke on his Tundra 116 laps into the 200-lap event. Prior to the incident, Gilliland competed among the top-10 and raced as high as second place.

● Gilliland finished fifth in his most recent Truck Series race Oct. 28 at Martinsville (Va.) Speedway. He picked up the top-five result after starting from 13th place. It was Gilliland’s second straight top-five finish in the Truck Series. Driving the No. 51 PEDIGREE® Toyota for KBM Sept. 23 at New Hampshire Motor Speedway in Loudon, Gilliland qualified fifth and finished third in what was only his fourth career start in the Truck Series.

Congratulations on winning the 2017 NASCAR K&N West Championship. How special is it to make it back-to-back titles in that series?

“I am so grateful to have won the West Series championship for the second time in a row. So much hard work goes into winning a race, let alone a championship. My team and I never gave up – we went out there every race and gave it our all and it paid off. This championship is very special to me and it’s one that I will never forget.”

You finished fifth in your most recent truck series race at Martinsville and finished third the race before that at New Hampshire. That’s quite a run. How much does momentum help you across multiple racing series?

“I think, any time you can race well across multiple series, it gives you a confidence boost. I also think it shows people what my full racing ability is and that I work hard to do the absolute best I can no matter what series I’m running in. I’m really proud of how we’ve run in the past two Truck Series races and I’m excited to give it one more shot this weekend at Phoenix to close out my season.”

This weekend’s race at Phoenix concludes your 2017 Truck Series campaign. What have you learned and how will that help you moving forward?

“Every time I get in the truck for KBM, I learn something new. This season has taught me so much that will help me in the future for my Truck Series career and my entire racing career. I’m fortunate enough to have the best in the business at KBM. They have taught me so much, from communicating during a race to understanding the truck better. I hope that I can take everything I’ve learned so far this season with me to Phoenix and get my No. 51 Pedigree Tundra to victory lane Friday night.”

Hillman Jr., has one win, five top-five and six top-10 finishes in 10 starts as a crew chief in the NCWTS at Phoenix. His win came in 2005 with Todd Bodine.