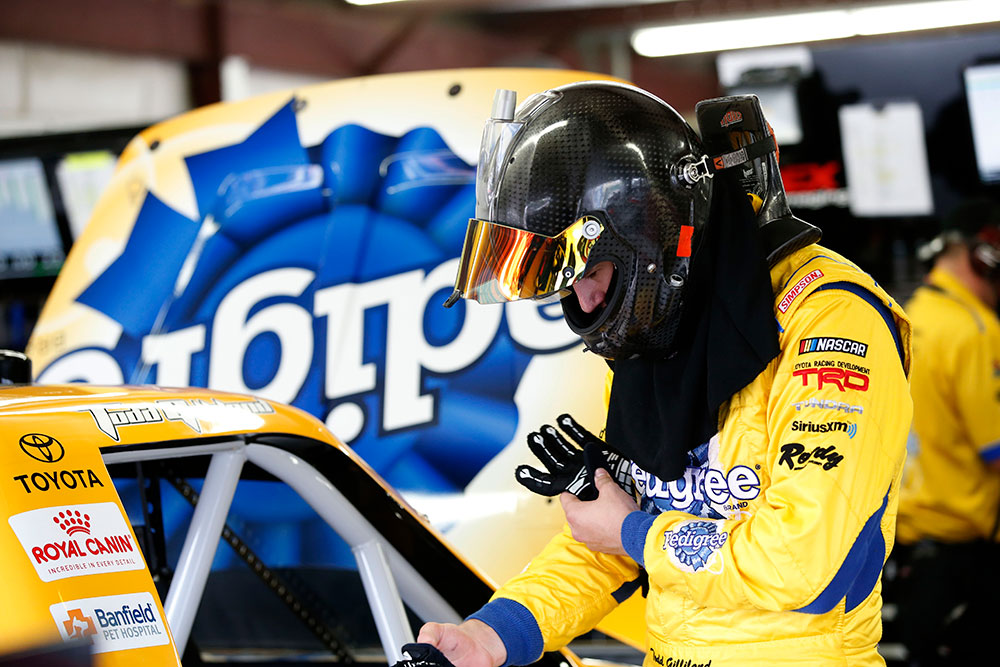 ● Todd Gilliland, driver of the No. 46 PEDIGREE® Toyota Tundra for Kyle Busch Motorsports (KBM), will make his fifth career start in NASCAR Camping World Truck Series competition Saturday in the Texas Roadhouse 200 at Martinsville (Va.) Speedway. At 17 years of age, Gilliland is a third-generation driver and is the reigning NASCAR K&N Pro Series West champion. With only one race remaining in the 2017 K&N Pro West series season, Gilliland leads the championship standings by 11 points. The season finale is Nov. 4 at Kern County Raceway Park in Bakersfield, California, where Gilliland is a two-time winner.

●  Driving the No. 46 PEDIGREE® Toyota Tundra for KBM, Gilliland made his Truck Series debut earlier this season at Dover (Del.) International Speedway, where he scored a 20th-place finish after the right-front wheel broke on his Tundra 116 laps into the 200-lap event. Prior to the incident, Gilliland competed among the top-10 and raced as high as second place.

●  Gilliland picked up his first career top-five finish in Truck Series competition during his most recent event Sept. 23 at New Hampshire Motor Speedway in Loudon. Driving the No. 51 PEDIGREE® Toyota for KBM, Gilliland qualified fifth and finished third in what was only his fourth career start in the Truck Series.

It’s been a few weeks, but you finished third in your last outing in the Truck Series. How much of a confidence boost does that provide for this weekend’s race at Martinsville?

“Finishing third was definitely a big achievement for me. Earning my first top-five in the Truck Series is amazing. But, we are going to go out to Martinsville and try and make the most out of the opportunity, try to get another top-five finish and hopefully run up front all day.”

Like at New Hampshire, you are going into a race with previous experience at the track. Talk about that.

“I’ve run two Late Model races at Martinsville, so I have a few laps down on the track. But it will be totally different in the NASCAR Camping World Truck Series. I’m looking forward to getting on the track in a new series.”

Because you have some experience at Martinsville, can you explain what it’s like racing on a short, flat track like this one?

“I like the track a lot. I was out there during the spring watching the race to help prepare for this weekend. You definitely have to be aggressive and use the bump-and-run a little bit and I’m prepared for that. We will just have to see what it comes down to at the end.”

Knowing how challenging it is to make up ground at Martinsville, how much emphasis will you place on qualifying this weekend?

“Qualifying will be important. I think you’re still going to have to try and move up with every restart and be very aware of the trucks around you in the race. We can also be pretty aggressive with pit strategy, so I’m excited to see what we can go out there and do. I know my team at Kyle Busch Motorsports will bring me a fast Pedigree Tundra, so then it’s up to me to take advantage of that and hopefully get my first win this weekend.”