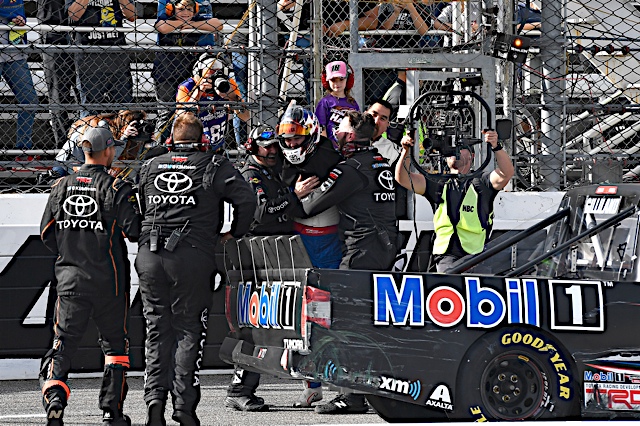 It was finally time for Todd Gilliland and the No. 4 Mobil 1 team to claim the victory in the NASCAR Gander Outdoors Truck Series. The talented teenager claimed the clock after a hard-fought battle at Martinsville Speedway. On Friday, Gilliland was fifth-fastest and top of the board in two practice sessions. In one round of single-truck qualifying on Saturday morning, Gilliland earned the 11th starting spot, while teammate Christian Eckes earned the pole.

Gilliland began his 46th Gander Trucks start in 11th, but soon fell back. The young driver persevered through a tight handling condition and damage suffered in an on-track incident to earn his first career win in the NASCAR Gander Outdoors Truck Series.

How does it feel to finally get a win?

“It feels amazing. This place is really hard to win at. This Mobil 1 Toyota Tundra is not as pretty as we hoped it would be when we crossed the start-finish line, but man, it looks even better with water and Gatorade on it. Can’t thank JBL, Toyota, all the fans enough. Thank you guys for sitting around. I think that was a good finish. I don’t really know. Luckily we were out front.”

How much do you relish a moment like this knowing how hard it is to get a win?

“It means way more than it used to. Winning used to be a weekly deal. It just really makes me appreciate it more and more every single week that goes by that you don’t win. You know how hard you’re trying as well as everyone else. My whole team puts their blood, sweat and tears into this thing just as much as I do. That’s what frustrates you. You don’t really know what that next step is to get better. Once you put a whole race together, you kind of realize what goes on and attrition a little bit. Just pure speed is the other part of it. We were able to have a little bit of both.”

Harrison Burton, driver of the No. 18 Toyota Tundra, finished 18th

Christian Eckes, driver of the No. 51 Toyota Tundra, finished 17th

Gilliland rises to the 11th spot in the NASCAR Gander Outdoors Truck Series driver points standings after 21 races in the 2019 season.

Todd Gilliland and the No. 4 JBL team will return on Friday, Nov. 8 at ISM Raceway for the Lucas Oil 150. Live coverage of the event begins at 8 p.m. EST on FS1.