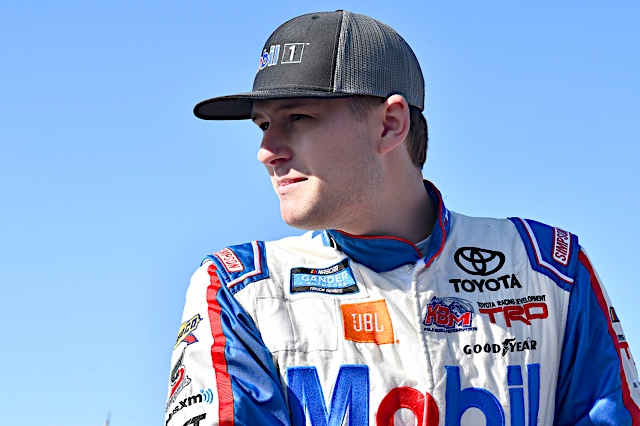 You won the ARCA Menards Series race in the spring and last year you were second before you wrecked, are you looking forward to Talladega?
“Yeah, definitely. That was my last win, was in the springtime there at Talladega. It’s been a good track for us, last year in the truck was my first superspeedway race ever and I was running second when I wrecked with like 10 laps to go. Superspeedway racing is a lot of fun to me still at this point. I’ve still got a lot to learn. I’m really excited to be working with my spotter, Kevin Hamlin, there, I feel like he’s going to help me out a lot. Just really looking forward to it all around. We’ve got a really fast Mobil 1 Tundra also.”

What’s the difference between Daytona and Talladega?
“In my opinion, I think Talladega is just a lot more fun than Daytona. There’s tons of room at Talladega, where Daytona, running three-wide is kind of uncomfortable and you’re just right on top of each other, but at Talladega you can run three, almost four wide and just be really easy. I think it makes it a lot easier to pass and you get a lot more momentum just going around the race track. For those reasons, I think it’s going to put on a better race and be a lot more fun for the drivers.”

KBM-040: The No. 4 Mobil 1 team has prepared chassis KBM-040 for this weekend’s Sugarlands Shine 250. This chassis has been piloted most recently by Gilliland at Daytona (Fla.) International Speedway earlier this year, and at Talladega last season. The best finish it has attained was a sixth-place at Talladega in 2016 with Christopher Bell at the wheel.