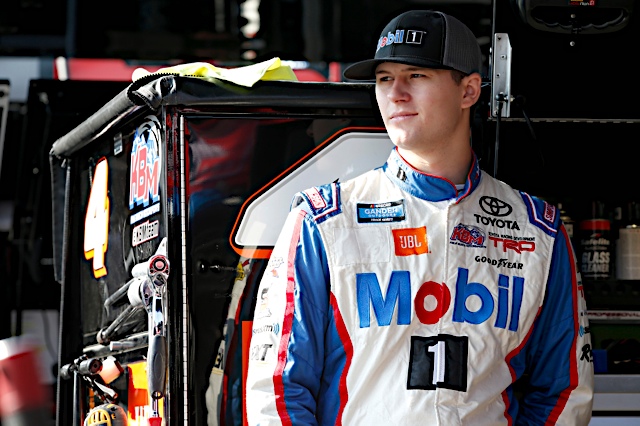 How does last year’s experience at Bristol help you this year?
“Last year we were ok in practice I thought, but then we qualified bad. We started the race really bad, I spun out actually, and then we were able to come from the back. I ran the top a lot. We never got the chance to pit so I was on really old tires and we ended up finishing fifth, I think. A good finish, we need to run up there all day and then hopefully make a little charge at the end like we did last time. The KBM guys tested up there, I didn’t get a chance to, but hopefully they got the setup tuned in for us this weekend and all four of us can contend for a win.”

How does your K&N experience help you?
“I ran there in K&N three times and my last time there I was able to get a win. That was a lot of fun. Bristol is a lot of fun when you have a good car and if not it’s kind of hard to race because once you get side by side there’s not a lot of racing room as everyone can see. Hopefully I’ve got a good Tundra this weekend and we can put Mobil 1 in victory land and just have an overall smooth weekend.”

KBM-045: The No. 4 Mobil 1 team has prepared chassis KBM-045 for this weekend’s UNOH 200. Gilliland last piloted this chassis earlier this season at Iowa Speedway and has earned two top-five and five top-10 finishes in his seven starts in this machine. Owner-driver Kyle Busch earned a victory in this chassis at Charlotte in 2017.