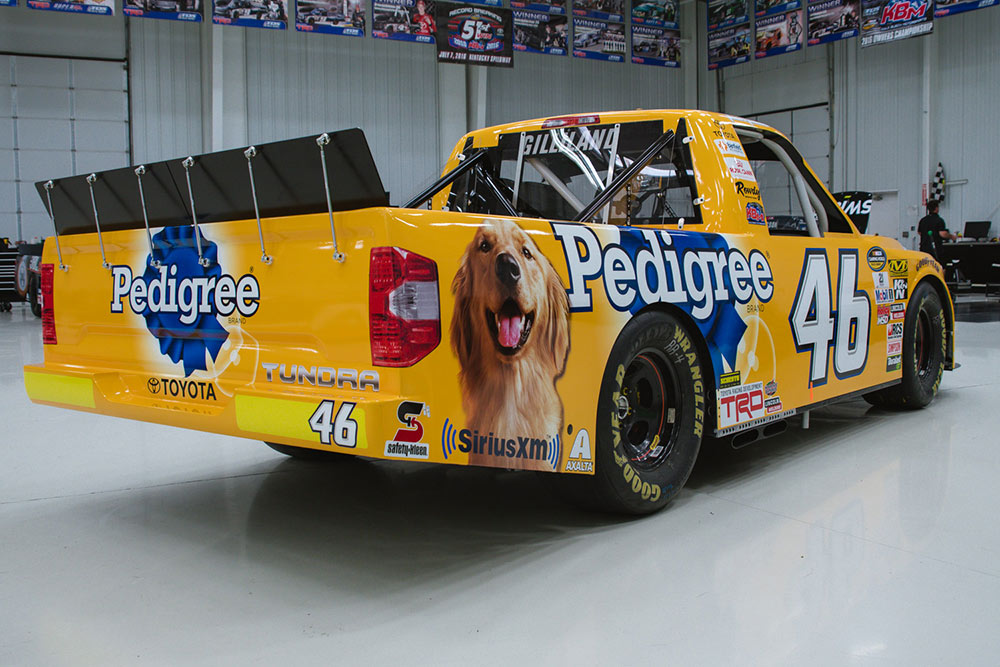 ●  Todd Gilliland, driver of the No. 46 PEDIGREE® Toyota Tundra for Kyle Busch Motorsports (KBM), will make his NASCAR Camping World Truck Series debut this Friday in the Bar Harbor 200 presented by Sea Watch International at Dover (Del.) International Speedway. At 17 years of age, Gilliland is a third-generation driver and is the reigning NASCAR K&N Pro Series West champion.

● Friday’s Truck Series race is the first of six in which Gilliland will compete in 2017 for KBM. Gilliland is scheduled to race the No. 46 PEDIGREE® Tundra Oct. 28 at Martinsville (Va.) Speedway. PEDIGREE® will also sponsor Gilliland’s schedule of races in the No. 51 Tundra including events June 17 at Gateway Motorsports Park in Madison, Illinois, Sept. 3 at Canadian Tire Motorsports Park in Bowmanville, Ontario, Sept. 23 at New Hampshire Motor Speedway in Loudon, and Nov. 10 at Phoenix International Raceway.

● It will be a “double dog” weekend for PEDIGREE® as the brand’s colors will also adorn car owner Busch’s No. 18 Joe Gibbs Racing Toyota Camry for Sunday’s AAA 400 Drive for Autism Monster Energy NASCAR Cup Series race at Dover.

How does it feel to be making your first start in the NASCAR Camping World Truck Series?

“I am very excited to get behind the wheel and start my first NASCAR Camping World Series truck race at Dover. Anytime you can go to the racetrack with Kyle Busch Motorsports, you know you’re going to have a competitive truck. It gives me a lot of confidence going into the race and I can’t wait to get the weekend started.”

What does it mean to have a brand like PEDIGREE® along for the ride?

“I’m proud to have a sponsor as well-known as PEDIGREE® join us at Kyle Busch Motorsports this season. There’s a family connection with PEDIGREE®, as they were the sponsor on my dad’s (David Gilliland) car in 2006. It’s a great feeling to know they have confidence in me and this race team. I’m looking forward to the opportunity to get behind the wheel, earn solid finishes and hopefully get PEDIGREE® to victory lane this season.”