Todd Gilliland and the No. 4 Mobil 1 Team Have Strong Run Soured at Canada 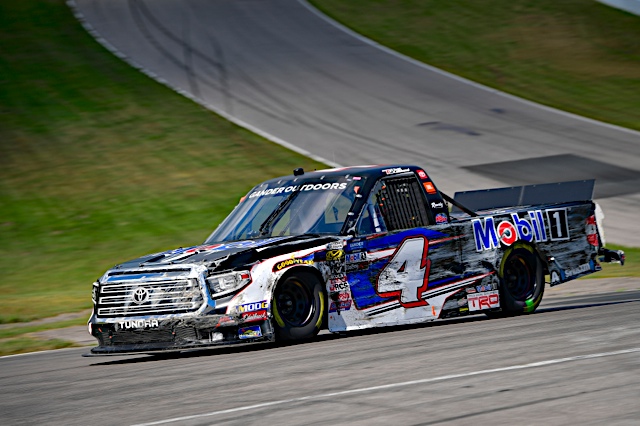 Todd Gilliland and the No. 4 Mobil 1 team had a disappointing end to a strong run at Canadian Tire Motorsports Park with a 18th-place finish. In two NASCAR Gander Outdoors Truck Series practice sessions on Saturday morning, Gilliland posted the fastest lap in the first practice and was fifth-fastest in final practice. In two rounds of group qualifying on Sunday afternoon, Gilliland earned the second starting spot for the 64-lap race.

Early in the first stage, Gilliland pressured Brett Moffitt for the lead, but a lack of rear grip and a spin on lap 13 sent him back in field. Crew chief Wes Ward and the No. 4 team were able to make repairs and the young driver rose through the field into the top 10 in the final stage before a problem with the motor resulted in a late race pit stop and an 18th-place finish.

“We had a smooth weekend going. We qualified second and thought we had really good speed in the first run. Just our long run speed wasn’t there all weekend. In practice we kind of saw it and then in the race I just got really loose as we went and was not really able to keep up with Brett Moffitt there on the long run. I still thought we had good speed, and then I got in the corner a little too hard and locked up the rear tires and got in the wall and got some damage. That didn’t help us. Then about halfway through the race we had some more problems with fuel pressure and basically the motor just not running right when I’d get on the gas. That killed our speed too. We had to pit under green on the last run and just were never in contention after that.”

Harrison Burton, driver of the No. 18 Toyota Tundra, finished 21st

Alex Tagliani, driver of the No. 51 Toyota Tundra, finished second

Gilliland fell to the 12th spot in the NASCAR Gander Outdoors Truck Series driver points standings after 18 races in the 2019 season.

Todd Gilliland and the No. 4 JBL team will return on Friday, Sept. 18 at Las Vegas (Nev.) Motor Speedway. Live coverage of the event begins at 9 p.m. EST on FS1.