Todd Gilliland and the No. 4 Mobil 1 Team Earn Top-10 in Rowdy Night at Bristol Motor Speedway 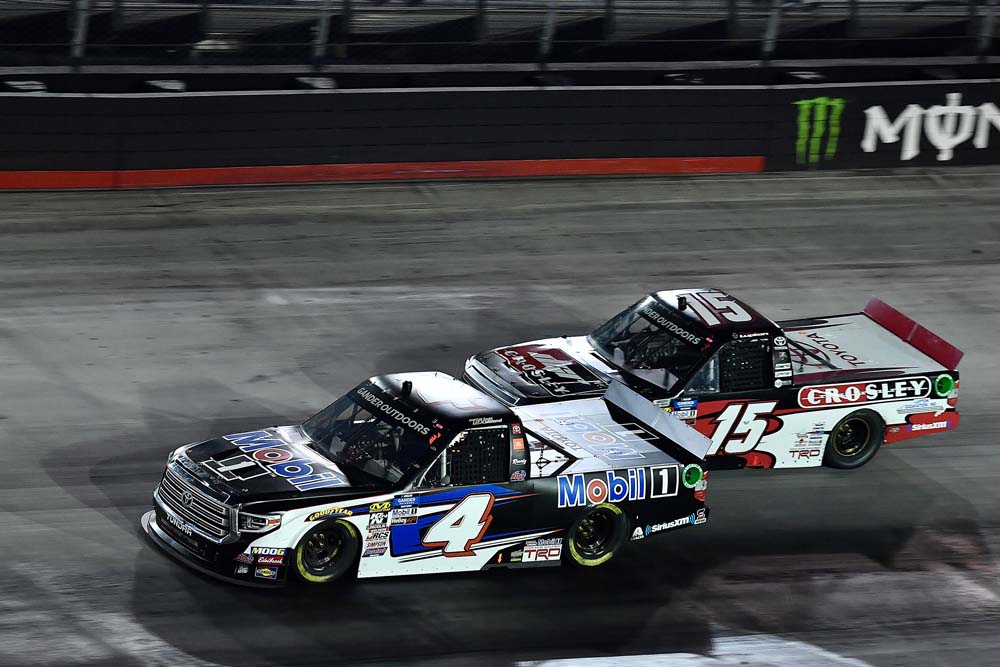 Todd Gilliland and the No. 4 Mobil 1 team survived a caution-filled UNOH 200 at Bristol Motor Speedway relatively unscathed to earn his 10th top-10 finish of the season. In two NASCAR Gander Outdoors Truck Series practice sessions on Thursday morning, Gilliland posted the 13th-fastest lap in the first practice and was 18th-fastest in final practice. In one round of single-truck qualifying on Thursday afternoon, Gilliland earned the 17th starting spot on a slick track under sunny skies.

Under the lights at Thunder Valley, Gilliland struggled throughout the first stage, but crew chief Wes Ward and the No. 4 team made significant adjustments to work on the handling of the Mobil 1 Tundra and he was able to take advantage of the high rate of attrition and gain positions to finish in the top 10.

That looked eventful out there.

“Yeah. There’s nothing you could really do. I mean restarts were crazy. Everyone was just running into each other on the restarts. It worked out for me because I was like the last car on the lead lap a lot of the time. Whenever someone else would make a mistake, we could just kind of jump on them. Somehow ended up ninth. Not our best truck, not our best weekend by far. Still just – I guess being able to salvage something, but it still sucks to see these guys competing for wins week in and week out. We just aren’t there. I don’t know what it’s going to take, but we’ll just keep working. I definitely want to be up on top of that building. It is what it is. Ninth place and we’ll move on.”

Harrison Burton, driver of the No. 18 Toyota Tundra, finished 23rd

Chandler Smith, driver of the No. 51 Toyota Tundra, finished second

Raphael Lessard, driver of the No. 46 Toyota Tundra, finished 12th

Gilliland continues to hold the 11th spot in the NASCAR Gander Outdoors Truck Series driver points standings after 17 races in the 2019 season.

Todd Gilliland and the No. 4 Mobil 1 team will return on Sunday, Aug. 25 at Canadian Tire Motorsport Park. Live coverage of the event begins at 2:30 p.m. EST on FS1.