Todd Gilliland and the No. 4 JBL Team Earn Top-10 at Pocono 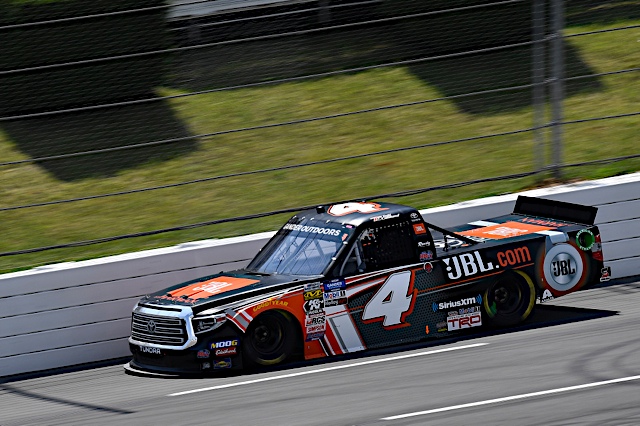 Todd Gilliland and the No. 4 JBL team earned a top-10 in the Gander RV 150 at Pocono Raceway in Long Pond, Pa. In two NASCAR Gander Outdoors Truck Series practice sessions on Friday, Gilliland posted the second-fastest lap in the first practice and was fastest in final practice. During single-vehicle qualifying on Friday afternoon, Gilliland posted the seventh-fastest lap. After the green flag flew on Saturday afternoon, Gilliland was able to make his way as high as third in the early stages of the race, but ultimately he would finish in seventh after battling the handling condition on his JBL Tundra.

Todd Gilliland, driver of the No. 4 JBL Tundra for Kyle Busch Motorsports:

“Not real good. Kind of frustrating day just being stuck, getting passed a lot. The first couple restarts worked out for us. We were able to get up to third pretty fast. Then just started that first run really loose on exit. I couldn’t touch the gas. Guys were getting such big runs on me in the straightaways. They are really long here, so it makes a big difference. My guys made a lot of good changes on that one pitstop. We just didn’t have enough time. When you start the race like that, just falling and the momentum is not with you, it’s hard to regain that in one pit stop. I think we still made up quite a bit of ground on how we were. We just have to keep digging.”

Christian Eckes, driver of the No. 51 Toyota Tundra, finished fourth

Gilliland and the No. 4 team rank seventh in the Gander Trucks Driver Championship Standings following the 14th race of the season, 154 points behind the leader.

Todd Gilliland and the No. 4 JBL/SiriusXM team will return on Thursday, August 1 at Eldora Speedway. Live coverage of the Eldora Dirt Derby begins at 9 p.m. EST on FS1.