Todd Gilliland and the No. 4 JBL/SiriusXM Tundra Earn Another Top-5 at Eldora Dirt Derby 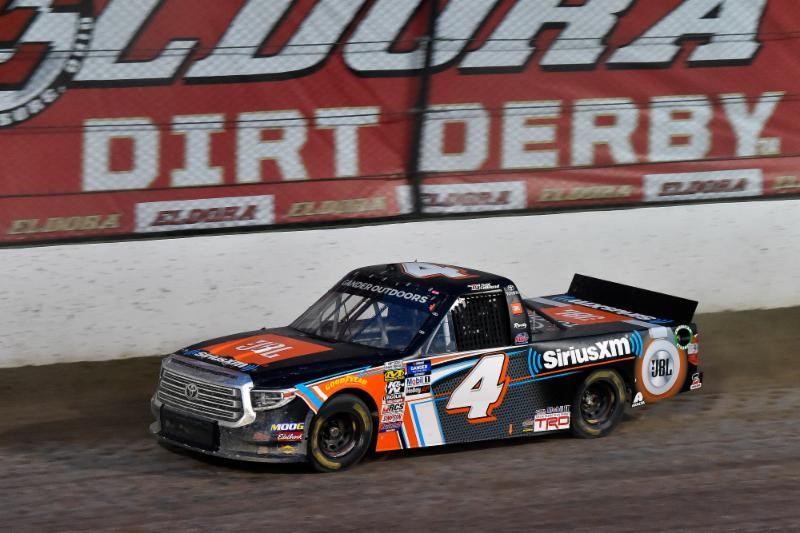 Todd Gilliland and the No. 4 JBL/SiriusXM team put down a strong run to earn a top-five finish at the Eldora Dirt Derby at Eldora Speedway in Rossburg, Ohio. In two NASCAR Gander Outdoors Truck Series practice sessions on Wednesday, Gilliland posted the eighth-fastest lap in the first practice and was fourth-fastest in final practice. In the third of five qualifying races on Thursday afternoon, Gilliland raced his way to second place, earning the eighth starting position for the feature event.

Under the lights on the half-mile clay oval, Gilliland had a strong run, staying in the top five for most of the race. The young driver avoided trouble amidst the myriad of caution flags, 12 for 68 laps, and brought his JBL/SiriusXM Tundra home in fifth, after challenging for the lead for much of the final stage.

Solid all day Todd; talk about your run here today.

“Definitely a solid day, but solid days don’t cut it at this point. We’ve put ourselves in a bad points position and we’ve got to deal with it. Today, I felt like we had a truck that could compete for the win; it was just about getting in the right lane. All the little details that I should have been a little better at. It’s all a learning curve. I’m really happy with the race we ran. I just wish we could have finished it off better because we ran better than fifth.”

Christian Eckes, driver of the No. 51 Toyota Tundra, finished sixth

Gilliland and the No. 4 team rank seventh in the Gander Trucks Driver Championship Standings following the 15th race of the season, 149 points behind the leader.

Todd Gilliland and the No. 4 JBL team will return on Saturday, August 10 at Michigan International Speedway. Live coverage of the Corrigan Oil 200 begins at 1 p.m. EST on FS1.