Todd Gilliland and the No. 4 JBL Fest Team Earn Top-Five at Las Vegas 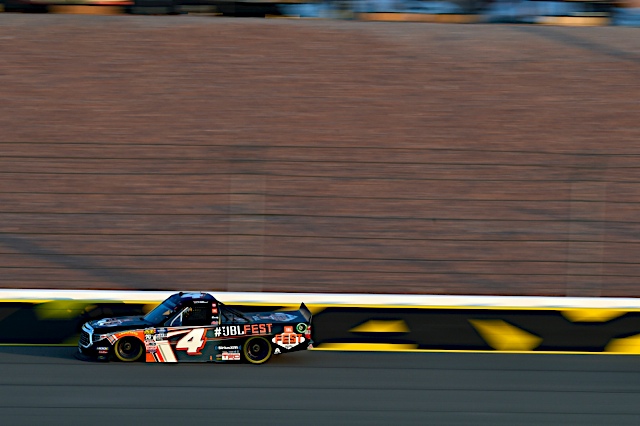 Todd Gilliland and the No. 4 JBL Fest team earned a top-five finish at Las Vegas Motor Speedway in the World of Westgate 200. Friday morning, in the single two-hour practice, Gilliland was 12th-fastest. In one round of single-truck qualifying on a slick track Friday afternoon, Gilliland earned the third starting spot for the 134-lap event.

Todd Gilliland, driver of the No. 4 JBL Fest Tundra for Kyle Busch Motorsports:

“It was an up-and-down night. We qualified third, which was better than I expected. Ran decent in the first stage, finished fifth. Just on every restart, we were on the splitter a little bit and it just plowed for 15 laps till the air pressure came up, and after that, it would just take off. It shouldn’t be like that, so something was definitely up. But that’s up to me to relay to the team. I didn’t do a very good job of that.”

Harrison Burton, driver of the No. 18 Toyota Tundra, finished ninth

Christian Eckes, driver of the No. 51 Toyota Tundra, finished third

Gilliland remains in the 12th spot in the NASCAR Gander Outdoors Truck Series driver points standings after 19 races in the 2019 season.

Todd Gilliland and the No. 4 Mobil 1 team will return on Saturday, Oct. 12 at Talladega Superspeedway. Live coverage of the event begins at 1:30 p.m. EST on FS1.