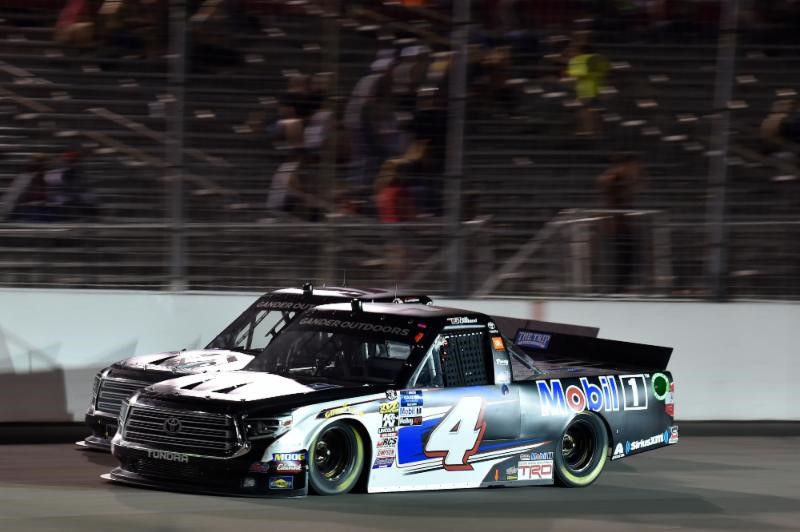 After a rainy start to NASCAR Gander Outdoors Truck Series race day at World Wide Technology Raceway at Gateway, Todd Gilliland and the No. 4 Mobil 1 team put together a solid race to earn Gilliland’s best finish of the season with a second-place finish in the CarShield 200. The young driver posted the second-fastest lap in one practice on Saturday afternoon, after both first practice and qualifying were washed out. The field was set by owners’ points standings as per the NASCAR Rule Book, so Gilliland rolled off from the 11th position.

The CarShield 200 began as scheduled despite inclement weather through the early afternoon. Gilliland began the race near the back of the top-10, but crew chief Michael Shelton made adjustments to the Mobil 1Toyota Tundra and the driver was able to work his way toward the front, eventually powering his way to the second position in the closing laps.

“In practice I thought this was going to be our night. Starting in the back didn’t help us there. We had to do some pit strategy. We executed a really good race, so that’s one thing I’m really proud of and I felt like I drove a good race. Overall, like I said, just a well-executed weekend, really smooth. This is a brand new Mobil 1 Tundra so a good job to everyone at Kyle Busch Motorsports. This is one of the fastest Tundras I’ve had yet, and we just need to keep this momentum rolling.”

Harrison Burton, driver of the No. 18 Toyota Tundra, finished 16th

Chandler Smith, driver of the No. 46 Toyota Tundra, finished fourth

Christian Eckes, driver of the No. 51 Toyota Tundra, finished 14th

Gilliland and the No. 4 team rank eighth in the Gander Trucks Driver Championship Standings following the 11th race of the season in a tie with Sheldon Creed, 147 points behind the leader, Grant Enfinger.

Todd Gilliland and the No. 4 Mobil 1 team will return next week at Chicagoland Speedway in Joliet, Ill., on Friday, June 28. Live coverage of the Camping World 225 begins at 9 p.m. EST on FS1.