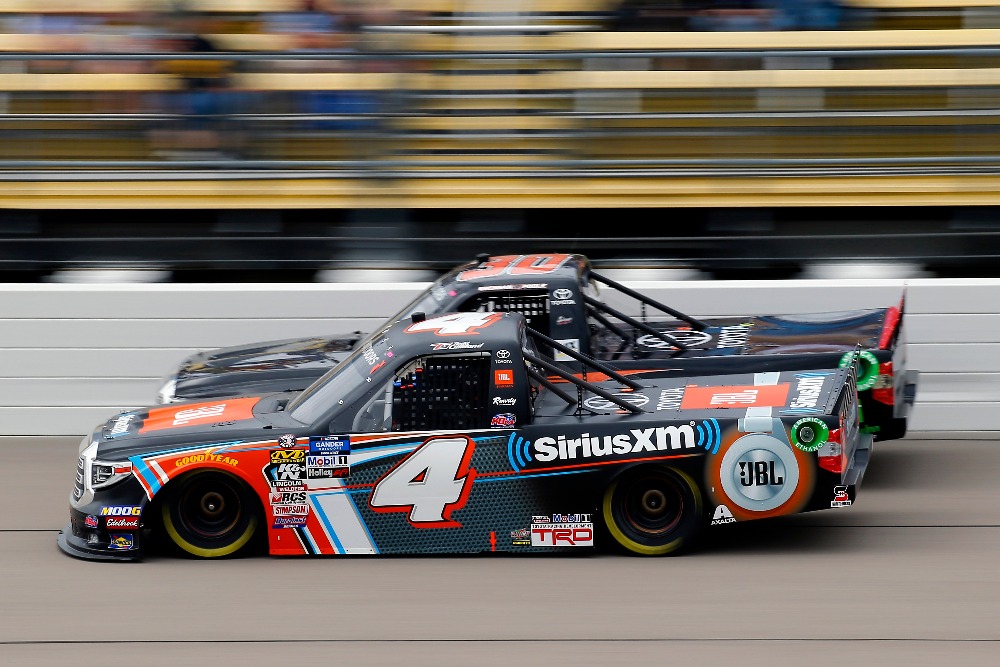 Todd Gilliland and the No. 4 JBL/SiriusXM team earned another top-10 finish on Sunday at Iowa Speedway in Newton. The young driver posted the 10th and 15th fastest laps in two practices respectively on Saturday morning. Saturday afternoon, qualifying was rained out, and the field was set by owners’ points, giving Gilliland the 11th starting position.

The race was delayed by rain until Sunday morning. Gilliland maintained a position in the top 15 for most of the race, but his JBL/Sirius XM Tundra was lacking rear grip and he was unable to gain track position. Ultimately, he finished in the 10th position after the winning vehicle of Ross Chastain was disqualified.

What happened this weekend?

“This weekend, we didn’t have the weekend we wanted. We unloaded really bad and just could never get a handle on our JBL Tundra. We battled really, really tight and in the race the front end was really tight and we just kept freeing up the back and made it a little more raceable, but still just really free on exit then and just total loss of grip. Just no grip anywhere I went. It’s very frustrating, but we’ll just keep taking the positives and keep clicking off finishes, no matter what they are, it’s better than wrecking every week. I still think there’s some stuff we can take away from it, hopefully we’ll just move on and be better next week.

Riley Herbst, driver of the No. 46 Toyota Tundra, finished 15th

Chandler Smith, driver of the No. 51 Toyota Tundra, finished eighth

Gilliland and the No. 4 team rank ninth in the Gander Trucks Driver Championship Standings following the 10th race of the season, 135 points behind the leader, Grant Enfinger. Gilliland is now 32 points out of the eighth and final playoff spot.

Todd Gilliland and the No. 4 team will return next week at World Wide Technology Raceway at Gateway, on Saturday, June 22. Live coverage of the Gateway 200 begins at 10 p.m. EST on FS1.