Time to Tackle the Tricky Triangle 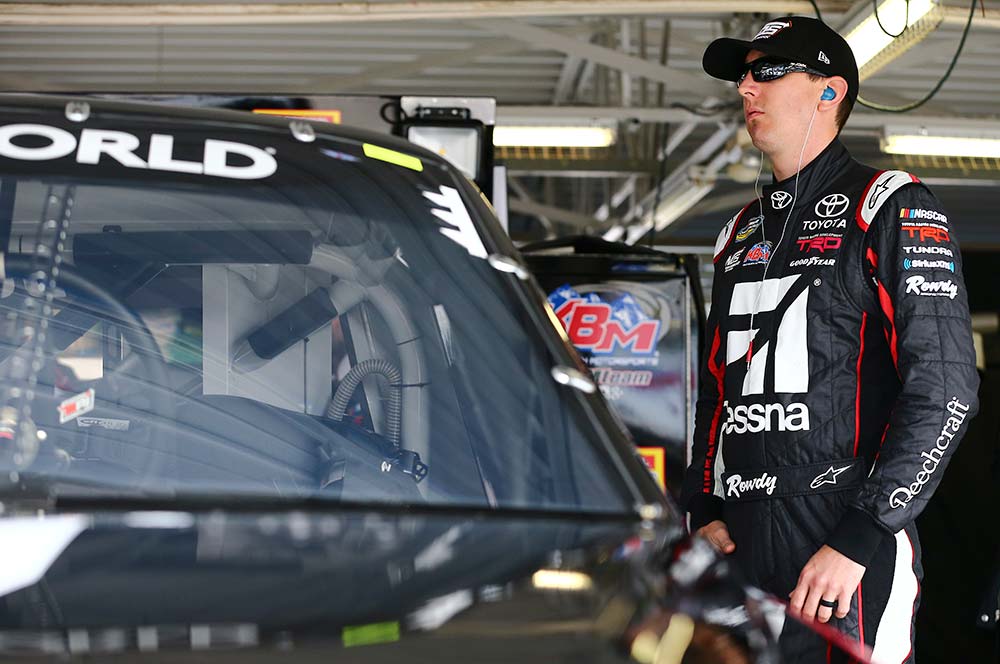 MOORESVILLE, N.C. (July 25, 2017) – There’s a reason Pocono (Pa.) Raceway is called the Tricky Triangle. First, there are only three turns on the track, instead of the typical four that make up the rest of the speedways on the NASCAR schedule. And to make it even more “tricky,” none of the three turns are identical and none of the three straightaways are the same length. But for Kyle Busch in the NASCAR Camping World Truck Series (NCWTS), Pocono Raceway is just another track he has checked off as one of his 48 wins in the series.

Owner-driver Busch has raced for KBM at Pocono twice in his career. The first time he took to the track in the Truck Series was in 2011 when he started from the second position and crossed the finish line in the runner-up position. The last time Busch piloted the No. 51 Tundra at the Tricky Triangle, he conquered the track after dominating the race. Busch took the green flag from the second position and led 53 circuits of the 69-lap race en route to the victory in an exciting green-white-checker finish.

This weekend in the Pocono Mountains, Busch will be pulling double-duty at the 2.5-mile track. Saturday, he will hop behind the wheel of the No. 51 Cessna Toyota Tundra and Sunday he will race in the Monster Energy NASCAR Cup Series (MENCS). Pocono Raceway is one of only two tracks on the MENCS schedule where Busch has yet to find Victory Lane, Charlotte Motor Speedway being the second.

Busch has two Truck Series wins this season in the No. 51 Cessna Tundra and hopes he can carry that momentum going into Saturday’s race. In his first win of 2017, Busch led 91 laps en route to the checkered flag at Kansas Speedway earlier this season. One week after that win, Busch found Victory Lane again at Charlotte Motor Speedway after leading a race-high 90 laps.

After Pocono, fans will have a chance to see Busch back on track for KBM in the No. 51 Tundra one more time on Aug. 12 at Michigan International Speedway in Brooklyn and in the No. 46 Tundra for the last time this season Aug. 16 at Bristol (Tenn.) Motor Speedway.

Saturday afternoon, Busch and the No. 51 Toyota Racing team have 60 laps to out-trick the triangle and hopefully find themselves celebrating in Victory Lane once again.

What do you hope to be able to accomplish in your final two races scheduled in the No. 51 Tundra?

“I’m looking forward to getting back behind the wheel of the Cessna Tundra for Saturday’s race at Pocono and then again at Michigan in a few weeks. We’ve been able to pick up a couple wins already this year, win some stages and put this No. 51 team in a good position for the owner’s side of the playoffs. It doesn’t get talked about much because we are one of the few teams in the Truck Series that has a team with multiple drivers and this new playoff format puts a lot more focus on the driver’s championship, but it really means a lot to everyone at Kyle Busch Motorsports that the No. 51 team will be competing for the Owner’s Championship. I have two more races scheduled with this team and my goal is to try and add more playoff points to what we’ve already earned and hopefully that will help take a little pressure off Myatt (Snider) and Todd (Gilliland) once the playoffs start later this year.”

Saturday owner-driver Kyle Busch is back in the No. 51 at Pocono, you already have two wins this season with Busch, how confident are you that your team can earn another win this weekend?

“I’m very confident that we can capture our third victory with Kyle (Busch) Saturday in Pocono. Our team has worked hard to hopefully unload a fast, new No. 51 Cessna Toyota Tundra. Pocono can definitely be tricky sometimes, but Kyle has shown success there in the Truck Series before and hopefully we can make our way to Victory Lane once again and bring home another trophy this weekend.”