Time to Get ‘Sirius’ 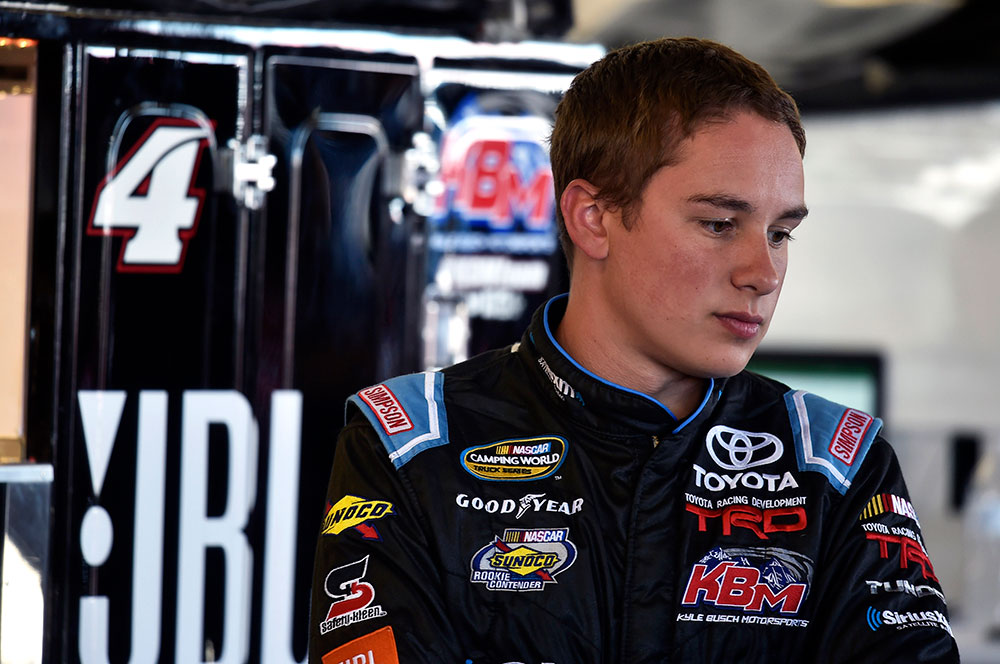 MOORESVILLE, N.C. (Sept. 20, 2016) – Christopher Bell and the No. 4 SiriusXM Racing team head to New Hampshire Motor Speedway in Loudon Saturday for the first race in the inaugural NASCAR Camping World Truck Series Chase. Bell earned a berth in the first-ever elimination-style playoffs by winning at Gateway Motorsports Park in Madison, Ill., in June and will enter the Chase as the fourth seed in the eight-driver field.

Of the three tracks that make up round one of the Chase, New Hampshire is the only track that Bell doesn’t have experience at in the Truck Series. He raced Kyle Busch Motorsports’ (KBM) Super Late Model in the Pro All Star Series at the “Magic Mile” last July, but a mechanical issue sidelined him just 11 laps into the 60-lap event.

Knowing that having a strong run in the first race of the Chase is going to be important, KBM scheduled one of their allotted rookie tests at New Hampshire in August. Bell along with his KBM teammates William Byron and Cody Coughlin each made close to 300 laps at the 1.058-mile oval to prepare for this weekend’s race. The No. 4 Toyota Racing team took KBM-25 to the test, which is the same Tundra that they will unload when practice starts for the UNOH 175 on Friday afternoon. The truck is no stranger to New Hampshire, as Kyle Busch led 67 laps with it last year before he developed a tire rub and was relegated to an 11th-place finish after a late visit to pit road.

KBM-25 is also the same Tundra that Bell picked up his lone victory of the 2016 season with at Gateway. The win at Gateway was a turning point in the season for Bell. Beginning with that race, the Oklahoma native has finished inside the top 10 in seven of the last eight events, including the win and four other top-five finishes. The only finish outside the top 10 over the last eight races for the 21-year-old was at Michigan International Speedway in Brooklyn, where he was relegated to a 24th-place finish after he wrecked while attempting a pass for the lead.

Bell ended the regular season fifth in the Truck Series point standings, 43 tallies behind his teammate and points leader William Byron. While not impossible, in years past the talented youngster would likely already be out of contention for the championship with just seven races remaining and four drivers ahead of him in the standings. The reset in points to start the inaugural Chase brings new life into the No. 4 team’s quest for a championship and they know that it’s time to get ‘sirius.’

Can you race for points in the first round of the Chase or do you have to be aggressive and go for wins right out of the box?
“I think in the first round of the Chase you can definitely race for points and you don’t have to be as aggressive in trying to get a win like you will have to in rounds two and three. However, you do have to be careful how you race people in round one because you don’t want to make any enemies as you move forward. I think for the most part you’ll see guys racing in the first round like they’ve done all year, but then when you get to Martinsville and Phoenix and having two short racks in round two, things are going to get very intense and it’s going to be very stressful.”

How much do you think you will benefit from having tested at New Hampshire earlier this year?
“After testing at New Hampshire for two days in August, I’m really excited about getting back there for the race this weekend and getting the Chase started. The two tracks that we tested at earlier this year — Atlanta and Bristol — I felt like we had the dominant truck in both of those races, so hopefully we can keep that streak going and have a really fast SiriusXM Tundra Saturday and start the Chase off with a sold finish.”

With it being the first time that the Truck Series has had a Chase, how will you approach it?
“We spent some time in our competition meeting this week talking about the Chase and we don’t really want to change our approach any, but we know that we have to be prepared for any situation that arises because points are still important — especially in the first round. I think the biggest thing is that when we don’t have a truck that’s capable of winning, we need to remind Christopher to be patient, take care of it and just have a good solid day. Last week at Chicago was a good example of that — we were struggling a little bit in the middle of the race and he avoided all the accidents and we made the truck better at the end and came away with a fourth-place finish. Those are the types of days that are going to keep you alive in the first couple rounds of the Chase.”

KBM-25: The No. 4 SiriusXM Racing team will unload chassis KBM-25 for Saturday’s UNOH 175 at New Hampshire Motor Speedway in Loudon. It’s the same Tundra Bell drove to victory at Gateway Motorsports Park in Madison, Ill., earlier this season. KBM owner-driver Kyle Busch led 67 laps with the Toyota at New Hampshire last year, but was relegated to an 11th-place finish after having to pit late in the race due to a tire rub.

Baxter’s Truck Series drivers have recorded one top-five finish and an average finish of 6.5 across two starts at New Hampshire. Darrell Wallace Jr. earned a runner-up finish for Baxter in 2014. Kyle Busch led 67 laps in last year’s event with Baxter calling the shots, but was relegated to an 11th-place finish after developing a tire rub late in the race.