They Don’t Call It ‘The Monster Mile’ for Nothing 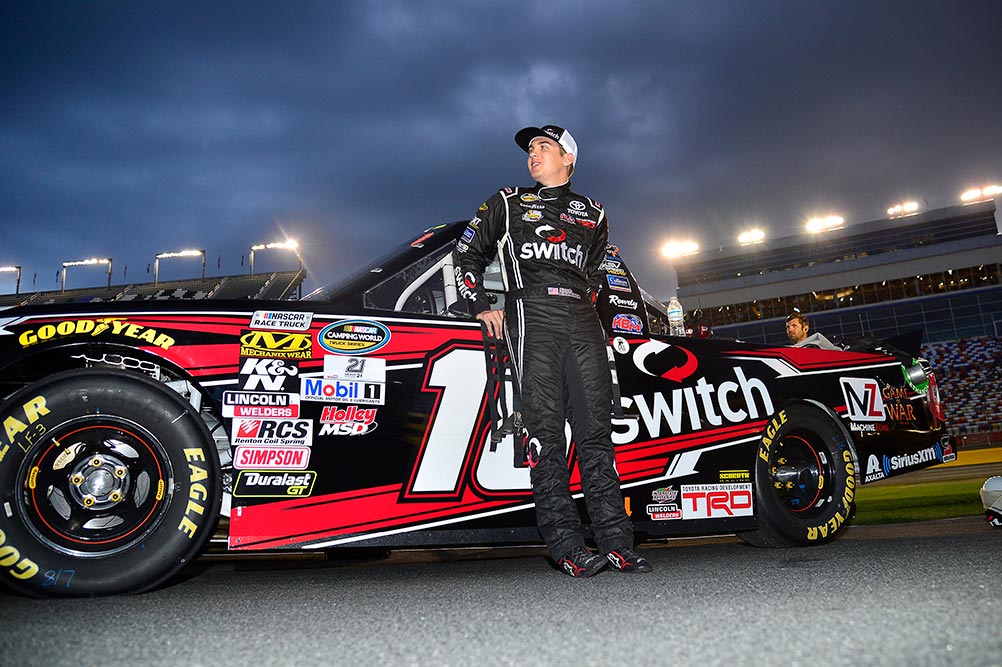 MOORESVILLE, N.C. (May 30, 2017) – Dover International Speedway has earned its reputation as “The Monster Mile.” Just when a driver thinks they have the one-mile concrete oval figured out, the Monster will sneak up and show them who is the boss. The only driver who has bested the Monster more than once in the NASCAR Camping World Truck Series (NCWTS) is the boss of Kyle Busch Motorsports (KBM), Kyle Busch. He has taken the checkered flag four times at Dover, and rookie Noah Gragson hopes to learn some of his secrets to defeat the Monster himself.

Gragson only has one prior start at Dover in last fall’s NASCAR K&N Pro Series East race. He started third, but finished 24th after a blown right-front tire took him out of contention near the halfway point of the race while running in the top five. That was when he learned how tough the Monster can be. This week he hopes to keep his No. 18 Switch Tundra out of the Monster’s grip by staying up front for 200 laps.

He has a pretty solid mentor to lean on at Dover in his team owner, Busch. Gragson, along with fellow KBM drivers Todd Gilliland and Christopher Bell spent time picking his brain and looking for advice about Dover in a recent competition meeting. Although it is unlikely Busch taught them all of the secrets of a four-time NCWTS winner, the advice he does give is a welcome learning tool.

In five NCWTS starts this season, Gragson has scored one top-five and two top-10 finishes. His top-10 finish two weeks ago at Charlotte (N.C.) Motor Speedway felt like a win after gaining five positions in the final three laps to finish ninth. Gragson will be the first to admit the intermediate tracks have been a learning experience for him understanding the aerodynamics and what it takes to pass trucks in dirty air.

This week Gragson will not back down to the Monster and look for a solid finish at Dover.

You have one start at Dover in the NASCAR K&N Pro Series East last year. What did you learn about the track?

“I learned it’s more of a challenging track than it looks. I blew a right-front tire midway through the race, but I ran consistently in the top five the first half of the race. After that I learned why they call it The Monster Mile. It grabs you pretty hard when you do get into a wreck. I do have more confidence going there this week after running the K&N race, knowing how the track transitions throughout the race and seeing where the rubber gets laid down and how the balance of the cars change.”

What has Kyle Busch told you about racing the trucks at Dover?

“We had a meeting after Charlotte and several of us rookies were bouncing questions off of him. He told us track position is key because it’s really hard to pass there, so I think getting our Tundras to work really well right around the bottom will be really important and making sure we are tight enough to start the race since the truck loosens up as the runs continue. Being able to lean on Kyle is very valuable and he certainly knows his way around Dover.”

How is racing on concrete versus asphalt?

“I feel like there is more grip on the concrete initially. You always have to keep fighting for grip. Last year in the K&N race I kept moving up the track and gaining more grip. It seemed to work in the K&N cars where there is a little less horsepower than the trucks. In the trucks, there will be guys who can move up once they start getting tight, so getting your truck working on the bottom will be the best.”

What will be Noah’s biggest challenge at Dover?

“I think running a truck there will be similar to what he experienced in the K&N race last year. The truck has way more downforce so he’ll probably have a lot more throttle so he’ll carry a lot more speed. We just need to get him up to speed quickly since we only have two one-hour practices. We’ve got a lot to work on to get the Switch Tundra dialed in for the race.”

What will you focus on during practice to help him prepare for the race?

“The first practice we will definitely just be focused on making laps and getting Noah comfortable in the truck and on the track. In the second practice, hopefully we can work on the truck and get it to where it has a good balance to start the race.”

KBM-036: The No. 18 Switch team will race KBM-036, for Friday’s Bar Harbor 200 at Dover International Speedway. This Tundra was built in 2016 and raced twice, once by Kyle Busch at Charlotte (finished second) and by Harrison Burton at Martinsville (finished 22nd).

Richmond has four top-five and five top-10 finishes in eight starts as a NCWTS crew chief at Dover. His best finish was second with Cole Whitt in 2011. He also has one pole with Kevin Harvick in 2010.