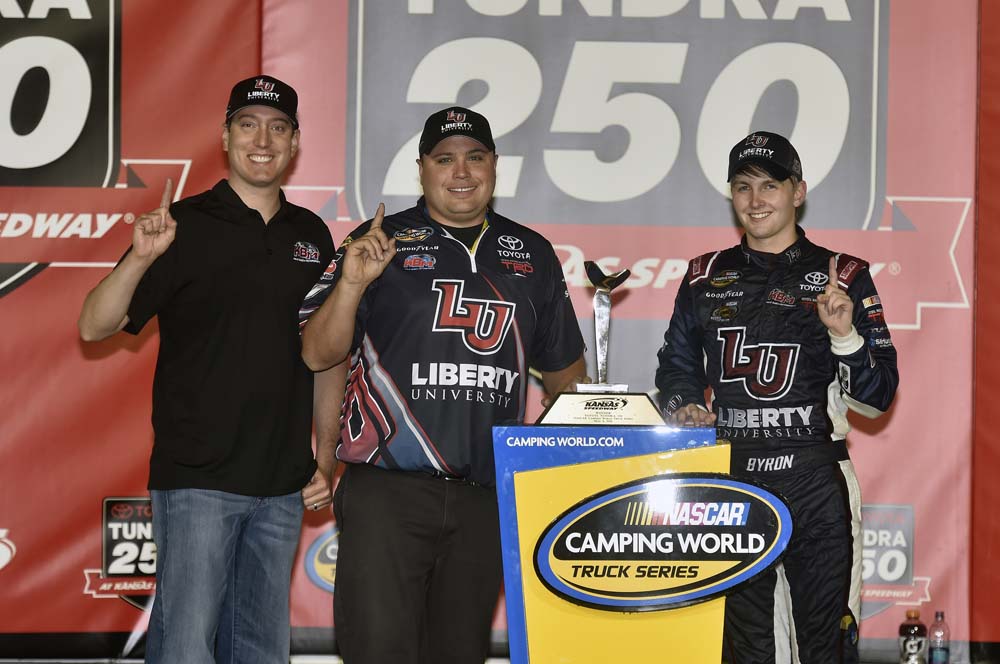 In only his fifth start in the NASCAR Camping World Truck Series (NCWTS), rookie driver William Byron made a name for himself by driving his No. 9 Liberty University Tundra to victory lane Friday night at Kansas Speedway in the Toyota Tundra 250. Byron regained the lead on the wild final lap in a green-white-checker finish at the 1.5-mile track.

Starting on the front row from second place, Byron ran in the top five much of the night. With 50 laps to go he was running second and was told to save fuel waiting for the caution clock to bring out the yellow flag. Just as the caution flew, other trucks began to run out of fuel which kept pit road closed for several laps. Byron ran on the apron to keep his fuel level up, but there were some nervous moments waiting for him in the pits. Once pit road finally opened, Byron had enough fuel to bring the Liberty University Tundra to the pits for four tires and fuel. He restarted fourth, but didn’t stay there for long.

Byron was third for a restart on lap 135 and he got an amazing run which moved him into the lead for the first time in his NCWTS career. With the laps winding down, he began to pull away from the field. Nobody on the Kyle Busch Motorsports (KBM) team wanted to see a caution in the final laps, but sure enough, it came in the final 10 laps.

With only a green-white-checker finish to decide the race, Byron had to get a good restart. When the race resumed he was shuffled back to third and it seemed as though victory had slipped away from him. As the first two trucks battled for the lead they made contact and wrecked, which gave Byron the opportunity he needed to drive past them and resume the lead on the only lap that really counts – the final lap. Byron took the checkered flag for his first-ever NCWTS win.

“It was crazy the last couple of restarts and I had the lead there on the green-flag run and I was just really praying for no cautions,” Byron said in victory lane. “You have to earn it and my crew chief, Rudy Fugle, really reminded me about that on all the restarts. I just can’t thank Liberty University and Toyota enough. This is a dream come true. I was six-years-old watching Truck races and I didn’t start racing until I was 14, and just to be in a KBM Toyota Tundra like this is amazing.

“I didn’t even know how to do a burnout, so I just kind of found the gears and watched the smoke in the back and it was just really cool. I’ve visualized this for a little bit, but I never thought it would come like this.”

“I think this night is unprecedented for William Byron for sure,” said owner Kyle Busch. “Just the limited experience that he does have in the Truck Series and the limited experience he has in racing in general, I’m very impressed with the way he’s been able to drive the vehicles he’s driven over the years, the success that he’s had in those races and being able to move up the ladder as quickly as he has and to be with KBM.”

Byron was followed across the finish line by Matt Crafton, Daniel Hemric, KBM teammate Christopher Bell and Sprint Cup driver Clint Bowyer rounded out the top five. His other KBM teammate Cody Coughlin was 27th. The win propelled Byron up to seventh in the driver point standings and gives him a spot in the inaugural NCWTS Chase.

The Truck Series continues next Friday, May 13 at Dover International Speedway. Live coverage of the Truck Series race will air on Fox Sports 1 at 5:30p.m. ET.