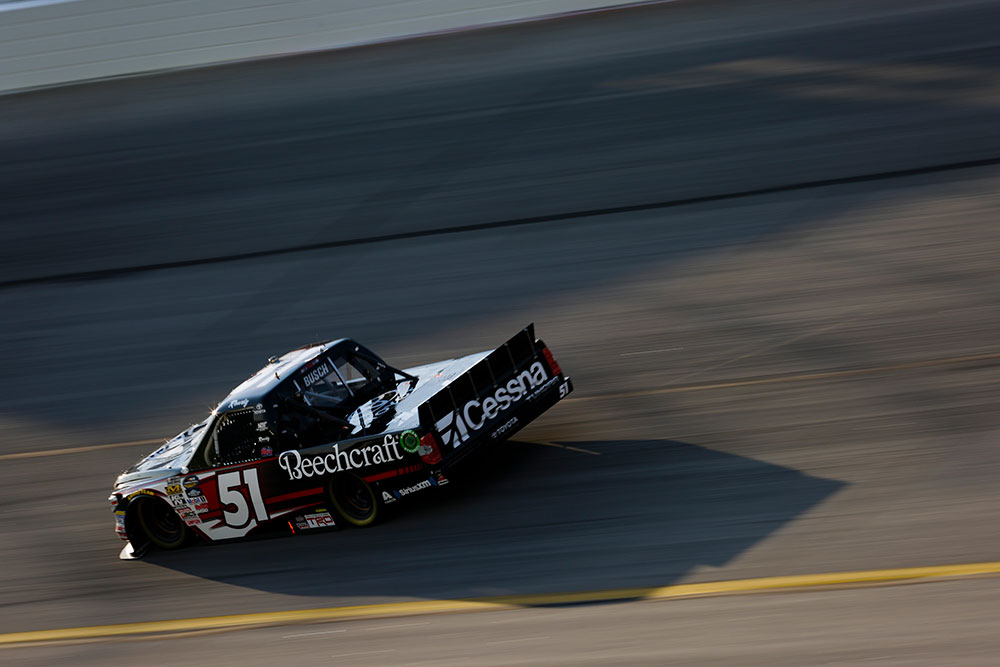 MOORESVILLE, N.C. (May 9, 2017) – When Kyle Busch sits behind the wheel of a NASCAR Camping World Truck Series (NCWTS) KBM Toyota Tundra, he is known to stir up a storm and put on a show. The owner-driver is a wizard in the NCWTS with 46 wins, second all-time in the history of the series. The last time Busch found himself following the “yellow-brick road” of the 1.5-mile Kansas track for KBM, it took him all the way to Victory Lane.

Busch’s last and only truck-series win at Kansas Speedway came in 2014. The Las Vegas-native started the race from the pole position and led 104 laps of the 167-lap race. He crossed the finish line three seconds ahead of the field and captured the checkered flag in only his third NCWTS start at Kansas. In 2016 Busch took the track by storm and led 69 laps en route to his first Monster Energy NASCAR Cup Series (MENCS) win at Kansas Speedway. “Rowdy” has also collected four wins in the NASCAR XFINITY Series in the Sunflower State, including the last three events (2014-2016).

Kansas will be a double-duty race weekend for the 32-year-old. Busch will attempt to sweep the weekend as he pilots the No. 51 Cessna Toyota Tundra in the NCWTS Toyota Tundra 250 Friday night and races for the win in the MENCS Go Bowling 400 Saturday evening. Later in the season, fans will have a chance to see Busch back on track for KBM in the No. 51 Tundra on May 20 at Charlotte (N.C.) Motor Speedway, July 29 at Pocono (Pa.) Raceway and Aug. 12 at Michigan International Speedway in Brooklyn.

There’s no place like Kansas, but for Busch it will take more than just clicking his heels together to bring home the win this weekend. There is no doubt that the whole No. 51 KBM team has the heart, the brain and the courage, and they hope to call Kansas the “home” of their next win.

How did the open test at Charlotte Motor Speedway go last week?

“The open test at Charlotte last week was a great opportunity for me to work with Bono (Manion, crew chief) and the rest of the guys on the No. 51 team, as well as the other two teams at KBM as we continue to work on improving our mile-and-a-half package. It was perfect timing for the test as three of the next four races on the Truck Series schedule will be at mile-and-a-half tracks. Our Cessna Tundra was decent at Atlanta earlier this year, but it wasn’t quite a winning truck. I feel like we made some gains during the test last week and we’ll be ready to go out and compete for the win on Friday night.”

Are you looking forward to this week’s Truck Series race at Kansas?

“I’m looking forward to a great race week in Kansas. We’ll get things started on Wednesday at Textron Aviation’s corporate headquarters in Wichita, where we’ll show our appreciation to the employees from the Cessna, Beechcraft and Hawker brands that are represented on our No. 51 Tundra this season by providing lunch and giving those folks an up-close look at the truck that I’ll be racing at Kansas Speedway Friday night.  As far as Kansas goes, KBM has had really fast Tundras there since they repaved the track in 2013, including wins two of the last three years and in 2015 when we didn’t win, Erik Jones dominated a race that ended up being decided by fuel strategy. So, between the recent success we’ve had at Kansas and the gains we made at the Charlotte test last week I feel really good about our chances of getting to victory lane on Friday night and being able to celebrate with all of our guests from Textron Aviation that will in attendance.”

This weekend Kyle Busch is behind the wheel, what are your thoughts about the race?

“I’m really looking forward to having Kyle back in the truck this weekend in Kansas. After the six-week break we’ve had, the whole No. 51 team is ready to get back to the track. We’ve prepared a fast truck and with Kyle behind the wheel I know we have a good chance to find ourselves in Victory Lane Friday night.”

Manion’s lone Truck Series race at Kansas resulted in a 27th-place finish with Cody Coughlin last season.  He earned one pole and one top-10 finish in two XFINITY Series starts with Martin Truex Jr., and one top-10 finish across 14 starts calling the shots at the 1.5-mile track in the Monster Energy NASCAR Cup Series.