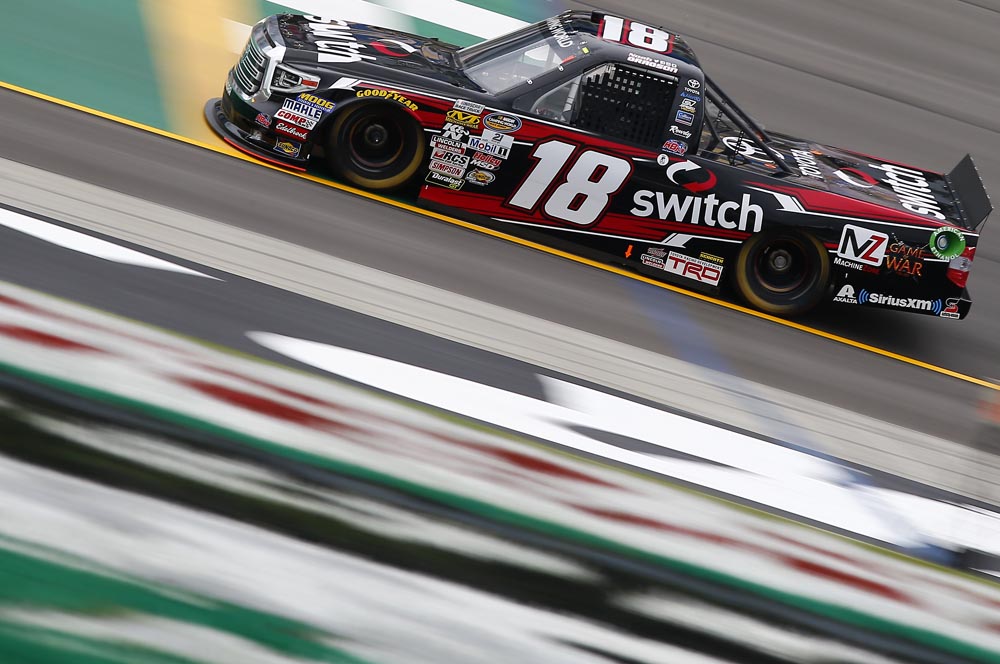 MOORESVILLE, N.C. (Sept. 26, 2017) – In sports it is usually considered an advantage for a team to play at home. Everything is familiar and the fans are rooting for the home team. This weekend, Noah Gragson gets to experience that feeling racing at Las Vegas (Nev.) Motor Speedway. Although he has never turned a lap at the 1.5-mile oval, he started his career racing next door at The Bullring. In fact, he won there earlier this month. Will the home field advantage help Gragson achieve his first win in the NASCAR Camping World Truck Series (NCWTS) Saturday night? He sure hopes so.

Gragson began racing Bandoleros and eventually late models there at the age of 13 at The Bullring. He earned 14 wins there, including the most recent one on Sept. 9 in the 50-lap NASCAR Super Late Model race. If Gragson can take the checkered flag in the Las Vegas 350, it would also be a hometown win for his owner, Kyle Busch. Much like Gragson, Busch began his driving career shortly after his 13th birthday at The Bullring. From 1999 through 2001, Busch won over 65 races in legends cars and two track championships there, before moving up to late models. Busch scored 10 victories in late model competition at The Bullring during the 2001 season.

Not only is Las Vegas the hometown of Gragson and Busch, but also the team’s sponsor, Switch. Founded in 2000, this global technology solutions company, headquartered in Las Vegas, is built on the intelligent and sustainable growth of the internet. Switch Founder and CEO Rob Roy has developed more than 260 patent and patent-pending claims covering data center designs that have manifested into the company’s world-renowned data centers and technology solution ecosystems. Gragson and the No. 18 Kyle Busch Motorsports team will tour the Switch facility on Friday before getting to work at the track on Saturday.

Gragson is looking forward to his first race under the lights at the big track, after seeing it in the distance from The Bullring early in his career. He will have 146 laps to enjoy the home-track advantage and knowing he is the local favorite. It will be a night he won’t soon forget, especially if he can cap it off with his first NCWTS win.

What would it mean to win your first race at Las Vegas in front of your hometown crowd?

“That would be the coolest thing I’ve ever done. It would mean everything to me since I’ll have a lot of family, friends and Switch employees at the race supporting me. There is no better place to do it than under the lights at Vegas. It will be my first time racing on the big track. I’ve never even made a lap around there in a pace car, or anything. Winning there would be really, really cool.”

Do you have anything special planned for your team while they are visiting your hometown?

“Since they don’t have to be at the track on Friday, we are all going to tour the Switch facility located in Las Vegas so they can learn about and see what an amazing facility it is. Then they are going to Speed Vegas in the afternoon to drive some pretty incredible cars. I can’t wait to hang out with my guys in my hometown and show them why I love it here so much. It will be a great chance to have some fun together before we get back to work at the track on Saturday.”

Will you get to spend some time at home while you are in town for the race?

“I flew to Vegas on Monday afternoon so I could sign autographs at a trade show and have dinner with some sponsors. I think my Mom made a dentist appointment for me while I’m home, which won’t be a highlight of the trip. I’ve got some media appearances with the track on Thursday and Friday. I’ll be up early Thursday going to a few local radio and television stations around town, and then going with a few of the other drivers to the Golden Knight’s practice facility to learn a bit about hockey. Growing up in Vegas I haven’t been around too much ice, so that should be interesting.”

You have raced in Las Vegas several times, but is it different when it’s the driver’s hometown?

“I think it’s pretty cool to go to a driver’s hometown track. He’ll have a lot of family and friends in the stands, and it’s actually Switch’s home track too since they are based in Las Vegas and Reno. There will be a lot of people there cheering for us and hopefully we’ll have a good showing for everyone involved. I know it would mean the world to Noah to get his first win there.”

KBM-042: The No. 18 Switch team will race KBM-042, for Saturday’s Las Vegas 350. Gragson has raced this truck four times this season resulting in one top-five and three top-10 finishes.

Richmond has four top-five and six top-10 finishes in 10 starts as a NCWTS crew chief at Las Vegas. His teams’ best finish was second with driver Timothy Peters in 2015.