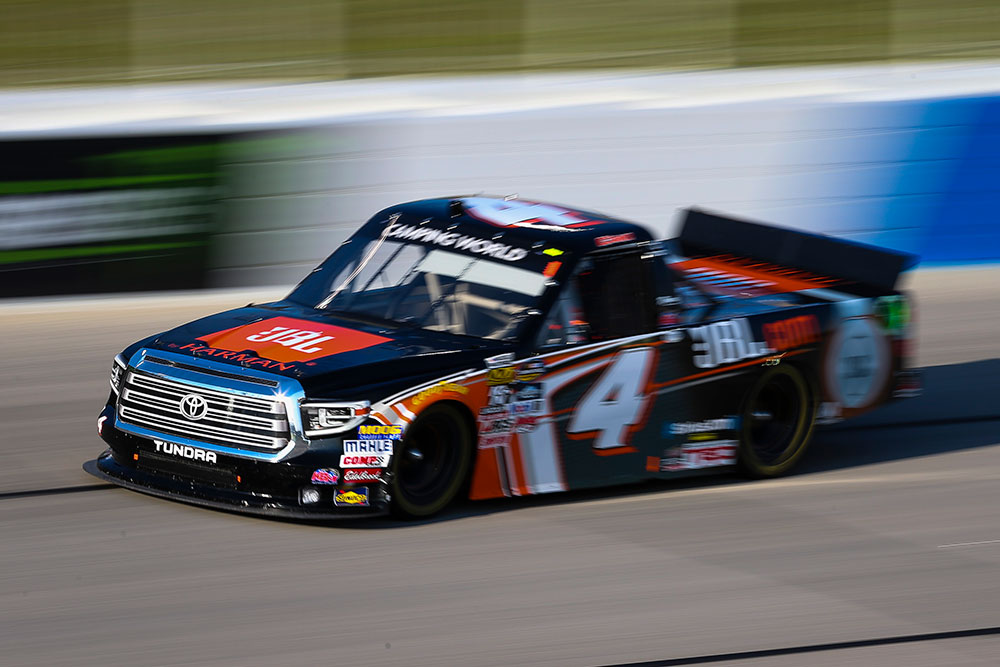 MOORESVILLE, N.C. (May 30, 2017) – The next stop on the 2017 NASCAR Camping World Truck Series for Christopher Bell and the No. 4 JBL Racing team will be Dover (Del.) International Speedway for Friday’s Bar Harbor 200. Bell’s main focus will be continuing his strong start and pursuit of the Truck Series championship, but as the veteran driver in Kyle Busch Motorsports’ stable he will also have three young teammates leaning upon his experience this weekend.

Friday’s 200-lap race will be Bell’s 36th Truck Series start since making his debut at Iowa Speedway in Newton in June of 2015 as part of a seven-race schedule that season. The open-wheel dirt standout has delivered three wins, three poles, 15 top-five and 25 top-10 finishes resulting in average finish of 9.1 across his first 35 starts in NASCAR’s third division.

Bell can testify to his young teammates that success in the Truck Series doesn’t always come overnight. Across his first 10 starts, the Oklahoma native produced an average finish of 14.40 and including his win on the dirt at Eldora Speedway in Rossburg, Ohio finished inside the top 10 just three times. After a tough start to his first full-time campaign last season, something clicked and the talented youngster has become one of the most consistent drivers in the Truck Series.  Over his last 20 starts, dating back to last year’s race at Kansas Speedway in Kansas City, the 22-year-old has posted an average finish of 7.04 and recorded 13 top-five and 17 top-10 finishes.  For comparison, KBM owner-driver Kyle Busch’s average finish of 7.05 is tops all-time in the Truck Series for drivers with a minimum of 100 career starts.

Despite trailing reigning Truck Series champion Johnny Sauter by 15 points in this year’s championship standings, one could argue that Bell has been the most impressive wheelman in NASCAR’s third division in 2017. Over the first five races on the schedule, he has collected the pole three times and leads all Truck Series regulars in several key statistical categories including, average start (2.6), average finish (3.8), driver rating (120.8), laps led (240) and fastest laps run (117). The Toyota Development driver carried over his hot start to the NASCAR XFINITY Series last weekend at Charlotte (N.C.) Motor Speedway where he delivered a fourth-place finish in his series debut for Joe Gibbs Racing.

With Kyle Busch on the sidelines as a driver in the Truck Series Friday, Bell will be taking over the veteran driver role for KBM. The talented wheelman is also hoping to take over the role of getting a KBM Tundra to victory lane, which Busch has handled at each of the last two stops on the Truck Series schedule.

Can you evaluate how your truck season has gone through the first five races?

“I feel like my truck season has been great, I feel like it’s great and we haven’t finished outside the top-10 yet. We finished inside the top five every time except for one, so that being said, (Johnny) Sauter has had a better year, he’s still beating us in points. We have to do a little bit to catch up there, but I feel like it’s there. He’s just been able to execute the stage racing a little better where we’re giving up on stage points to try to win races and he has been able to get those stage points and still contend for wins as well. We have to work on our speed a little bit on tracks like Kansas and Charlotte, I felt like we were a second-place truck at Charlotte and a third-place truck at Kansas once the green flag flew. We have practice speed and we have qualifying speed, but we have to do a better job of going faster in the race.”

How does it feel to be the veteran of KBM’s group of drivers this weekend being just 22 yourself?

“Times have changed that’s for sure. When I made my first start in the Truck Series I was a little bit of an older rookie because I didn’t make my first start until I was 20. Now two years later, I’ll be the veteran of the KBM group this weekend at Dover. All three of my teammates this weekend are super talented and I expect them to be running up front right alongside me.”

How important is track position at Dover and how will the stage racing affect your strategy for Friday’s race?

“Track position is always important in truck racing, but even more so at Dover. It’s almost more important to have track position over good tires. We’ll see how it plays out with the stage racing — the first two stages are pretty short, so those everyone will probably play straight up. The last one you’ll have to make a pit stop and it’ll be fun to have to see the strategies of when everyone decides to make that last stop. We’ve been really good at Dover in the past, so we’re heading into this race looking to bring another Miles the Monster trophy back to KBM.”

KBM-41: The No. 4 JBL Racing team will unload KBM-41 for Friday’s Bar Harbor 200 at Dover (Del.) International Speedway. This is the first time that the Toyota has raced in 2017. The Tundra won its maiden voyage last September at Chicagoland Speedway in Joliet, Ill., when Kyle Busch led 95 of 151 laps en route to victory.

Ryan “Rudy” Fugle begins his fourth season as a crew chief at KBM and sixth overall with the organization.  The New York native has guided his team to an Owner’s championship in all three of his seasons (2013, 2015 & 2016) atop the pit box at KBM, including a combined Owner’s/Driver’s Championship with Erik Jones in 2015. His drivers have combined for 17 wins, 12 poles and 37 top-five finishes across his 73 races calling the shots for the organization. Under his tutelage last season, William Byron collected a Truck Series’ rookie record seven wins while leading the No. 9 Tundra team to KBM’s fourth consecutive and fifth overall Owner’s championship.

Fugle’s NCWTS drivers have posted one win, 180 laps led, two top-five and two top-10 finishes resulting in an average finish of 10.0 across four starts at the Monster Mile. Kyle Busch led 50 laps en route to victory with Fugle calling the shots in the 2013 event.