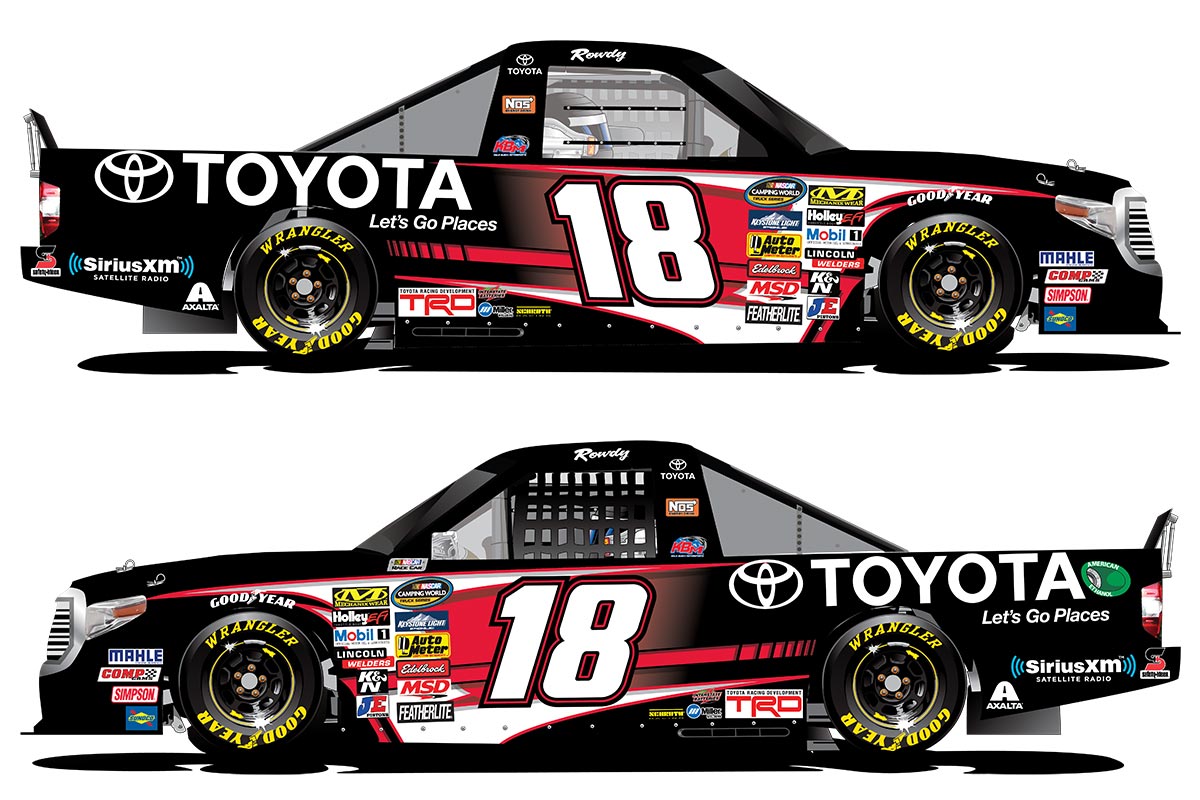 MOORESVILLE, N.C. (March 28, 2016) –  Kyle Busch will make his first of four scheduled NASCAR Camping World Truck Series starts this season in Saturday’s Alpha Energy Solutions 250 at Martinsville (Va.) Speedway. It will mark Busch’s first Truck Series start at the .526-mile oval since he produced a runner-up finish in October of 2011.

Kyle Busch Motorsports’ (KBM) owner-driver is also scheduled to be behind the wheel of the No. 18 Toyota Tundra at Charlotte (N.C.) Motor Speedway May 20, Kentucky Speedway in Sparta July 7 and Bristol (Tenn.) Motor Speedway Aug. 17. Toyota will be the primary sponsor for all four of his Truck Series starts in 2016.

Martinsville is the only active track on the schedule in NASCAR’s top three divisions that Busch has yet to collect a victory at in at least one of the series and the only active track on the Truck Series schedule where he has made a start and not visited victory lane. The Las Vegas native has knocked on the door of victory several times across 30 combined starts (21 NSCS, one NXS & eight NCWTS) at the challenging track known as “The Paperclip,” including a runner-up finish among nine top-five finishes in the NASCAR Sprint Cup Series and runner-up finishes in each of his last two starts in the Truck Series.

“Rowdy” has scored a combined 156 victories across NASCAR’s top three divisions and in the process assembled a diverse collection of trophies, but the missing link to having at least one trophy from every active track he has made a start at in is a grandfather clock from Martinsville. With working double-time this weekend, he’ll have two chances to add the missing piece to his collection before he clocks out on Sunday.

Kyle Busch, driver of the No. 18 Toyota Tundra:

It’s been a few years since you’ve raced a truck at Martinsville, are you looking forward to this weekend?

“Any time that I can get behind the wheel of one of our Tundras I always enjoy it and look forward to racing in the Truck Series. With having a couple of young guys driving for us at KBM this year it will be a great opportunity to work alongside of them as a teammate. It’s a lot easier to answer any questions they might have when you are actually in the truck at the same time and experiencing some of the same things, as opposed to giving them direction based on your past experiences. It will be especially helpful this weekend, since I haven’t raced in a Truck Series race at Martinsville since 2011. The last two or three times that I did race the trucks at Martinsville we came really close to getting a win and collecting a grandfather clock — hopefully we can finish it off this time. I’ve been able to get to victory lane as an owner at Martinsville, but not as a driver, so the goal this weekend is to change that and hopefully leave with a pair of them.”

Wes Ward, crew chief of the No. 18 Toyota Tundra:

With running a limited schedule, how much do you rely upon the three full-time teams?

“The fourth team is definitely a group effort from everyone at KBM. We follow the lead from the three full-time teams and then we take myself, some of the shop guys and the engineer from the Super Late Model team to the track and make it happen. Obviously when Kyle is driving your truck you know he’s going to give it everything he’s got, so we expect to run up front and compete for the win. We’ll work hard, have some fun and hopefully come home with a grandfather clock.”

Veteran crew chief Wes Ward is currently in his second season at Kyle Busch Motorsports, where in addition to overseeing the efforts of the No. 18 team’s part-time schedule this season, he serves as the shop foreman. The North Carolina native became a fixture in the NASCAR XFINITY Series garage beginning in the late 1990’s and over the course of 16 years called the shots for over 300 races working with notable drivers such as Dale Jarrett, Kasey Kahne, Kenny Wallace, Jason Keller and Brad Keselowski. Ward’s lone XFINITY Series win came with Kahne behind the wheel in the 2003 series finale at Homestead-Miami (Fla.) Speedway.