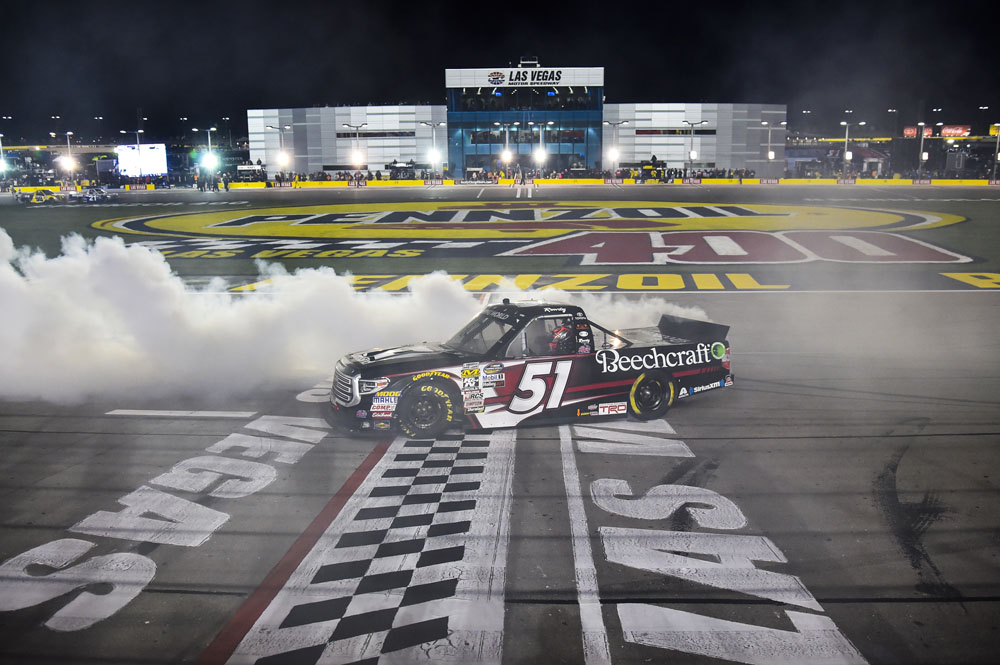 MOORESVILLE, N.C. (Jan. 28, 2019) – Kyle Busch Motorsports (KBM) announced today that owner-driver Kyle Busch will pilot the No. 51 Toyota Tundra in five NASCAR Gander Outdoors Truck Series (NGOTS) events in 2019. Busch’s Toyota will carry primary sponsorship from Textron Aviation Inc., the leader in general and business aviation that provides its customers with the most versatile and comprehensive product portfolio in the world. KBM will promote Textron Aviation’s Cessna and Beechcraft brands.

Busch enters the 2019 season with 51 Truck Series victories, tying for the most in series history and with 194 all-time combined NASCAR national series wins he ranks second to NASCAR Hall of Famer Richard Petty (200). The Las Vegas native has been victorious in a remarkable 35.2 percent (51/145) of his Truck Series starts since debuting in NASCAR’s third division in 2001 and has finished first or second 53.1 percent (77/145) of the time. With his win last year at Las Vegas, he now has a victory at every active track that he’s competed at in the NGOTS.

‘Rowdy’ collected two wins and four top-five finishes across five Truck Series starts in 2018 and has taken Textron Aviation’s brands to victory lane four times in 10 starts since the partnership began in 2017.

“I’m thankful to Textron Aviation and the Cessna and Beechcraft brands for coming aboard the No. 51 Tundra for five races again this season,” Busch said. “We’ve been able to celebrate with them in victory lane twice in each of the first two seasons of the sponsorship so we’ll see if we can top that number this year and if so, we’ll be starting it off with a historic one.

“The Truck Series is always a lot of fun for me as a driver. And as an owner, it gives me the opportunity to work alongside the young drivers that we have at KBM to get a better understanding of what they are experiencing. From year to year rule changes affect the handling of the trucks. By continuing to be an active driver in the Truck Series I’m able to provide better feedback to our young drivers not only on the weekends I’m racing, but on the weekends when I’m coaching from atop the pit box as well.”

Announcements for the rest of the driver lineup that will share driving duties behind the wheel of the No. 51 Tundra with Busch are forthcoming.

Textron Aviation Inc. is the leading general aviation authority and home to the Beechcraft, Cessna and Hawker brands, which account for more than half of all general aviation aircraft flying. The Textron Aviation brands represent unrivaled innovation, performance and leadership in the industry, and offer an unmatched value proposition rooted in the total ownership experience. Leveraging unparalleled speed-to-market, Textron Aviation provides the most versatile and comprehensive business and general aviation product portfolio in the world through five principal lines of business: business jets, general aviation and special mission turboprop aircraft, high performance piston aircraft, military trainer and defense aircraft and a complete global customer service organization. Textron Aviation has delivered more than 250,000 aircraft in over 143 countries. Its broad range of products include such best-selling aircraft as Citation business jets, King Air and Caravan turboprops and T-6 military trainer aircraft, all of which are backed by the industry’s most capable global service network. For more information, visit www.txtav.com.