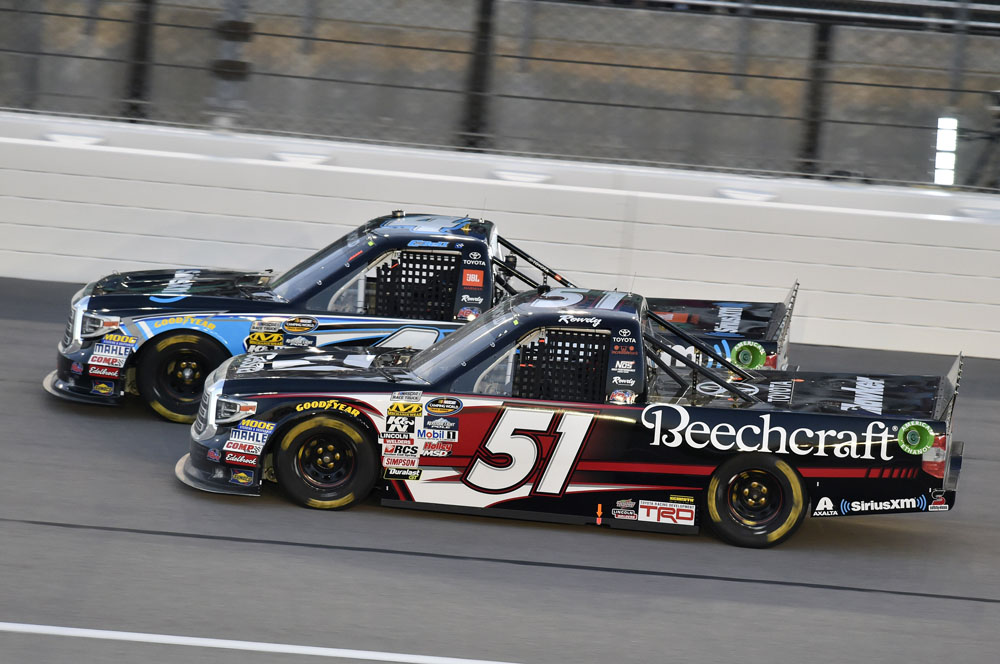 MOORESVILLE, N.C. (Jan. 11, 2018) – Kyle Busch Motorsports (KBM) announced today that owner-driver Kyle Busch will compete in five NASCAR Camping World Truck Series events in 2018. Busch’s Tundra will carry primary sponsorship from Textron Aviation, an aircraft industry leader that provides its customers with the most versatile and comprehensive general aviation product portfolio in the world. He will race twice behind the wheel of the No. 4 Tundra and three times in the No. 51 Tundra. KBM will promote Textron Aviation’s Cessna and Beechcraft brands through the partnership.

Busch enters the 2018 season second on the Truck Series all-time win list with 49 and is two wins shy of moving into a tie for first. The Las Vegas native has been victorious in a remarkable 35 percent (49/140) of his starts since debuting in NASCAR’s third division in 2001 and has finished first or second 52.1 (73/140) percent of the time. ‘Rowdy’ collected three wins, four top-five and five top-10 finishes across seven Truck Series starts in 2017. With 182 all-time combined NASCAR national series wins, he ranks second to NASCAR Hall of Famer Richard Petty (200).

“Our partnership with Textron Aviation and the Cessna and Beechcraft brands got off to a great start last year with two trips to victory lane and we have our sights set higher this year,” Busch said. “There are a couple of really cool things happening with my truck schedule this year — two of my races will be in the No. 4 Tundra, which was the number on my first Legends car back at the Bullring, and I’ll also be racing a truck at Las Vegas for the first time since 2001. It’s always fun to race in my hometown and it’s the only active track on the Truck Series schedule where I’ve made a start and haven’t visited victory lane — so hopefully we can change that in March.”

Textron Aviation Inc. is the leading general aviation authority and home to the Beechcraft, Cessna and Hawker brands, which account for more than half of all general aviation aircraft flying. For more than 90 years, the Textron Aviation brands have represented unrivaled innovation, performance and leadership in the industry, offering an unmatched value proposition rooted in the total ownership experience. Leveraging unparalleled speed-to-market, Textron Aviation provides the most versatile and comprehensive business and general aviation product portfolio in the world through five principal lines of business: business jets, general aviation and special mission turboprop aircraft, high performance piston aircraft, military trainer and defense aircraft and a complete global customer service organization. Textron Aviation has delivered more than 250,000 aircraft in over 143 countries. Its broad range of products include such best-selling aircraft as Citation business jets, King Air and Caravan turboprops and T-6 military trainer aircraft, all of which are backed by the industry’s most capable global service network. For more information, visit www.txtav.com.

Since debuting in 2010, Kyle Busch Motorsports (KBM) has quickly established itself as one of the most successful teams in all of NASCAR. Owned by 2015 Cup Series champion Kyle Busch and fueled by his passion for winning, the organization holds the Camping World Truck Series records for most career wins (65) and most wins in a single season (14 in 2014). In addition to collecting a series-record six Owner’s Championships, the organization has produced two championship-winning drivers; Erik Jones (2015) and Christopher Bell (2017).

KBM prepares a fleet of race-winning Toyotas out of its state-of-the art 77,000-square-foot facility in Mooresville, N.C. Fans can stay up-to-date with all the latest KBM news online at www.KyleBuschMotorsports.com, by liking the team on Facebook (KBMteam) and by following the team on Instagram (KBMteam), Snapchat (KBMteam) and Twitter (@KBMteam).