Stock on the Rise 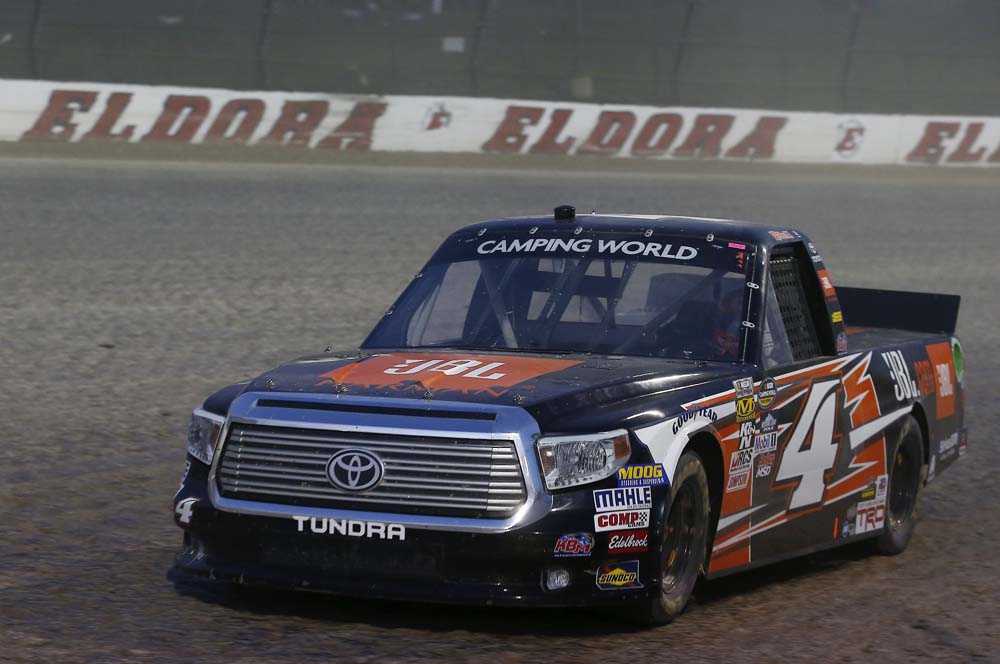 MOORESVILLE, N.C. (July 17, 2017) – The NASCAR Camping World Truck Series heads to famed Eldora Speedway in Rossburg, Ohio this week for Wednesday’s night’s Fifth Annual Eldora Dirt Derby. Christopher Bell, who won the event in 2015, will be looking to add to his series-leading three wins in the race which will be aired on the Fox Business Network.

The 22-year-old driver, who cut his racing teeth on dirt tracks around the country, has seen his NASCAR stock on the rise in 2017. Bell enters Wednesday night’s event second in the Truck Series championship standings, 28 points behind reigning champion Johnny Sauter, but leads the circuit in wins (three), poles (three), playoff points (19), laps led (492), driver rating (118.6) and fastest laps run (209). The Oklahoma native has also made two starts for Joe Gibbs Racing in the NASCAR XFINITY Series bringing home a fourth-place finish in his debut at Charlotte (N.C.) Motor Speedway in May and most recently earning the pole and leading a race-high 152 laps at Iowa Speedway in Newton before being relegated to a 16th-place finish after getting caught up in an accident while leading with 80 laps to go.

While his NASCAR stock is on the rise, Bell continues to keep his racing portfolio diversified by competing in dirt races around the country when his schedules allows him to do so. The talented wheelman got a jump start on the competition at Eldora this past weekend running three shows with the World of Outlaws Sprint Car Series at the half-mile clay oval. He was victorious in the Knight Before the Kings Royal Friday night. Saturday night an engine problem in his heat left him with a 20th starting position for the prestigious Kings Royal feature, but he managed to wheel his car all the way to a runner-up finish despite the fact the 40-lap event proceeded caution free from green to checkered.

Bell’s win at Eldora Friday night was his third time he’s cashed in driving a Sprint Car in 2017. He also won the Lou Blaney Memorial All-Star Circuit of Champions event at Sharon (Ohio) Speedway on July 8 and the NRA Sprint Invaders feature at Limaland Motorsports Park in Lima, Ohio on April 21. He also has five Midget victories on dirt in 2017, starting off with the prestigious Chili Bowl Midget Nationals at Tulsa (Okla.) Expo Raceway in January. He then swept both features at the Fourth Annual POWRi Lucas Oil National Midget Turnpike Challenge at I-44 Riverside Speedway in Oklahoma City, Okla., in March and won consecutive USAC Midget National events at Macon (Ill.) Speedway and Lincoln (Ill.) Speedway on July 1 and 2.

Eldora Speedway is Bell’s “favorite racetrack in the whole world” and the track where he put himself on the NASCAR map. In just his third career Truck Series start he led 106 of 154 laps to earn his first NASCAR Camping World Truck Series victory. Last year, Bell managed a runner-up finish behind fellow dirt standout and current NASCAR Monster Energy Cup Series star Kyle Larson. With his NASCAR stock on the rise, the talented wheeleman hopes to earn Truck Series victory number four of 2017, gain valuable playoff points and continue on his quest to winning his first NASCAR championship.

How does it feel heading into Eldora as the only returning series regular that has a win at the half-mile dirt track?

“It’s great. Eldora is my favorite racetrack in the whole world. I grew up running a lot of laps there. I think over my dirt career here, I’ve run more laps at Eldora than I have anywhere in the world. To go back to Eldora riding the momentum from our Kentucky win in the Truck Series is going to be exciting. I think I’ve got as good a shot as anybody to win the race and it’s one of my favorite races of the year, so I’m really looking forward to it.”

Do you see Eldora as a race where you can gain on Johnny Sauter in the point standings?

You’ve won races at 14 different tracks on the Truck Series schedule. Do you feel like this is your best chance to add Eldora to that list?

“Definitely – I have a driver that has finished first and second in his two races there and our organization has had a good setup for Eldora. I feel like for the guys on my team this is our best chance for us to go and get a win there, but it’s a little bit of a crap shoot with all the different things that can happen — almost like a Talladega or Martinsville.”

Will you allow Christopher to have more input in the setup this week because of his dirt background?

“I will involve him a little bit more with some of the decisions on what he wants in our setup this week because he has a better idea of what he needs to be able to go fast there then I do. I think he can handle whatever situation comes about, so I ‘d rather let him have what he wants to make the truck drive the way he needs it to.”

KBM-134D: The No. 4 Toyota Tundra team will unload KBM-134D for Wednesday night’s Eldora Dirt Derby at Eldora Speedway in Rossburg, Ohio. The chassis has raced the last two events at Eldora with a best finish of fourth by Erik Jones in 2015.

Ryan “Rudy” Fugle begins his fourth season as a crew chief at KBM and sixth overall with the organization.  The New York native has guided his team to an Owner’s championship in all three of his seasons (2013, 2015 & 2016) atop the pit box at KBM, including a combined Owner’s/Driver’s Championship with Erik Jones in 2015. His drivers have combined for 19 wins, 12 poles and 39 top-five finishes across his 78 races calling the shots for the organization. Under his tutelage last season, William Byron collected a Truck Series’ rookie record seven wins while leading the No. 9 Tundra team to KBM’s fourth consecutive and fifth overall Owner’s championship.

Fugle’s NCWTS drivers have posted one top-five finish and an average finish of 14.3 across three starts at Eldora. Erik Jones’s fourth-place finish in the 2015 event was the best result among Fugle’s wheelmen at the half-mile clay oval.