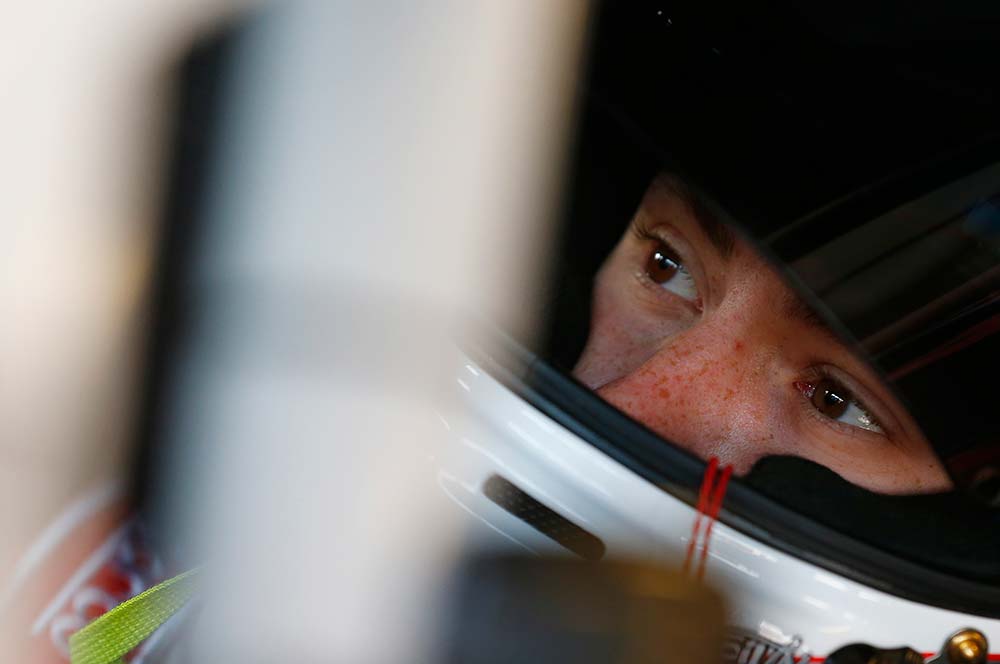 Jones has produced seven top-five and 15 top-10 finishes across 35 career NCWTS starts since making his series debut as a 16-year-old at Bristol in August of 2013. The 20 year old has finished second three times in Truck Series action, most recently at Kentucky Speedway in Sparta last July. He picked up his fourth career ARCA Racing Series victory at Michigan last year and also has one NASCAR K&N Pro Series East win (Iowa Speedway, 2014) on his resume. The Georgia native will compete full-time for Joe Gibbs Racing in the NASCAR Xfinity Series in 2018.

“Brandon has come so close to picking up his first Truck Series win the last few seasons and we know that his day is coming,” Busch said. “With running a limited schedule at KBM this year, it’ll be a big help that he’s already worked with Mike Hillman Jr., (crew chief). They know what to expect from each other and we are confident that they’ll be competing for wins in the four races they have together this year.”

“I have always wanted to be a part of Kyle Busch Motorsports, ever since they started the team and began racing at the late model level,” Jones said. “It’s amazing what they have done with Toyota over the years and how they’ve turned the organization into a championship-caliber team. I hope that I’m able to add some Camping World Truck Series wins to their legacy and to my list of accomplishments while racing with KBM this year.”

Jones will make his KBM debut behind the wheel of the No. 51 Tundra at Kansas Speedway in Kansas City May 11 and also drive for the No. 51 team at Chicagoland Speedway in Joliet, Ill., June 29, Kentucky Speedway in Sparta July 12 and Las Vegas (Nev.) Motor Speedway Sept. 14. KBM will field a fourth entry, the No. 46 Tundra, for Jones at Charlotte (N.C.) Motor Speedway May 18.

Davis posted one top-five and four top-10 finishes in seven ARCA Racing Series starts in 2017 and also recorded one top-five and two top-10 finishes across three NASCAR K&N Pro Series East races. The Dawsonville, Ga., native made multiple starts in Super Late Models last year, highlighted by a runner-up finish in the prestigious All-American 400 at Fairgrounds Speedway in Nashville, Tenn. Despite competing in only 13 of the 14 K&N Pro Series East races in 2016, the NASCAR Next alum finished eighth in the championship standings after posting one win (Old Dominion Raceway in Thornburg, Va.), one pole, five top-five and seven top-10 finishes.

“We saw Spencer have success last year at Talladega and the mile-and-a-half tracks that were a part of his part-time ARCA Series schedule and we feel that he’ll be able to continue that success running a similar schedule for us at KBM in the Truck Series this year,” Kyle Busch said. “He’s one of those kids that just loves to race and has gained experience racing several different types of vehicles in a variety of series. It’s hard to believe that he’s only 19 because he’s been competing in some of the same bigger Super Late Model races where I raced since 2012.”

“KBM is an established organization that has a history of producing winners and hopefully I can add my name to the list,” Davis said. “When you get behind the wheel of one of their Tundras it puts a lot of weight on your shoulders because you know the equipment is capable of winning and it’s up to the driver to get the job done. I’ve got five shots to get to victory lane this year and I feel like that’s enough to make it happen.”

Herbst was named the 2017 ARCA Racing Rookie of the Year after posting one win, one pole, 203 laps led, six top-five and 10 top-10 finishes for Joe Gibbs Racing. The 18 year old finished fifth in the ARCA championship standings despite missing the season-opening race at Daytona because he wasn’t old enough to compete. The Las Vegas native picked us his first ARCA win last June at Pocono Raceway in Long Pond, Pa., when he led a race-high 45 laps.  The NASAR Next product competed full-time in the NASCAR K&N Pro Series West in 2016 and finished seventh in the championship standings after recording seven top-five and 10 top-10 finishes across 14 starts. He will once again compete full-time in the ARCA Racing Series for Joe Gibbs Racing in 2018.

“I’m really excited for the opportunity to advance to the next level and run a few races in the Camping World Truck Series in a Kyle Busch Motorsports Tundra this season,” Herbst said.  “It’s pretty cool to join my fellow Las Vegas natives Noah Gragson, and of course Kyle at KBM, and I can’t wait to race in front of my hometown crowd at Las Vegas Motor Speedway in September. I’m going to do everything I can to make the most of the opportunity and hopefully be able to get to victory lane.”

“Riley did a nice job as a rookie in the ARCA Series picking up a win, running up front, and consistently finishing inside the top 10,” Busch said. “I’m excited to be giving another Las Vegas kid the opportunity to race in the Truck Series at KBM — especially knowing how special it’s going to be for him to race in front of all his friends and family at Las Vegas Motor Speedway later this year.”

Herbst will make his NASCAR Camping World Truck Series debut in the No. 51 Tundra at Gateway Motorsports Park in Madison, Ill. June 23 and drive the No. 46 Tundra at Las Vegas Sept. 14.

Announcements on sponsors for all three drivers are forthcoming.