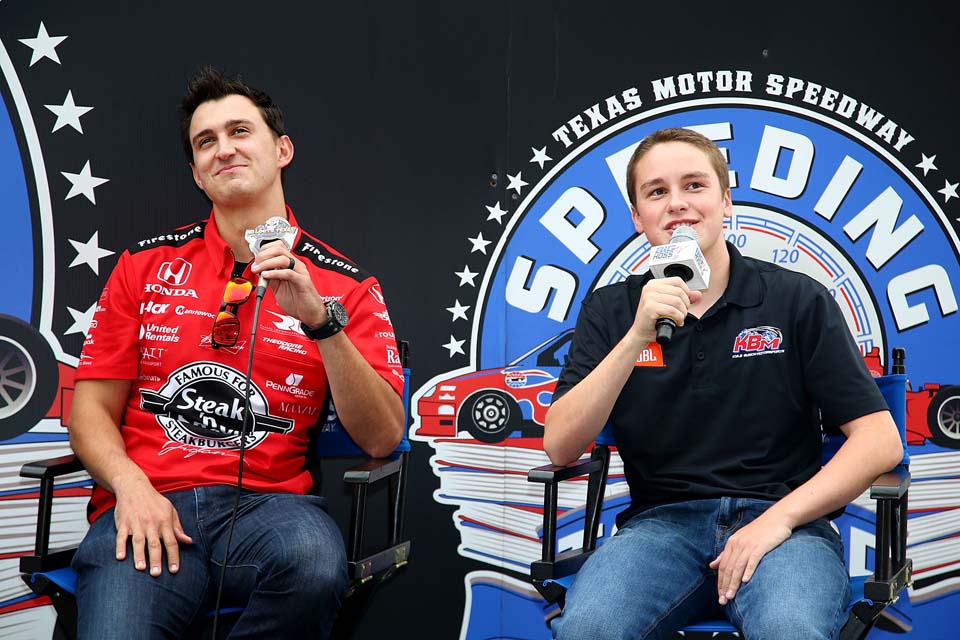 FORT WORTH, Texas (May 24, 2016) – Verizon IndyCar Series driver Graham Rahal and NASCAR Camping World Truck Series rookie Christopher Bell are still pursuing a series crown in their respective series, but the duo had an opportunity to take part in a raucous championship celebration Tuesday at Texas Motor Speedway.

Rahal and Bell served as special guests for Texas Motor Speedway’s Speeding To Read Championship Assembly held in the frontstretch grandstands that was the culmination of the year-long reading competition among nearly 6,500 students from 11 Dallas/Fort Worth-area elementary schools. Rahal and Bell took part in crowning all the champions, including Denton ISD’s E.P. Rayzor of Lantana for capturing the overall school title for the second year in a row.

Following a simulated seven-lap, NASCAR stock-car race by the Team Texas Driving Experience on the speedway’s 1.5-mile oval, the drivers arrived in grand style with Rahal wheeling a motorized bathtub and Bell driving a military-style motorcycle with sidecar down the frontstretch.

“When they had the race going on, you could hear the kids over the cars, which was cool,” Rahal said. “For them to read over one million books is pretty impressive. Congrats to everyone here at TMS and to the principals and the teachers for getting the kids to read that much. You could really feel the energy and the passion the kids brought to the speedway today. It was a really cool event.”

Rahal and Bell conducted a Q&A session, presented trophies to the winners, took part in a “Minute to Win It” game with some students and even took some selfies with some of the schools, including champion Rayzor. 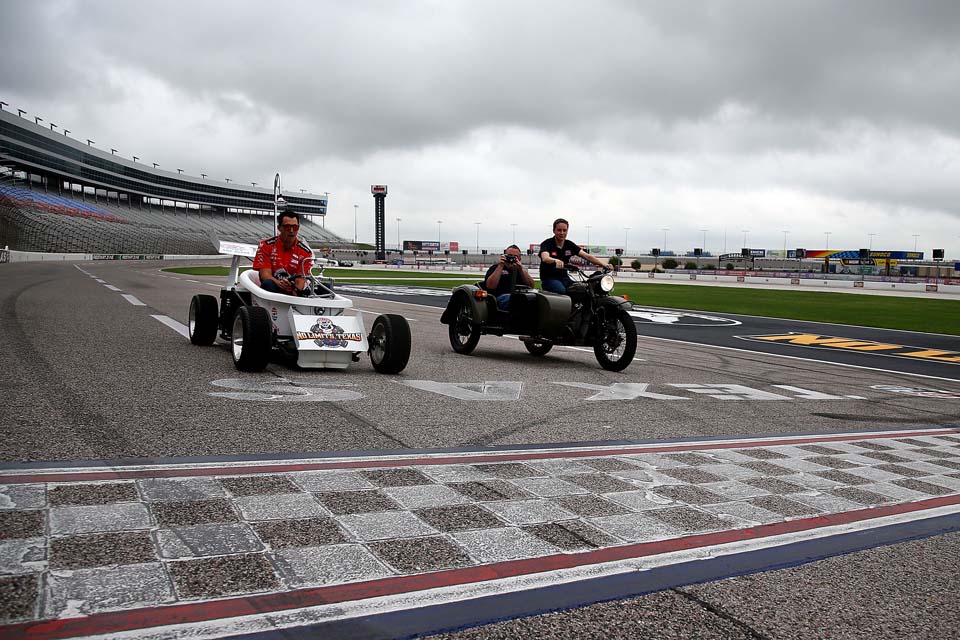 “It was cool to see how in to it the kids were,” Bell said. “It was great to be a part of. Congrats to all of the kids for reading all of those books.”

Rayzor claimed its second consecutive school championship in the year-round competition on the strength of the first perfect season in the five-year history of the speedway’s educational program. Rayzor had 100 percent of its student body meet or exceed the program’s pre-set reading goals through each of the four turns of the competition.

“Our goal for participating in Speeding to Read is to help our students love reading and to create lifelong readers,” Rayzor Elementary Principal Mary Dunlevy said. “I feel we have met this goal and we are very excited that 100% of our students have met their goal at each turn. If a person loves to read, it can take them anywhere they want in life.

“It’s been a great experience having everyone in the school working on a common goal and working together to achieve that goal. The students have had rich conversations about books that they are reading and the library is a busy place with students checking out books on a regular basis. This can be contributed to our participation in the Speeding to Read program.”

Rayzor guided the 11 schools to another program record by combining to read 1,098,074 books during the nine-month competition that began in September. Rayzor was joined in this year’s program by Samuel Beck, Sendera Ranch and O.A. Peterson of the Northwest ISD; Old Settlers and Rockbrook of the Lewisville ISD; Northbrook of the Eagle Mountain/Saginaw ISD; J.A. Hargrave of the Crowley ISD; Nathan Adams of the Dallas ISD; and Carroll Peak and Riverside Applied Learning Center of the Fort Worth ISD.

Of the 11 schools, four had 94% or better of their student bodies reach the year-long reading goals. In addition to Backstretch Division and overall champion Rayzor at 100%, Frontstretch Division champion Samuel Beck was at 98%, Old Settlers at 94.7% and Sendera Ranch at 94.5%.

All the individual and classroom champions earned trophies, prize packs and tickets to the Firestone 600 Verizon IndyCar Series race on Saturday, June 11, at Texas Motor Speedway. For winning the school title, the student body at Rayzor also earned tickets to the Firestone 600. Also, the champion principals, librarians and teachers were rewarded with a spa treatment or dinner for two at The Speedway Club. 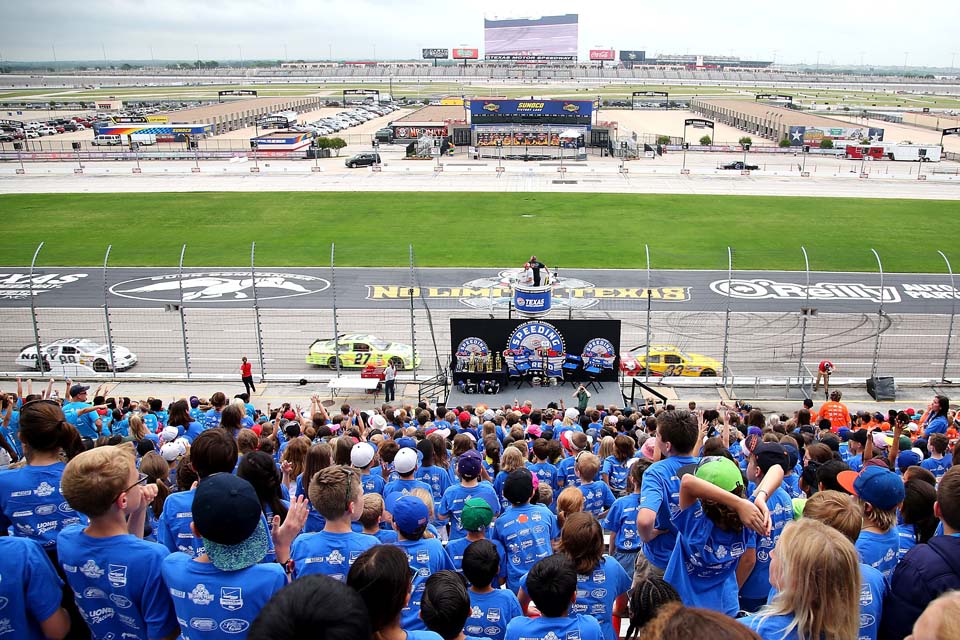 Domino’s is donating a pizza party to one of the school division champions while Woolley’s Frozen Custard will be donating a custard party for the other to celebrate their accomplishments.

Score A Goal in the Classroom donated nearly 1,200 books to Tuesday’s champions as well as the libraries of all 11 schools that participated in the program. Score A Goal in the Classroom is among the 11 Texas Motor Speedway Speeding To Read partners that consists of NASCAR, Verizon IndyCar Series, Lionel Racing, aai Trophies & Awards, Domino’s, Woolley’s Frozen Custard, Kid’s Beach Club, Speedway Children’s Charities-TMS Chapter, The Speedway Club and SMI Properties.

Rahal, who is competing in Sunday’s historic 100th running of the Indianapolis 500, and Bell will be returning to Texas Motor Speedway on June 9-11 for the Firestone 600 INDYCAR/NASCAR doubleheader.

“This is as close to home as it gets on the NASCAR schedule so it is always great to come back to Texas,” said Bell, who finished eighth in his Texas Motor Speedway debut in the NCWTS this past November. “As a race car driver, all you can ask for is multiple grooves and you have that here at Texas and that is part of what it makes it so fun. It’s a fun place to race at it and it makes it sweeter to be a little closer to home.” 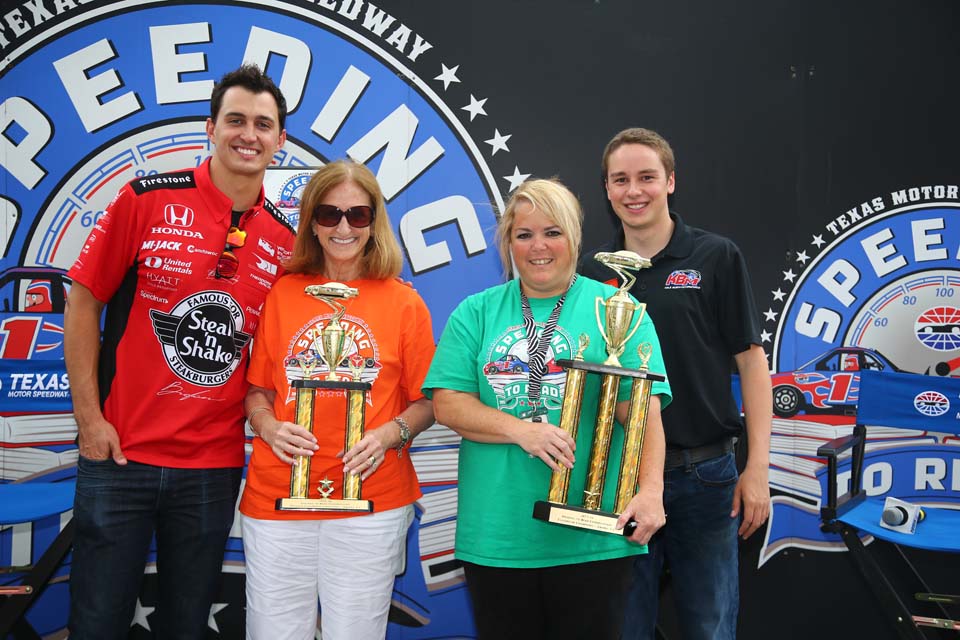 “I think (the Firestone 600) is going to be nuts,” said Rahal, whose best finish at Texas was second in 2012. “Typically this race is, but I think it is going to be a great show. I have been seeing some extremely close racing recently and I think you will see a great battle here.

“From the time we tested here (three weeks ago), we have learned a lot about the car. I think you will see an awesome show when we come back here in June. It’s always fun here and they have a great crowd here. I hope a lot of people will watch the 500 this weekend and want to come out here to Texas and be a part of our series. I am looking forward to being back here in June.”

For the full overall results or more information on the Speeding To Read program, please visit www.speedingtoread.com.

John Hunter Nemechek Closes Out the Round of 10 with a Top-Five Finish
September 17, 2021