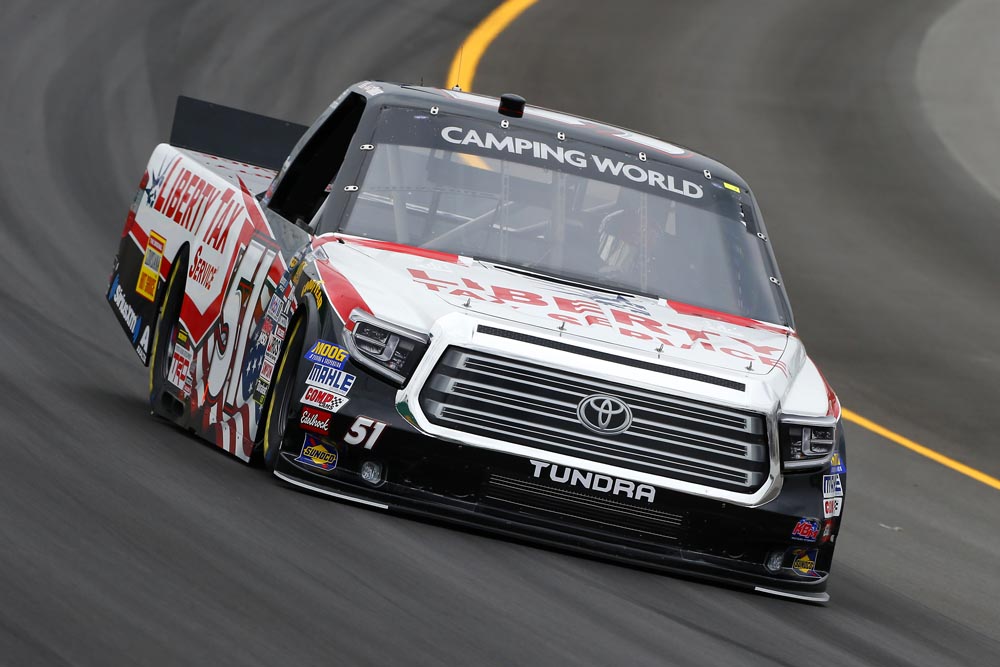 MOORESVILLE, N.C. (Nov. 1, 2017) –  Texas Motor Speedway is one of only two race tracks where the NASCAR Camping World Truck Series (NCWTS) visits twice in a season. For Myatt Snider, he is ready to head back west to the Lone Star State once again. Snider made his Texas debut earlier this season and although his race didn’t end the way he wanted, he’s excited to get on track this weekend and redeem himself.

Snider qualified his No. 51 Toyota Tundra 13th in June at Texas for his second NCWTS race of the 2017 season. The rookie was on his way to his second top 10 of the season until a late-race spin relegated him to a 16th-place finish. Now Snider is eager to take what he’s learned from his experience at Texas and apply it Friday night under the lights. The No. 51 team also plans to utilize their new crew chief, Mike Hillman Jr., who has six wins, 10 top-five and 10 top-10 finishes in the NCWTS at the 1.5-mile track. Five of Hillman’s six wins came with veteran driver Todd Bodine (2005-2007, 2009-2010). For his sixth win, he helped Jeb Burton get the first Truck Series victory of his career. That is his plan for Snider Friday night as well.

Friday’s JAG Metal’s 350 will be Snider’s seventh start for Kyle Busch Motorsports (KBM) in the NASCAR Camping World Truck Series (NCWTS) this season. The 22-year-old made his season debut at Daytona (Fla.) International Speedway. Snider started that race 13th and ultimately crossed the finish line 10th to earn his first of three top-10 finishes so far this season. At Kentucky Speedway in Sparta he started the race from the sixth position, led four laps and ultimately crossed the finish line 16th. In his fourth race of the season, he took the green flag 10th and persevered from a mid-race spin to capture his second top 10 of the season at Chicagoland Speedway in Joliet, Ill. Snider qualified ninth for the race at Las Vegas (Nev.) Motor Speedway, but his day ended early after he was clipped from behind on the first lap and his Tundra ran into the inside wall first and came to rest on the outside wall. The damage was too severe for Snider to continue and he was scored with a 28th-place finish. In his most recent start, Snider rolled off the grid ninth at Talladega (Ala.) Superspeedway and earned his career-best finish of third at the superspeedway.

After Texas, Snider can be seen behind the wheel of the No. 51 Tundra one more time this season at Homestead-Miami (Fla.) Speedway Nov. 17.

As Snider returns to Texas, he will bring back the colors of Liberty Tax Service on the hood of his No. 51 Tundra. Headquartered in Virginia Beach, Va., last year Liberty Tax Service prepared over two million individual income tax returns in more than 4,000 offices and online. Liberty Tax also supports local communities with fundraising endeavors and contributes as a national sponsor to many charitable causes.

When the engines start and the lights come on Friday night, Snider hopes he can race his No. 51 Liberty Tax Service Tundra all the way to Victory Lane and celebrate his first NCWTS win.

You raced at Texas earlier this season, what have you learned from that race and what are you looking forward to about this weekend?

“The last time I ran Texas, I found out that it’s not really the fast and narrow place that it used to be. Turn one can be really tricky, but I think it makes for good racing. We ran top 10 most of the race last time we went there, and the whole No. 51 Liberty Tax Service team has momentum going into the weekend from two good races at Talladega and Martinsville. So, I think we’ll easily continue the trend. I’m looking forward to two solid practices and hopefully qualifying up front to get our Tundra where it needs to be at the end of the race.”

You’ve found success at Texas Motor Speedway before, what are your expectations for this weekend with a new driver?

“I’m excited to head to Texas with the No. 51 team. It’s one of my favorite tracks to race on and the track that I’ve had the most wins at in the Truck Series. Myatt (Snider) and I have talked — we’ve discussed his spring race there and how he can improve this weekend. I expect to go out there and be aggressive and hopefully run upfront for 147 laps.”

KBM-033: The No. 51 Liberty Tax Service team will race KBM-033 for Friday’s race under the lights. This Tundra was raced earlier this season by Snider’s KBM teammate Harrison Burton at Dover International Raceway and Iowa Speedway.

Hillman’s History:
Two-time NASCAR Camping World Truck Series champion crew chief Mike Hillman Jr., will be calling the shots for KBM’s No. 51 Toyota Racing team. Hillman Jr., helped Toyota capture its first-ever NASCAR national series championship when he guided Todd Bodine to the Truck Series title in 2006. The duo won 14 races as a pairing from 2006 to 2011 and topped the driver’s standings in NASCAR’s third division again in 2010. Overall in his 10-plus seasons atop the pit box, the New York native’s NCWTS drivers have collected 20 wins and 18 poles.
Hillman Jr., has six wins, 10 top-five and 10 top-10 finishes in 20 starts as a crew chief in the NCWTS at Texas. Five of his six Texas wins came with Todd Bodine behind the wheel and his most recent victory in 2013 was with Jeb Burton.
Share this post
Share on FacebookShare on Facebook TweetShare on Twitter