Snider’s Ready to “Shake and Bake” at Talladega 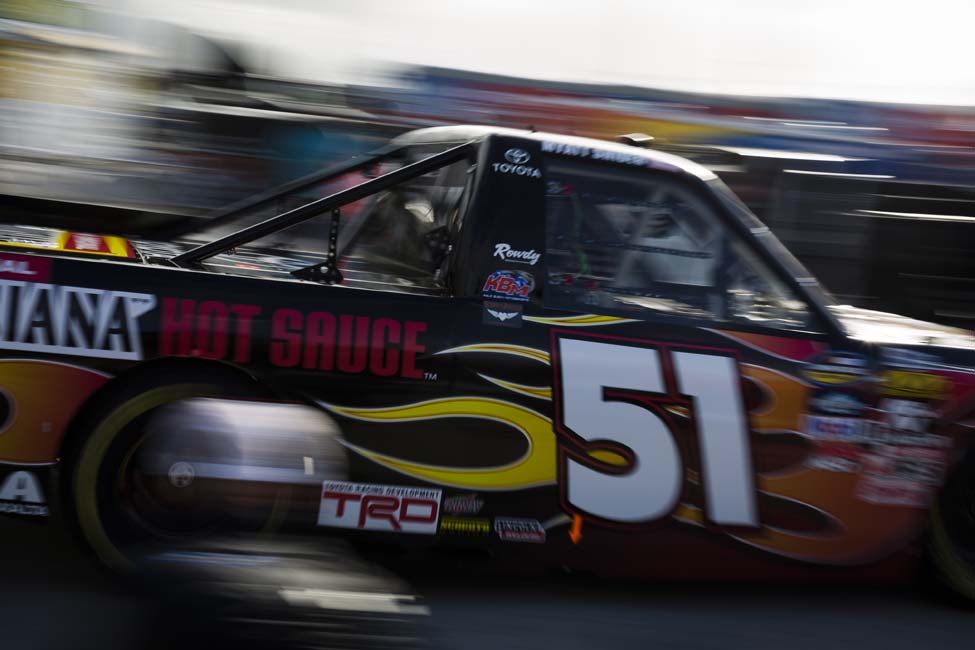 MOORESVILLE, N.C. (Oct. 10, 2017) –  There is no doubt that Talladega (Ala.) Superspeedway is one of the most famed race tracks on the NASCAR circuit. From the movie “Talladega Nights: The Ballad of Ricky Bobby” starring Will Ferrell to the Eric Church hit “Talladega,” the 2.66-mile track is recognized by more than just the average NASCAR fan.

Spectators of races at Talladega Superspeedway are sure to see fast speeds, drafting and drivers trying to avoid “The Big One.” For a rookie like Myatt Snider, who’s preparing to turn his first laps at the longest track in NASCAR, preparation is key. From studying past races at the superspeedway, to talking with his No. 51 Louisiana Hot Sauce team, Snider feels mentally and physically prepared for his weekend in Alabama.

Saturday’s Fred’s 250 will be Snider’s sixth start in the NASCAR Camping World Truck Series (NCWTS) for Kyle Busch Motorsports (KBM) in 2017. The 22-year-old made his season debut at a different superspeedway, Daytona (Fla.) International Speedway. Snider started that race 13th and ultimately crossed the finish line 10th to earn his first of two top-10 finishes so far this season. Snider’s second NCWTS race of the season came at Texas Motor Speedway in Fort Worth where he was in place to grab a top 10 until a late-race spin relegated him to a 16th-place finish. At Kentucky Speedway in Sparta he started the race from the sixth position, led four laps and ultimately crossed the finish line 16th. In his fourth race of the season, he took the green flag 10th and persevered from a mid-race spin to capture his second top 10 of the season at Chicagoland Speedway. Snider qualified ninth for his latest NCWTS race at Las Vegas (Nev.) Motor Speedway, but his day ended early after he got clipped from behind on the first lap and his Tundra caromed hard into the inside wall first and came to rest in the outside wall. The damage was too severe for Snider to continue and he was scored with a 28th-place finish.

After Talladega, fans will have two more chances to catch Snider behind the wheel of the No. 51 Tundra this season at Texas Motor Speedway Nov. 3 and Homestead-Miami (Fla.) Speedway Nov. 17.

As Snider makes his track debut Saturday afternoon, he will once again don the colors of Louisiana Hot Sauce on the hood of his No. 51 Toyota Tundra. Louisiana Hot Sauce is made in New Iberia, La. Over the years, the company has expanded, but they have stayed true to a promise made over years ago to create a perfectly balanced sauce that is “not too hot, not too mild.”

Snider is still on the hunt for his first NCWTS win and hopes his patience, preparation and persistence will help him find Victory Lane this weekend in the deep south of Alabama.

Two weeks ago, in Las Vegas, you were unfortunately unable to complete a lap in the race, how have you moved on from that going into Talladega?

“It’s a shame that Las Vegas went the way it did. I felt like Bono (Manion, crew chief) and the team had really given me a great Tundra to race with. We practiced well and drafted great in practice. So, that gives me confidence that we’ll have a similar story come time for practice and racing in Talladega.”

This will be your first time at Talladega and your second time this season on a superspeedway. You ended up with a top 10 at Daytona, are you confident you can do that again at Talladega? How have you prepared for the weekend?

“It’s hard to truly prepare for a plate track. All you can do is study old races and ask questions. The only real experience you can get is actually drafting. But I will be running the iRacing pro invitational tonight, which should be the closest thing to Talladega I can get. Regardless, I’m happy to be back in the No. 51 Louisiana Hot Sauce KBM Toyota Tundra once again.”

You have experience as a crew chief at Talladega Superspeedway, what advice do you have for Myatt (Snider), a rookie, for the weekend?

“I’ve been there when you’ve asked them to ride in the back and then at the end of the race make a push to try to win and they’ve wrecked. We’ve also ran up front and led a lot of laps and wrecked, so I don’t think there is a formula to say how to be there at the end. I think you must have a fast truck and we will have that from KBM. I think being up front, staying out of trouble, leading laps and being aggressive as far as on the offense instead of defense, will go miles in trying to win the race.”

KBM-026: The No. 51 Louisiana Hot Sauce team will race KBM-026 for Saturday’s Fred’s 250. Snider raced this Tundra to a top-10 finish in his season debut at Daytona International Speedway

Wes Ward will serve as interim crew chief for the No. 51 team this weekend at Talladega. Ward is currently in his third season at Kyle Busch Motorsports, where in addition to helping oversee the efforts of the No. 46 team’s part-time schedule this season, he serves as the shop foreman. Ward earned two Truck Series victories last season with Kyle Busch behind the wheel at Martinsville (Va.) Speedway and Chicagoland (Ill.) Speedway. The North Carolina native became a fixture in the NASCAR XFINITY Series garage beginning in the late 1990’s and over the course of 16 years called the shots for over 300 races working with notable drivers such as Dale Jarrett, Kasey Kahne, Kenny Wallace, Jason Keller and Brad Keselowski. Ward’s lone XFINITY Series win came with Kahne behind the wheel in the 2003 series finale at Homestead-Miami (Fla.) Speedway.

This will be Ward’s first race as a crew chief in the Truck Series at Talladega. His best finish across 11 XFINITY Series races atop the pit box at the Alabama track was a 12th-place finish with Jason Keller in 2004.