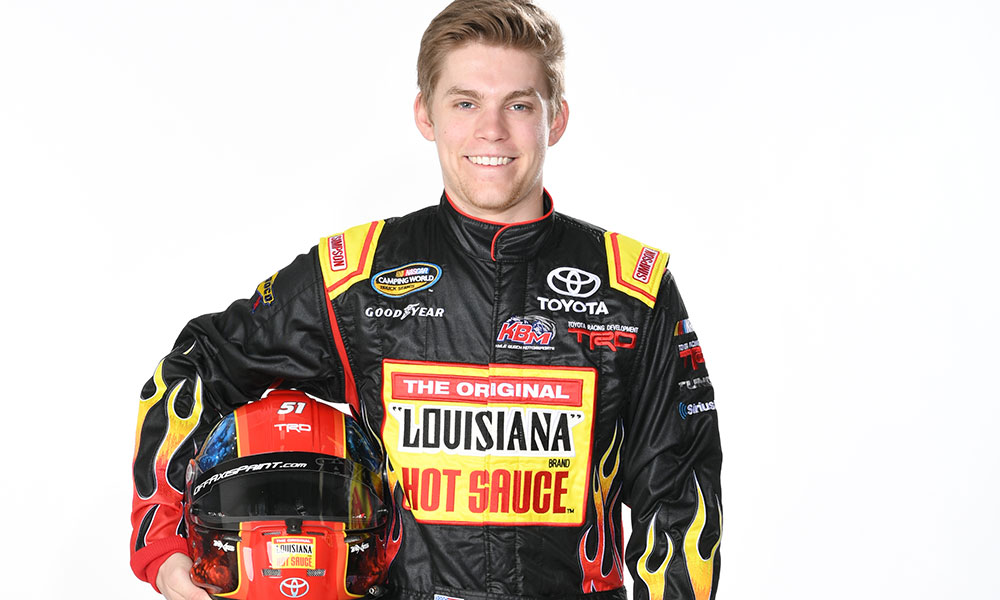 MOORESVILLE, N.C. (Feb. 21, 2017) – Myatt Snider will kick off the 2017 NASCAR Camping World Truck Series season Friday night at Daytona (Fla.) International Speedway behind the wheel of the No. 51 Louisiana Hot Sauce Toyota Tundra in the NextEra Energy Resources 250. Daytona will mark Snider’s first start for Kyle Busch Motorsports (KBM), and his first start on a superspeedway. Snider is one of four drivers who will pilot the No. 51 Toyota Tundra throughout the 2017 season. He will compete in eight races, sharing the Tundra with owner-driver Kyle Busch, Harrison Burton and Todd Gilliland.

Snider put his name on the national motorsports map in May of 2016 when he led 35 laps en route to victory in his ARCA Racing Series debut at Toledo (Ohio) Speedway. The North Carolina native collected one win, 68 laps led, three top-five and five top-10 finishes resulting in an average finish of 13.8 across nine ARCA starts last season. He made his NASCAR Camping World Truck Series debut for AM Racing at Phoenix (Ariz.) International Raceway in November where he started 19th and finished on the lead lap in the 17th spot.

When Snider hits the track, he will don the colors of his sponsor Louisiana Hot Sauce. Louisiana Hot Sauce is made in New Iberia, Louisiana. Over the years, the company has expanded, but they have stayed true to a promise made over eighty years ago to create a perfectly balanced sauce that is “not too hot, not too mild”. Friday night when the lights come on and the engines start, Snider hopes he can start his rookie season with a victory at the World Center of Racing.

Daytona will be your first race on a superspeedway, how have you prepared?
“I’ve done a lot of research. I’ve tried to watch as much video as I can and ask questions to people who have run these races before, like Kyle (Busch) and Christopher (Bell). They can really be a wealth of knowledge.”

What are your goals for Daytona? What are you looking forward to the most?
“Obviously, I want to win, but this is my first truck start at KBM so I want to keep it all in one piece. I am looking forward to just being a part of it – the whole atmosphere in general. I’ve been working to get to this position for a long time now and the day has finally come so I am excited for it.”

What do you think about the new race format?
“With three new segments and three new chances to win I think it’s going to create a lot more chances for great action. It’s going to make the racing dynamic a little bit different, but I am feeling optimistic about it.”

What are you looking forward to the most about working with Myatt this season?
“Myatt is a very bright, young driver with a huge smile every time he walks in the shop. His smile is what makes me smile. I’m looking forward to taking all the positive energy the team and Myatt has and producing positive results on the track.”

How do you feel about the new race format? Will it change your strategy during the race?
“The new race formats are going to change the way we call races and I’m looking forward to it. Every time there’s a rule change we have to change how we think about calling races. The new format will put a new twist in these races. We’ll really pay attention to fuel mileage and potentially staying out on some of the stages.”

KBM-026: The No. 51 Louisiana Hot Sauce team will race KBM-026 for Friday’s NextEra Energy Resources 250. This Tundra has four prior starts on superspeedways.

Manion has no wins in only one start as a NCWTS crew chief at Daytona.