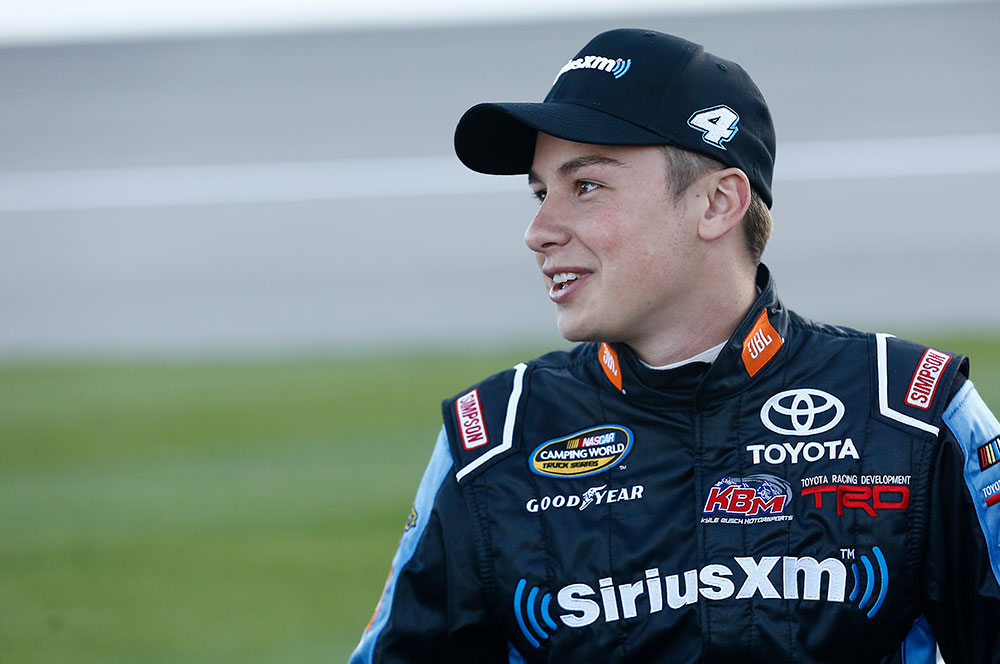 MOORESVILLE, N.C. (May 16, 2017) – Over the first four races of the 2017 NASCAR Camping World Truck Series season only one driver has finished inside the top 10 in every race and that is the driver of the No. 4 SiriusXM Tundra, Christopher Bell. The 22-year-old will look to keep that streak alive in Friday night’s North Carolina Education Lottery 200 at Charlotte (N.C.) Motor Speedway.

Despite trailing reigning Truck Series champion Johnny Sauter by two points in this year’s championship standings, one could argue that Bell has been the most impressive wheelman in NASCAR’s third division in 2017. Over the first four races on the schedule, Bell has collected the pole twice and leads all Truck Series regulars in several key statistical categories including, average finish (4.0), driver rating (122.9), laps led (238) and fastest laps run (107).

Bell, who cut his racing teeth on dirt tracks across the country, burst onto the NASCAR scene in June of 2015 with a fifth-place finish at Iowa Speedway in Newton in his Truck Series debut. Then a month later, in just his third career start he led 106 of 154 laps at famed Eldora Speedway in Rossburg, Ohio en route to his first Truck Series victory. Despite a hot start to his career, the Oklahoma native only finished inside the top 10 once in his next seven events and after 10 career starts had an average finish of 14.4.

After a staticky first 10 starts to his Truck Series career, Bell has dialed things in and his results are moving up the charts. He has cut his average finish in half, boasting an average finish of 7.2 over his last 24 Truck Series events. If those 24 races were in one full season, his average finish would be better than three of the last five Truck Series champions. (Sauter 8.0 in 2016, Matt Crafton 7.9 in 2013 and James Buescher 8.6 in 2012). Across that 24-race span, he has finished inside the top 10 21 times, with half (12) of those starts resulting in top-five finishes.

Now that he has shown a knack for delivering a stretch of ‘sirius’ly consistent finishes, the 22-year-old’s next goal is to cash in on more jackpots. His first chance to do so will come at Charlotte on Friday night in the North Carolina Education Lottery 200 and with KBM’s winningest Tundra, KBM-21, underneath him, you have to like his odds.

How does Charlotte compare to the other mile-and-a-half tracks on the schedule?

“One thing about Charlotte is that the arc is completely different than most of the mile-and-a-half tracks for some reason. You can follow the wall a lot closer — especially getting into three — than you can at the other mile-and-a-halves. Charlotte is also fairly rough, so that makes it different than Kansas, Kentucky and now Texas — all of the places that have fresher surfaces. I feel like my No. 4 SiriusXM team is always strong no matter where we go, but the mile-and-a-half tracks seem to be our strong suit, so hopefully we can get another win under our belts on Friday night.”

You’ve finished inside the top 10 in 18 or your last 20 races, what has been the key to delivering consistent finishes?

“The key to having consistent finishes is that I’m able to have fast Toyota Tundras. Being at Kyle Busch Motorsports they have excellent equipment and now that I’ve taken a step back — stopped trying so hard and stopped making mistakes – I’ve been able to finish the races and my trucks have been fast enough to be able to finish in the top 10.”

With all the traveling you do for racing, are you looking forward to racing the next two weekends in Charlotte?

“Charlotte is one of my favorite race tracks on the schedule and it makes it even better that it’s a home race. But for me, I’m going to be leaving early Saturday morning heading to Canada to race in the NASCAR Pinty’s Series race at Canadian Tire Motorsport Park, so even though I’m racing at home in the Truck Series I’m still going to be traveling. I wouldn’t want it any other way though — I love my job and I love driving race cars.”

Rudy Fugle, crew chief of the No. 4 NCWTS SiriusXM Tundra:

How much of a benefit will it be to have tested at Charlotte Motor Speedway recently?

“Having that test a few weeks ago at Charlotte will allow us to unload a lot closer to what we are going to need for this weekend than we would have otherwise. The difference is that it is going to be a lot hotter this week than it was when we tested and Charlotte is one of the most temperamental race tracks that we go to. We’ve had a lot of speed on the two mile-and-a-half tracks we’ve raced at this season and I’m confident that we’ll have another fast SiriusXM Tundra on Friday night. A lot of the people at KBM that might not normally be at the track will be out there on Friday night, so you definitely want to have a strong performance for them.”

KBM-21: The No. 4 SiriusXM Racing team will unload KBM-21 for Friday’s North Carolina Education Lottery 200 at Charlotte (N.C.) Motor Speedway. With nine trips to victory lane, “Blackjack” is the winningest Tundra in KBM’s fleet. Included in the nine wins was Kyle Busch’s dominant win at Charlotte in 2014, where he led 130 of 134 laps and registered a perfect driver rating en route to the victory.

Ryan “Rudy” Fugle begins his fourth season as a crew chief at KBM and sixth overall with the organization.  The New York native has guided his team to an Owner’s championship in all three of his seasons (2013, 2015 & 2016) atop the pit box at KBM, including a combined Owner’s/Driver’s Championship with Erik Jones in 2015. His drivers have combined for 17 wins, 11 poles and 36 top-five finishes across his 72 races calling the shots for the organization. Under his tutelage last season, William Byron collected a Truck Series’ rookie record seven wins while leading the No. 9 Tundra team to KBM’s fourth consecutive and fifth overall Owner’s championship.

Fugle’s NCWTS drivers have posted one win, two top-five and three top-10 finishes resulting in an average finish of 6.5 across four starts at Charlotte. Kyle Busch led 80 laps en route to victory with Fugle calling the shots in the 2013 event.