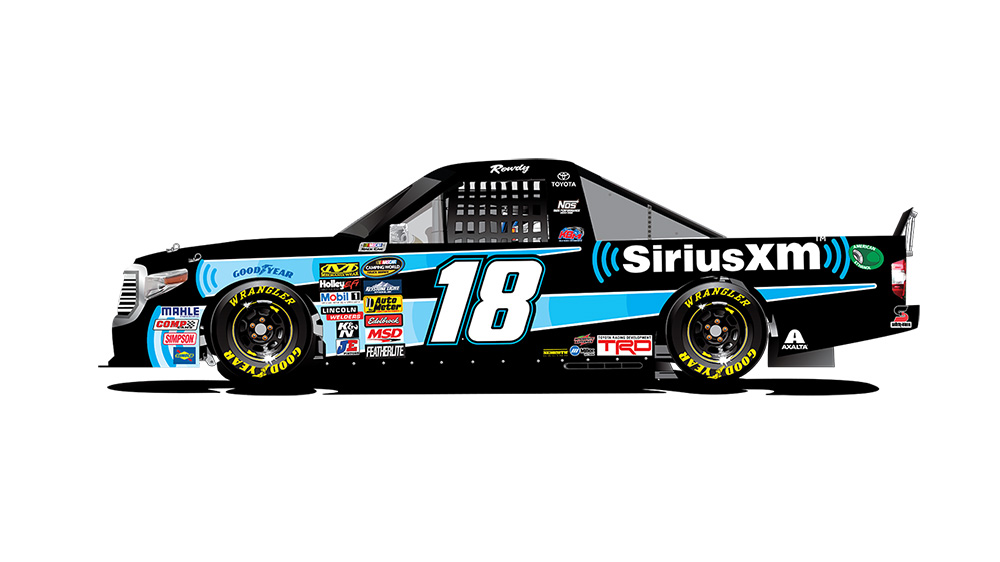 When it comes to the Truck Series, Busch has posted some serious statistics since making his debut as a 16-year-old at Lucas Oil Raceway Park in Indianapolis, Ind., Aug. 3, 2001. After posting two top-10 finishes in six starts that season, NASCAR raised the minimum age requirement for its top-three series leaving Busch ineligible to compete in the Truck Series until his 18th birthday in May of 2003. He returned in 2004 for one start, and then in his first start of the 2005 season, the Las Vegas native collected his first career Truck Series victory driving for Billy Ballew Motorsports at Charlotte.

Fast forward to 2016 and ‘Rowdy’ has built an impressive resume across his 130 career Truck Series starts. Entering Friday’s race at Charlotte, Busch ranks first all-time among NCWTS drivers in driver rating (121.3) and average finish (6.9), while his 45 career NCWTS wins rank second to Ron Hornaday Jr. (51). The 31-year-old driver has visited victory lane in 34.6 percent (45/130) of his NCWTS starts and has finished first or second in 52.7 percent (68/130) of the events he has entered, including a victory at Martinsville (Va.) Speedway in his lone start this season.

Busch’s six wins at Charlotte are a track-best for a Truck Series driver and more than he has registered at any other track in NASCAR’s third division. He’s undefeated at the 1.5-mile quad-oval in his Tundra since KBM’s inception in 2010, winning the last four times that he’s entered the race (2010, 2011, 2013 and 2014). He also tops the Truck Series in laps led at Charlotte with 545, has the most top fives (seven) and is tied with Mike Skinner for the most poles (three).

With a new sponsor onboard his No. 18 Tundra Friday night, Busch will look to add to the ‘Sirius’ statistics he’s already compiled in his Truck Series career and scratch-off his lucky seventh victory in the N.C. Education Lottery 200.

Kyle Busch, driver of the No. 18 SiriusXM Tundra:

Are you looking forward to having SiriusXM on your Tundra this week at Charlotte?

“It’s always great to welcome in a new partner, especially when it’s a product that I use every day like I do with SiriusXM while driving my Toyota vehicles. They have so many great channels and depending on my mood you can find me listening to a variety of stations — the ‘80s on 8, the Pulse, Octane, Pearl Jam Radio, Classic Rewind, Y2K Country and the NASCAR Channel are among my favorites. The great part about our partnership with SiriusXM is not only are they on my Tundra for a couple races, but they will also be onboard with Christopher Bell for a handful of races supporting one of our up-and-coming drivers. I’ve been very successful at Charlotte in the Truck Series — especially since we started KBM in 2010 — so hopefully we can go out and get another win in front of all our employees and their families and start the partnership with SiriusXM off right. Then, we can celebrate by making our customary trip to visit Claire (B. Lang) on the NASCAR Channel and catch up with the fans after the win.”

Wes Ward, crew chief of the No. 18 SiriusXM Tundra:

Are you looking forward to getting back on top of the pit box and working with Kyle this week at Charlotte?

“It was great for everyone at KBM to get a win with Kyle at Martinsville — it took the help of the other three full-time teams and everyone in the chassis shop and the fab shop to be able to run a fourth truck and make it competitive. We’re bringing another brand new Tundra to Charlotte, so everyone in the building has been working hard the last few weeks to help us get it ready since we only have a couple of full-time guys on our team. The weather looks like it might be a factor, so hopefully we get the three practice sessions in Thursday to get it dialed in. Kyle’s won a lot of Truck races at Charlotte, so we’re going to do everything we can to go out there and put him in position to bring home another trophy.”

Veteran crew chief Wes Ward is currently in his second season at Kyle Busch Motorsports, where in addition to overseeing the efforts of the No. 18 team’s part-time schedule this season, he serves as the shop foreman. Ward picked up his first Truck Series victory with Kyle Busch behind the wheel at Martinsville (Va.) Speedway earlier this season. The North Carolina native became a fixture in the NASCAR XFINITY Series garage beginning in the late 1990’s and over the course of 16 years called the shots for over 300 races working with notable drivers such as Dale Jarrett, Kasey Kahne, Kenny Wallace, Jason Keller and Brad Keselowski. Ward’s lone XFINITY Series win came with Kahne behind the wheel in the 2003 series finale at Homestead-Miami (Fla.) Speedway.

Kasey Kahne’s sixth-place finish in the 2003 XFINITY Series races was Ward’s best result across 13 races atop the pit box at Charlotte.