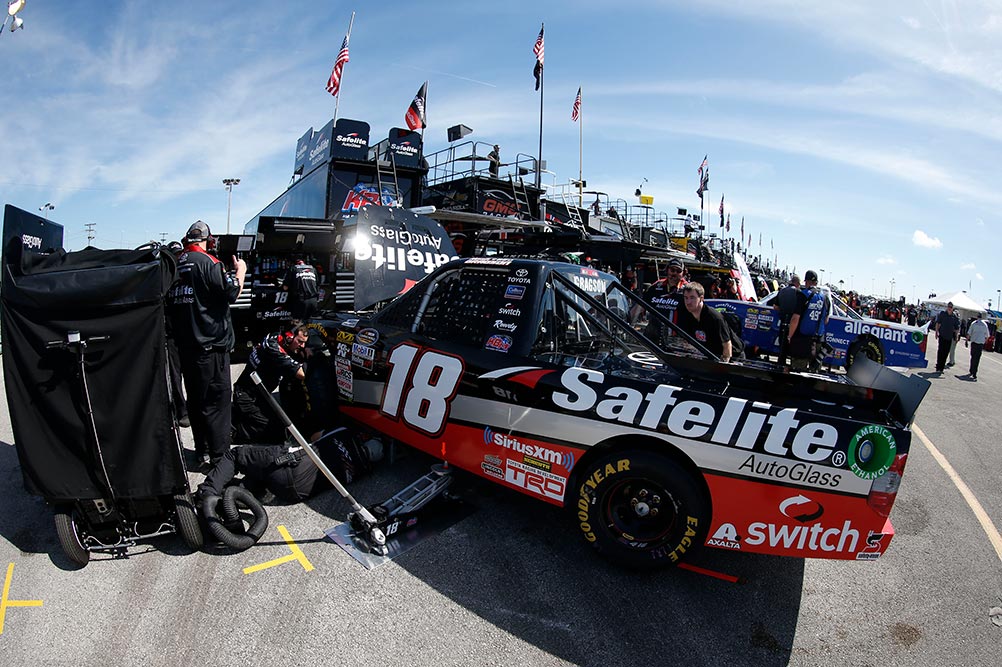 • Noah Gragson and the No. 18 Safelite AutoGlass team head to Atlanta Motor Speedway for stop two on the 2018 NASCAR Camping World Truck Series schedule. In last year’s race at Atlanta, the rookie driver overcame an early spin to post a 14th-place finish in his first mile-and-a-half start for Kyle Busch Motorsports (KBM).

• Gragson’s crew chief, Rudy Fugle, called the shots for Christopher Bell’s historic win in the Truck Series event at Atlanta last year. Bell became to the first driver under NASCAR’s new format to sweep all three stages of a race after leading 99 of 130 laps en route to victory from the pole. Gragson will be driving the same Tundra, KBM-38, that Bell piloted in last year’s victory at the 1.54-mile track. Overall in six career starts “38 Special” has collected four wins, three poles and an average finish of 1.7.

• The 2018 Truck Series season opener at Daytona (Fla.) International Speedway was unkind to Gragson and the No. 18 team. After getting caught up in two separate incidents, the Safelite Tundra headed to the garage after completing just 79 of the 100 laps and was relegated to a 23rd-place finish.

• Safelite AutoGlass, the nation’s largest provider of vehicle glass repair and replacement services, will adorn the hood of Gragson’s No. 18 Tundra for all 23 events on the NCWTS schedule in 2018.

How is your confidence on mile-and-a-half tracks?

“I have a lot of confidence going into Atlanta this year driving the Safelite AutoGlass/Switch Tundra. Last year, in 2017, I felt like I ended pretty strong on the mile-and-a-half tracks — got a couple stage wins and led a few laps at Las Vegas and Texas. I really feel comfortable heading to Atlanta and working with Rudy Fugle. Rudy and Christopher Bell last year swept all three stages and won the race. So, I’m excited to get to Atlanta and get back to mile-and-a-half racing.”

How does Atlanta compare to the other mile-and-a-half tracks on the Truck Series schedule?

“Atlanta is a different beast for mile-and-a-half racing – it’s a little bit like a short track because it is so worn out, it’s very line sensitive and you can move around a lot too. I’m really excited to be going there this year since they didn’t repave it. The tires wear out pretty bad and you’re always slipping and sliding, chasing on the steering wheel and modulating on the throttle. It’s a lot of fun from the driver’s seat. I know with the team behind me at Kyle Busch Motorsports and Safelite AutoGlass as a sponsor, we are going to be pretty good.”

Noah Gragson Career Highlights
• In 26 career NCWTS starts has collected one win, three poles, 188 laps led, four top-five and 13 top-10 finishes
• After finishing 23rd at Daytona, ranks 24th in the 2018 NCWTS driver point standings
• Gragson opened his 2018 season with a seventh-place finish in the ARCA Racing Series season opener at Daytona. After starting in the 21st position, he raced inside the top five for most of the event before coming home in the seventh spot.
• The Las Vegas native has collected four NASCAR K&N Pro Series West victories across 27 career starts and two NASCAR K&N Pro Series East victories across 15 career starts.
No. 18 Tundra – Atlanta Motor Speedway Advance Page Two

Noah Gragson’s No. 18 Safelite AutoGlass Tundra:
KBM-038: The No. 18 Safelite AutoGlass team will unload KBM-038, for Saturday’s Active Pest Control 200 at Atlanta Motor Speedway. The Tundra nicknamed “38 Special” has won four times in six career starts, including last year at Atlanta when Christopher Bell became to the first driver under NASCAR’s new format to sweep all three stages of a race after leading 99 of 130 laps en route to victory from the pole.