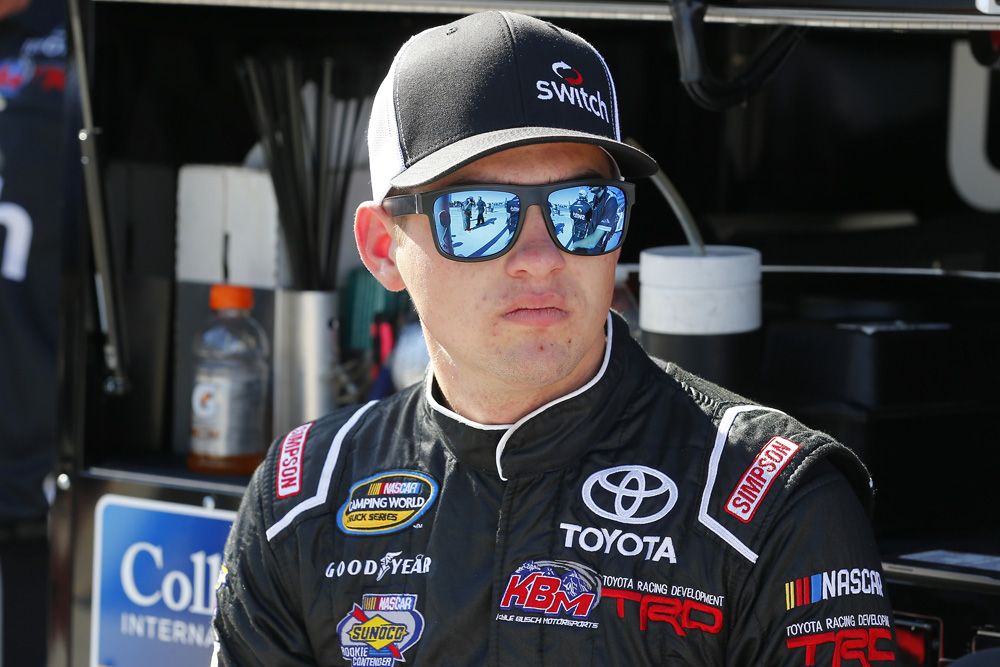 MOORESVILLE, N.C. (Jan. 12, 2018) – Kyle Busch Motorsports (KBM) announced today that Noah Gragson will return to the No. 18 Tundra for the 2018 NASCAR Camping World Truck Series (NCWTS) season with primary sponsorship for all 23 races from Safelite AutoGlass®. The nation’s largest provider of vehicle glass repair and replacement services will also serve as an associate sponsor on Harrison Burton’s No. 51 Tundra for his nine races at KBM this season.

The NASCAR Next alum cut his racing teeth on the same grounds as KBM owner Kyle Busch, getting his start at the age of 13 in the Bandoleros division at the Bullring – a 0.375-mile paved oval at Las Vegas (Nev.) Motor Speedway. After finding success in the Bandoleros, Gragson moved up to the Legends division in 2014 where he won the Young Lion Road Course championship and also began racing in the Super Late Model division at the Nevada track.

Gragson graduated to the K&N Pro Series West as a 16-year-old in 2015 and visited victory lane at Tucson (Ariz.) Speedway in just his third start. He went on to earn Rookie of the Year honors after producing two wins, one pole, seven top-five and 11 top-10 finishes in 13 starts, while finishing second in the championship standings. In 2016, he collected a combined four wins, 12 top-five and 19 top-10 finishes across 27 starts, while finishing in the top-five in the championship standings of both the NASCAR K&N Pro Series East and Pro Series West divisions.

Burton, the son of former NASCAR Cup Series driver Jeff Burton, made his Truck Series debut with KBM at Martinsville in October of 2016 and enters 2018 with seven NCWTS starts under his belt. In six NCWTS starts in 2017, he recorded an average finish of 12.3 and earned a career-best fourth-place finish at Martinsville last October in his final start of the season. The 17-year-old also collected five victories en route to the NASCAR K&N Pro Series East championship last year.

“We’re honored that Safelite AutoGlass has chosen to partner with KBM for the 2018 season and we look forward to hosting all of their employees and customers who come out to the track in bunches to support the program each and every race,” said Kyle Busch. “Both Noah and Harrison are talented on the track and have great personalities off the track, so they will be great representatives for Safelite.

Noah showed continuous improvement in 2017 winning a couple of poles in the first half of the season, and in the second half of the season putting whole races together. He was able to showcase his potential late in the year winning in the Super Late Model at Winchester and followed that up with a Truck Series victory at Martinsville a few weeks later. His progress was similar to Christopher’s (Bell) at the end of 2016, and we’re confident now that Noah has a year of experience in the trucks under his belt, he will be able to win more races and compete for a championship this year. Harrison also made great strides during his six-race schedule in 2017 and we look forward to being a part of his continued development as he returns for an expanded part-time schedule at KBM in 2018.”

“This year is already off to a great start knowing that I’ll be back at Kyle Busch Motorsports to compete for a Truck Series championship in 2018 with Safelite as the primary sponsor on my No. 18 Tundra,” Gragson said. “Having Kyle as a mentor and the technology that Toyota and TRD have in place for young drivers allowed me to learn a lot in my first full-time season in trucks, and I know that I’m better prepared to start 2018 off strong. I was able to get my first taste of victory late last year and it was special. This year I plan on climbing more fences and celebrating more wins with everyone at Safelite.”

“Our associates have a passion for NASCAR and are huge fans of our partnership with Toyota, and the developmental driver program,” Garth Beck, Safelite AutoGlass vice president of retail field operations, West said. “We look forward to this year’s season and working with KBM. It’s going to be a great opportunity for continued learning with a lot of excitement along the way.”

Dan Loyal, Safelite AutoGlass vice president of retail field operations, East agrees. “This year marks our third as a sponsor, and we work very hard to maximize the tremendous benefits of our partnership. There’s no doubt our brand nicely aligns with NASCAR, and the complexity of racing, along with the commitment to the sport is what makes our partnership with both Toyota and KBM so rewarding.”

With more than 7,800 MobileGlassShops™ and stores in all 50 states, Safelite AutoGlass®- is the nation’s largest provider of vehicle glass repair and replacement services. Last year 6 million customers chose Safelite AutoGlass for its 24/7 national contact centers, advanced online scheduling, superior repair and replacement systems, and the industry’s only nationwide lifetime guarantee.

Safelite AutoGlass is a member of the Safelite® Group family of brands, which together, make a difference in the lives of 10 million customers annually. This leading service organization, founded in 1947, is reaching record-growth thanks to its People Powered, Customer Driven strategy. The Columbus, Ohio-based company employs nearly 14,000 people across the United States.