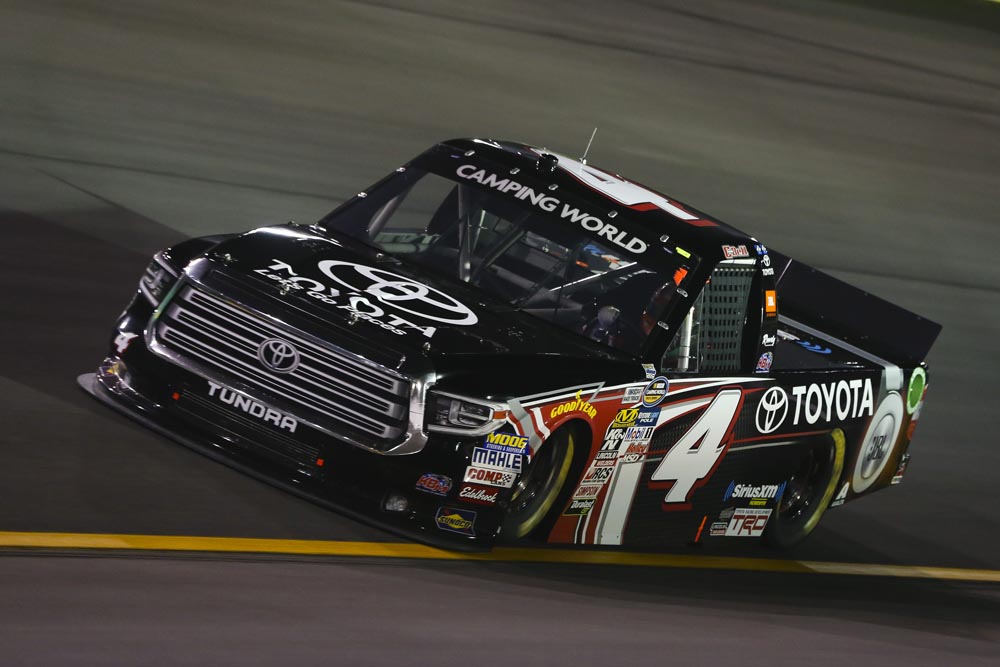 MOORESVILLE, N.C. (Nov. 7, 2017) – Christopher Bell put up solid numbers last year in his first full-time season in the NASCAR Camping World Truck Series. Despite finishing third in the 2016 championship standings, Bell felt that his season was lackluster and aimed to run up front and win more races in 2017.

The Oklahoma native has done just that and if you ask him about the strides he has taken, he’ll tell you that a lot of the credit goes to his crew chief, Ryan “Rudy” Fugle. Fugle is in his fourth season as a crew chief at Kyle Busch Motorsports (KBM) and sixth overall with the organization. The New York native has guided his team to an Owner’s championship in all three of his seasons (2013, 2015 and 2016) atop the pit box at KBM, including a combined Owner’s/Driver’s Championship with Erik Jones in 2015.

Entering Friday night’s Lucas Oil 150 at Phoenix (Ariz.) International Raceway, Fugle’s drivers have combined for 21 wins, 13 poles, 2,920 laps led, 47 top-five and 70 top-10 finishes across his 89 races calling the shots at KBM. He led Jones to three wins en route to the Driver’s championship in 2015 and last season guided William Byron to a NCWTS rookie-record seven wins. Last year at Phoenix, Byron was an engine failure away from delivering back-to-back Driver’s championships for Fugle, but was still able to earn KBM its fourth consecutive and fifth overall Owner’s championship when he rebounded from the heartbreak to win the series finale at Homestead-Miami (Fla.) Speedway.

With Byron graduating to a full-time XFINITY Series ride this season, Fugle was paired with Bell and the duo has the No. 4 Toyota team in contention for another combined championship. In addition to pacing the standings for the last 10 races, the 22-year-old driver leads the Truck Series in nearly every major statistical category this season, including wins (five), poles (four), top-five finishes (14), top-10 finishes (19), driver rating (117.9), average finish (5.8), average running position (6.1), laps led (775) and fastest laps run (368).

Bell stands 55 points above the cutoff line for earning one of the three remaining spots for the championship race and if he can earn just six points in Friday night’s 150-lap event, will advance to Homestead-Miami. He finished seventh in his debut at the one-mile track last season. Fugle’s statistics as a crew chief at Phoenix are rather impressive. In his three races calling the shots in the “Valley of the Sun,” his drivers have led 67.1 percent (302) of the 576 total laps. In 2013, Jones became the youngest winner in Truck Series history at the time, when he led a race-high 84 laps en route to victory as a 17-year-old. Last season the 19-year-old Byron led a race-high 112 laps and was out front with 12 laps remaining when his engine expired.

Both Jones and Byron earned promotions to the NASCAR Xfinity Series after learning from Fugle and it already has been announced that Bell will follow in their footsteps. Before he moves on to a full-time gig with Joe Gibbs Racing next season, the talented wheelman hopes to be the next of Rudy’s tutees to hang a championship banner from the rafters at KBM.

What is your outlook heading into Phoenix Friday night?

“I’m really excited for Phoenix — it’s a place that Rudy (Fugle, crew chief) has had a ton of success at and that gives me a lot of confidence. I’ve noticed that everywhere William (Byron) won, or had strong runs at last year, that I’ve had a ton of confidence going into those places. The success has seemed to carry over — I think the majority of the tracks I’ve won at this year are the same ones that William won at last year. William was well on his way to another win last year at Phoenix before he had issues, so I know that Rudy and all the guys on this No. 4 team are going to bring me a fast Toyota Tundra for Friday night.”

How are you able to have so much success with different drivers in your Tundra every year?

“It’s not easy, but the answer is just the people. Best race team, best owner, best manufacturer and great sponsors. Every one of the drivers have been special, including Christopher. They’re all a little bit different, but they’re all special. And then this race team is just really good at making whatever driver we have feel like they’re the driver of our team, and they do a great job of learning what their different niches are and making them comfortable. I’m proud to be the leader of this team.”

KBM-28: The No. 4 Toyota Tundra team will unload KBM-28 for Friday night’s Lucas Oil 150 at Phoenix (Ariz.) International Raceway. It is the same Tundra that Bell led 54 laps with en route to victory at Kentucky Speedway in Sparta earlier this year.

Ryan “Rudy” Fugle begins his fourth season as a crew chief at KBM and sixth overall with the organization.  The New York native has guided his team to an Owner’s championship in all three of his seasons (2013, 2015 & 2016) atop the pit box at KBM, including a combined Owner’s/Driver’s Championship with Erik Jones in 2015. His drivers have combined for 21 wins, 13 poles and 47 top-five finishes across his 89 races calling the shots for the organization. Under his tutelage last season, William Byron collected a Truck Series’ rookie record seven wins while leading the No. 9 Tundra team to KBM’s fourth consecutive and fifth overall Owner’s championship.

Fugle’s NCWTS drivers have posted one win, two poles, 302 laps led, one top-five and two top-10 finishes resulting in an average finish of 16.8 across four starts at Phoenix. Fugle won the 2013 event with Erik Jones. Last year he led 112 of the 115 laps with William Byron, but was relegated to a 27th-place finish due to an engine failure that occurred while Byron was leading with 12 laps remaining.