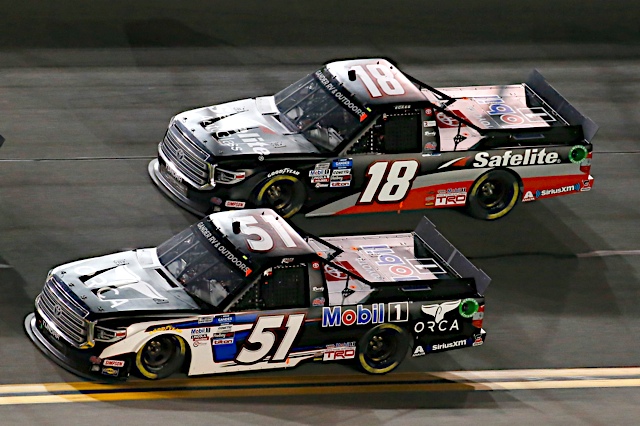 Riley Herbst and the No. 51 Orca Coolers/Mobil 1 team won the third pole in a row for Kyle Busch Motorsports at Daytona (Fla.) International Speedway. The young driver posted the second and 10th-fastest laps in two practices on Thursday. Friday afternoon, Herbst earned the pole for his first NASCAR Gander RV & Outdoors Truck Series start at the 2.5-mile oval in one round of single-vehicle qualifying.

Herbst took control on the start and led every lap of the first stage, with teammate Christian Eckes right on his bumper. During the second stage, the young driver finished fifth, and in the chaos of the final stage was caught up in a wreck, but was able to fight back to a 12th-place finish.

Riley Herbst, driver of the No. 51 Orca Coolers/Mobil 1 Tundra for Kyle Busch Motorsports:

“We had a really good Mobil 1 Toyota Tundra. We led for the first stage, won the first stage, finished fifth in the second stage. We could go really wherever we wanted. We made a late-race charge and almost cleared for the lead and we got hooked in the left rear by inches. We came in and put four tires on it and drove all the way back up to the front again and we just got stalled out. Overall, it was a really fast Toyota Tundra prepared by KBM and it was really fun.”

Raphael Lessard, driver of the No. 4 Toyota Tundra, finished 20th

Christian Eckes, driver of the No. 18 Toyota Tundra, finished 22nd

The No. 51 Toyota Tundra is ranked third in NASCAR Gander RV & Outdoors Truck Series owner standings, 12 points behind the leader and with one playoff point.