Riley Herbst Earns Fourth Top-3 in a Row for No. 51 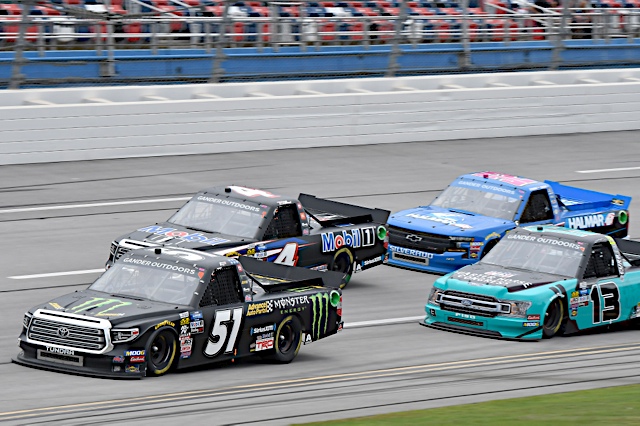 At Talladega Superspeedway on Saturday, Riley Herbst earned his first career NASCAR Gander Outdoors Truck Series top-five finish in just his seventh start, and the fourth top-three finish in a row for the No. 51 Kyle Busch Motorsports Tundra. Since Bristol in August, four different drivers have earned second or third place finishes in the No. 51. On Friday, Herbst was 15th-fastest and fourth-fastest in two Gander Trucks practice sessions. On Saturday morning in one round of single vehicle qualifying, the No. 51 Monster Energy/Advance Auto Parts team earned the seventh starting spot.

In his first start at Talladega in the NASCAR Gander Outdoors Truck Series, Herbst fell back momentarily as he got used to pack racing in the Truck Series. Once he got the hang of it, he was quiet on the radio for most of the event, continuing to run near the front of the field. In the closing laps, while battling for the lead, the No. 51 was forced below the “out-of-bounds” yellow line by the No. 13 who was eventually stripped of the win. Herbst was able to bring the No. 51 Monster Energy/Advance Auto Parts machine home in third.

Could you have done anything diffrent when Johnny Sauter forced you below the yellow line?

“Yeah, I could have absolutely stayed in the throttle and wrecked the whole field. I didn’t think that was necessary though. Tony Hirschman (spotter) put me in a good spot. He gave me a huge run off of (Turn) 4 and I faked (Johnny) Sauter to the high side and he bought it. I went to the bottom and he drove me all the way to the grass. I’m glad NASCAR made the right call there. I’m bummed that he did drive me in the grass because I feel like we could’ve ended up in victory lane for sure. All in all, it was a good day in the 51 Tundra. I’m happy with the result.”

Todd Gilliland, driver of the No. 4 Toyota Tundra, finished second

The No. 51 team leaves the 20th race of the season ranked third in the NASCAR Gander Outdoors Truck Series Owner’s Playoff Standings. The No. 51 has earned six wins, 13 top-five finishes and 15 top-10 finishes in 2019, recording an average starting position of 8.4 and an average finish of 6.4.

Christian Eckes is scheduled to pilot the No. 51 Tundra at Martinsville Speedway when the Gander Trucks Series returns on Saturday, Oct. 26. Live coverage of the event begins at 1:30 p.m. EST on FS1.