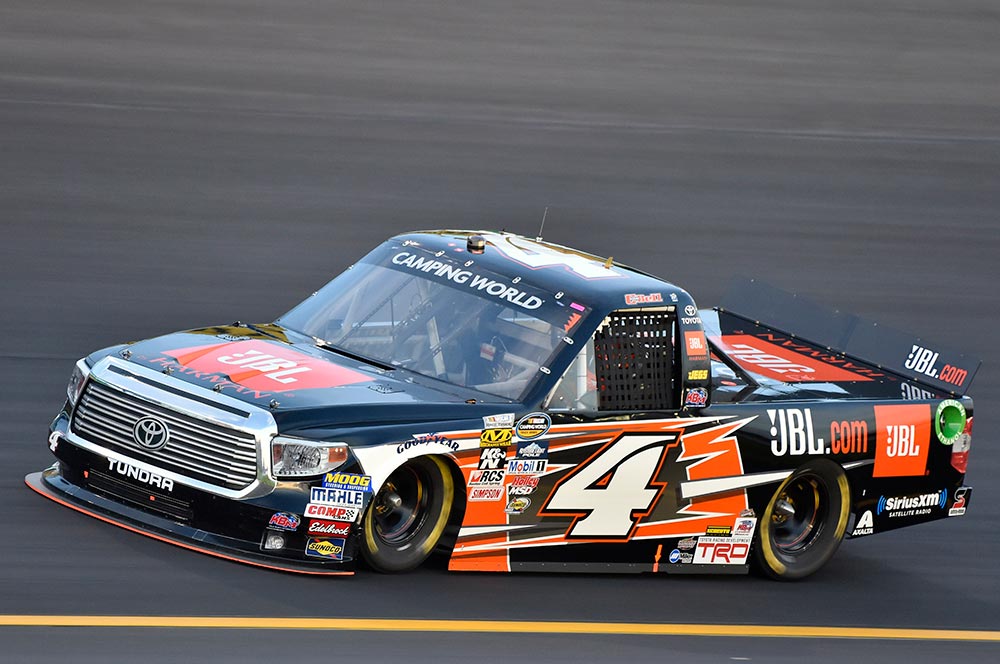 MOORESVILLE, N.C. (Aug. 15, 2016) – As an open-wheel dirt stalwart who’s known for riding high up on the cushion, Christopher Bell has been looking forward to his first start on the high banks of Bristol (Tenn.) Motor Speedway. Bell will be making the 20th start of his NASCAR Camping World Series career and the 13th of the 2016 season driving the No. 4 JBL/SiriusXM Tundra at the “World’s Fastest Half-Mile” on Wednesday night.

While it will be his first time competing in a race at the Tennessee track, it won’t be his first time making laps at “The Last Great Colosseum.” Bell, along with Kyle Busch Motorsports (KBM) teammates William Byron and Cody Coughlin, took part in a rookie test at Bristol in the days following the NASCAR Sprint Cup Series race there in April. Over the course of the two-day test, Bell was able to make over 300 laps to prepare for this week’s race.

Bell has excelled at high-banked race tracks across the various series he has competed in since transitioning his focus to pavement racing late in 2014. Last September, Bell led all 100 laps of the Winchester 100 ARCA/CRA Super Series Late Model event at Winchester (Ind.) Speedway. The Oklahoma native returned a month later for the prestigious Winchester 400 and led a race-high 204 laps, but with 50 laps to go made contact with the outside wall while dueling for the lead with eventual winner Erik Jones and was unable to continue.

The 21-year-old driver made his ARCA Racing Series debut with Venturini Motorsports on the high banks of Salem (Ind.) Speedway this April. He qualified second and went on to lead a race-high 91 laps, including the final 44 en route to victory. In the Truck Series, Bell had a strong showing at Dover (Del.) International Speedway, the circuit’s other concrete high-banked track. The talented youngster came from his ninth starting position to earn a third-place finish at the “Monster Mile.”

Coming into this week’s 200-lap event at “The World’s Fastest Half-Mile,” the two hottest drivers in the Truck Series drive a Tundra for KBM. Over the last five races, William Byron (148) has scored the most championship points with Bell (143) a close second. While Byron has scored three wins during that span, Bell only has one victory but has been the more consistent of the two. He has finished inside the top five in each of the last five races and has an average finish of 5.2 during that stretch compared to Byron’s average finish of 6.8.

Bell comes into Bristol riding high, but he’s still looking to cement his place in the inaugural Truck Series Chase. The best way to do that would be to park his No. 4 JBL/SiriusXM Tundra in victory lane on Wednesday night and guarantee his spot by being one of three drivers with at least two wins with only three races remaining until the playoffs begin.

Christopher Bell, driver of the No. 4 NCWTS JBL/SiriusXM Tundra:

You’ve won races in other series on high-banked pavement tracks, what is it about that type of track that fits your style?
“Yeah — I really seem to have taken a liking to racing at the high-banked tracks since coming over to the pavement side. They are a lot of fun because you can move around and find speed by running different lines. Although they are still pavement tracks, the races at those short, high-banked tracks seem to play out more like a dirt race because you have to be able to maneuver around heavy lapped traffic and dirt racers are used to that. There’s no place for the lappers to hide and no place for them to get out of the way. A majority of our races in the Truck Series are on mile-and-a-half tracks and they are so big that lapped trucks can get out of your way and they don’t really come into play. Besides our win at Gateway, probably our best race on pavement this year was at Dover and it seems like the drivers that are good at Dover are also successful at Bristol. It would be nice to get another win to officially lock us into the Chase and I feel like we will have a good shot at parking our JBL/SiriusXM Tundra in victory lane Wednesday night.”

Jerry Baxter, crew chief of the No. 4 JBL/NCWTS SiriusXM Tundra:

How did your team’s test at Bristol go earlier this season?
“The test went really well, but I’m a little bit concerned now that they’ve made some changes to the track since we were there in April. Even with the modifications to the track, I still think that we will be better off because we went and tested there. Any time you can get a young driver over 300 laps at a track before he makes his first start there it’s a good thing. We feel like this is a track that really fits Christopher’s style because you are able to move around and not just ride along the bottom. We’ve got a lot of momentum going right now and I feel like this team is getting stronger each week as we head towards the Chase.”

KBM-19: The No. 4 SiriusXM Racing team will unload KBM-19 for Wednesday night’s UNOH 200 at Bristol. The Tundra has seven top-five finishes in 12 career starts, including a win with Darrell Wallace Jr. at Homestead-Miami (Fla.) Speedway in the 2014 Truck Series finale. Bell has finished inside the top 10 in both of his starts with the chassis this season and also drove the same Toyota during a two-day test at Bristol in April.

The Book on Baxter:
Veteran crew chief Jerry Baxter is in his fourth season atop the pit box for KBM. Since joining KBM, Baxter’s drivers have posted eight wins, three poles, 1218 laps led, 29 top-five and 47 top-10 finishes across 78 starts. The California native spent the 2015 season calling the shots for KBM’s No. 51 team, which collected two wins, 10 top-five and 14 top-10 finishes with drivers Daniel Suarez (12 starts), Matt Tifft (six starts), Kyle Busch (three starts), and Christopher Bell (one start) behind the wheel. In addition to his eight wins at KBM, he boasts one other Truck Series win (Cale Gale, 2012) and one NASCAR XFINITY Series win (David Reutimann, 2007).

Baxter’s drivers have combined to record one pole (Cale Gale, 2012) one top-five and one top-10 finish resulting in an average finish of 22.0 across four Truck Series starts in the Volunteer State. His best result, a runner-up finish, came with Darrell Wallace Jr. in 2014.