Red, White and the Bluegrass State 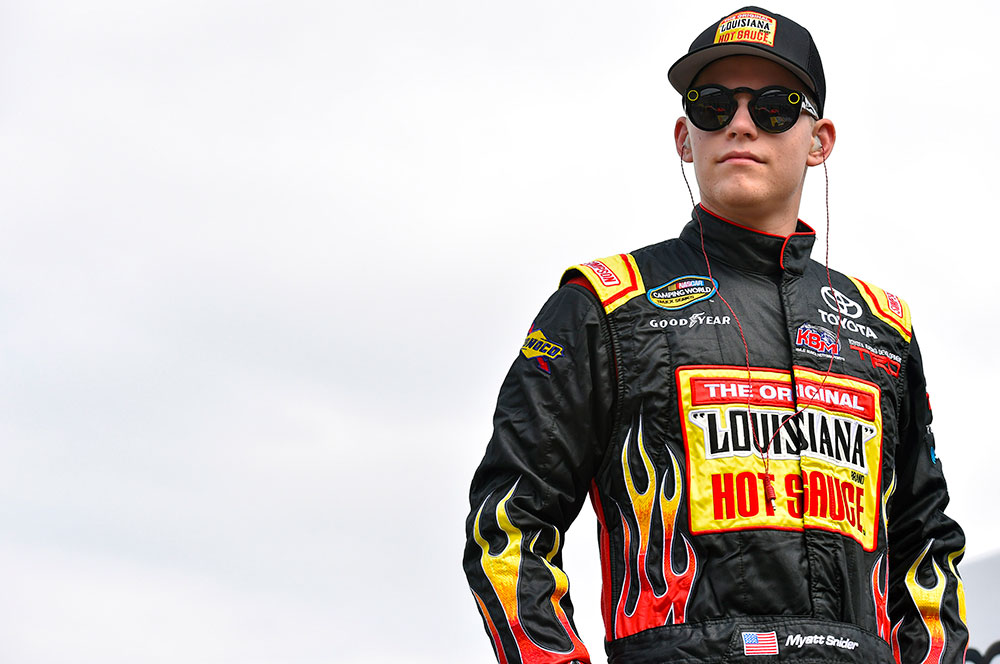 MOORESVILLE, N.C. (July 4, 2017) –  The state of Kentucky may be known for its horse racing, but on Thursday night a different kind of “horsepower” will be set to race in the Bluegrass State. This time, 22-year-old Myatt Snider will once again pilot the No. 51 Toyota Tundra for Kyle Busch Motorsports (KBM) in the NASCAR Camping World Truck Series (NCWTS) for his third start of the 2017 season.

The 1.5-mile tri-oval in Kentucky is the first track on Snider’s schedule where he has prior experience racing. Snider made his track debut in the ARCA Racing Series in September 2016. He started that race from the 10th position and posted a 25th-place finish. Although Snider has that experience, when he jumps in his No. 51 Tundra, there will be an additional layer of asphalt on the track that wasn’t there last fall when he raced. But, Snider and the No. 51 team will have three practices on Wednesday to get the Tundra dialed in for Thursday’s race.

Snider made his 2017 NCWTS debut at Daytona International Speedway in February, scoring a top-10 finish to start the season and was in place to grab a second top 10 at Texas until a late-race spin resulted in a 16th-place finish. After Kentucky, the rookie can be seen behind the wheel of the No. 51 Tundra in four more races in the 2017 season, including Chicagoland Speedway in Joliet, Ill., Sept. 15, Las Vegas (Nev.) Motor Speedway Sept. 30, Talladega (Ala.) Superspeedway Oct. 14 and Homestead-Miami (Fla.) Speedway Nov. 17.

When the drivers start their engines Thursday night under the lights, Snider will have a new sponsor on the hood of his No. 51 Tundra, Liberty Tax Service. Headquartered in Virginia Beach, Va., last year Liberty Tax Service prepared over two million individual income tax returns in more than 4,000 offices and online. Liberty Tax also supports local communities with fundraising endeavors and contributes as a national sponsor to many charitable causes.

With Liberty Tax Service on board, the patriotic-themed No. 51 Tundra will not be hard to spot on the race track, just look for the Tundra donning the American Flag. As America celebrates its birthday this week, Snider hopes to continue the celebration and take his red, white and blue No. 51 Liberty Tax Service Tundra to Victory Lane Thursday night.

What are you looking forward to the most going into the race at Kentucky Speedway?

“Kentucky has been a race that I’ve been looking forward to all year. It’s the first race that I’ll be running at a track where I have previous experience from ARCA, so to be back at Kentucky in a KBM Toyota Tundra is a blessing.  We also have our first race with our new sponsor Liberty Tax.  We are so excited to have that group on board with us.  We got to visit with them at their national convention a few weeks ago. It made me ready to get out there seeing how excited all the franchisees were to have their truck on the track.  The truck looks phenomenal, and I don’t think they could have designed a better scheme for a race on the week of the fourth of July. ”

How do you feel about the race Thursday night at Kentucky Speedway?

“I’m looking forward to racing at Kentucky Speedway Thursday night. We have three practice sessions on Wednesday to get our No. 51 Liberty Tax Service Tundra dialed in and ready to go. Everyone on the No. 51 team has worked hard to prepare a fast Tundra and hopefully we can find ourselves in Victory Lane Thursday.”

KBM-035: The No. 51 Liberty Tax Service team will race KBM-035 for Thursday’s Buckle Up in Your Truck 225. KBM teammate Todd Gilliland drove this Tundra earlier in the season at Gateway Motorsports Park. This is also the same Toyota that Daniel Suarez ran at Kentucky last season where he won the pole and let 59 laps.