Ready to Take on The Monster Mile 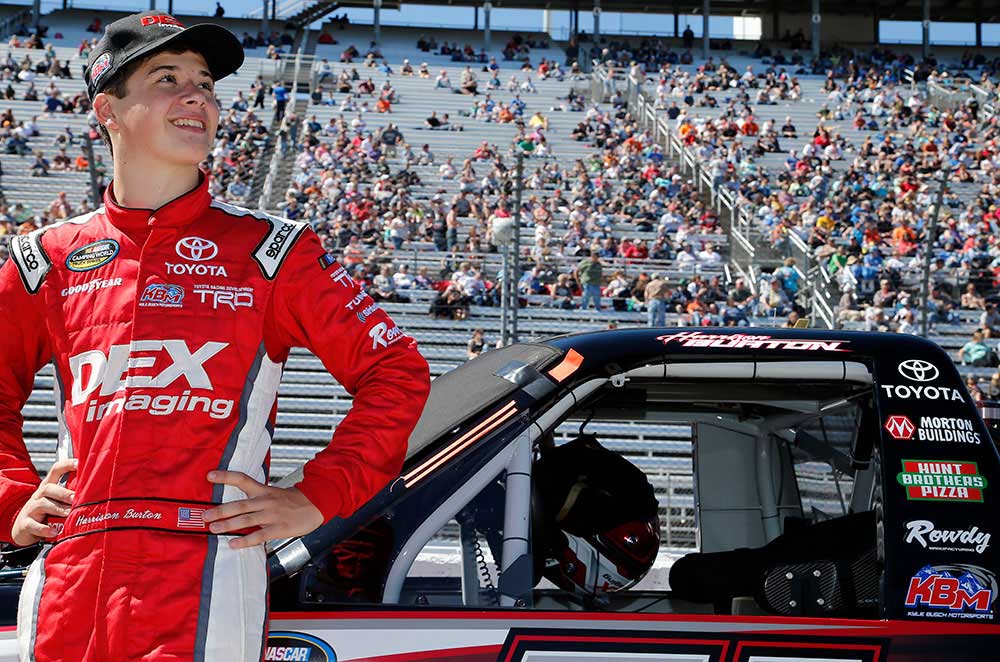 MOORESVILLE, N.C. (May 30, 2017) – Although Harrison Burton hasn’t been behind the wheel of the No. 51 Kyle Busch Motorsports (KBM) NASCAR Camping World Truck Series (NCWTS) Toyota Tundra in over two months, he has been busy racing and continuing his winning ways in 2017. Since the last time he raced for KBM, he has picked up two victories in the NASCAR K&N Pro Series East, where he currently sits atop the 2017 championship standings, as well as a win in the ARCA Racing Series.

On April 22 Burton raced his way to his first NASCAR K&N Pro Series East win at the coveted Bristol (Tenn.) Motor Speedway. The 16-year-old dominated the race, leading 68 laps before rain ended the race early on lap 70. Burton’s second win came two weeks later at South Boston (Va.) Speedway on May 6 after leading three laps on his way to the checkered flag.

The second-generation driver continued his hot start to the 2017 season picking up his first career win in the ARCA Racing Series at Toledo (Ohio) Speedway on May 21. In just his second career series start, Burton executed a bump-and-run pass of Dalton Sargeant to take the lead with eight laps remaining and then cruised to a 1.852-second victory. The victory was hi seventh overall this season, with four Super Late Model wins, two K&N Pro Series

Burton now returns to the NCWTS for his second of six starts with KBM this season. His season debut in the No. 51 DEX Imaging Tundra came at Martinsville (Va.) Speedway earlier this season. He started the race from the seventh position and after a late-race spin that put him near the rear of the field, he worked his way back to a solid 13th-place finish. After Dover, Burton will pilot the No. 51 Tundra at four more NCWTS events including Iowa Speedway in Newton June 23, Eldora Speedway in Rossburg, Ohio July 19, Bristol (Tenn.) Motor Speedway Aug. 16 and Martinsville (Va.) Speedway Oct. 28.

When Burton takes the green flag Friday at The Monster Mile, he will don the colors of his sponsor DEX Imaging. DEX Imaging, based out of Tampa, Fla., is the nation’s largest independent provider of office technology with a local touch. Burton is excited to have them back on board the No. 51 Toyota Tundra and he hopes to tame the “Monster Mile” of Dover International Speedway and take his team to Victory Lane Friday afternoon.

This is your second NCWTS race of the season, how do you feel going into Dover?

“I am really excited going into Dover. We have a really great truck. I have been in the shop a lot with the guys and they are confident about the weekend. I can’t wait to get in my DEX Imaging Tundra and see what we have when we unload. I know that if we are good or bad we are going to work hard in practice to get it better either way. I am just really excited to get going.”

You have experience at Dover, can you take that and apply it to this weekend?

Harrison Burton is back in the truck this weekend for the second time this season, what are your thoughts about Friday’s race?

“The whole No. 51 team is excited to have Harrison back in the truck this weekend at Dover (International Speedway). We had a solid run with him in his season debut at Martinsville and we plan to build on that. I know that Harrison learned a lot at Martinsville and hopefully he will take what he learned and apply it this weekend so that we can bring home another great finish for Kyle Busch Motorsports.”

KBM-033: The No. 51 DEX Imaging team will race KBM-033 for Friday’s Bar Harbor 200. This Tundra earned a second-place finish at Dover International Speedway in 2016 with Daniel Suarez.

Harrison Burton 2017:
The Manion Report:
Kevin “Bono” Manion guided KBM’s No. 51 team to one win, one pole, four top-five and seven-top 10 finishes with four different drivers behind the wheel last year in his first season as a Truck Series crew chief. Prior to joining KBM, the Massachusetts native collected five victories in 10 seasons atop the pit box in NASCAR’s premier series, including two marquee wins with Jamie McMurray in 2010; the Daytona 500 and the Brickyard 400. Before graduating into NASCAR’s top division, he guided Martin Truex Jr., to back-to-back NASCAR XFINITY Series titles in 2004 and 2005. In addition to his five Monster Energy Cup Series victories, Manion boasts 15 XFINITY Series wins; 13 with Truex Jr., and two with Dale Earnhardt Jr.
Manion’s lone Truck Series race at Dover resulted in a second-place finish with Daniel Suarez last season.  He earned two wins, three top-five and three top-10 finishes in four XFINITY Series starts with Martin Truex Jr. While calling the shots in the Monster Energy NASCAR Cup Series, Manion earned one win, one top-five and three top-10 finishes at Dover. His lone win came in 2007 with Truex.
Share this post
Share on FacebookShare on Facebook TweetShare on Twitter