Ready to Take a Bow at Michigan 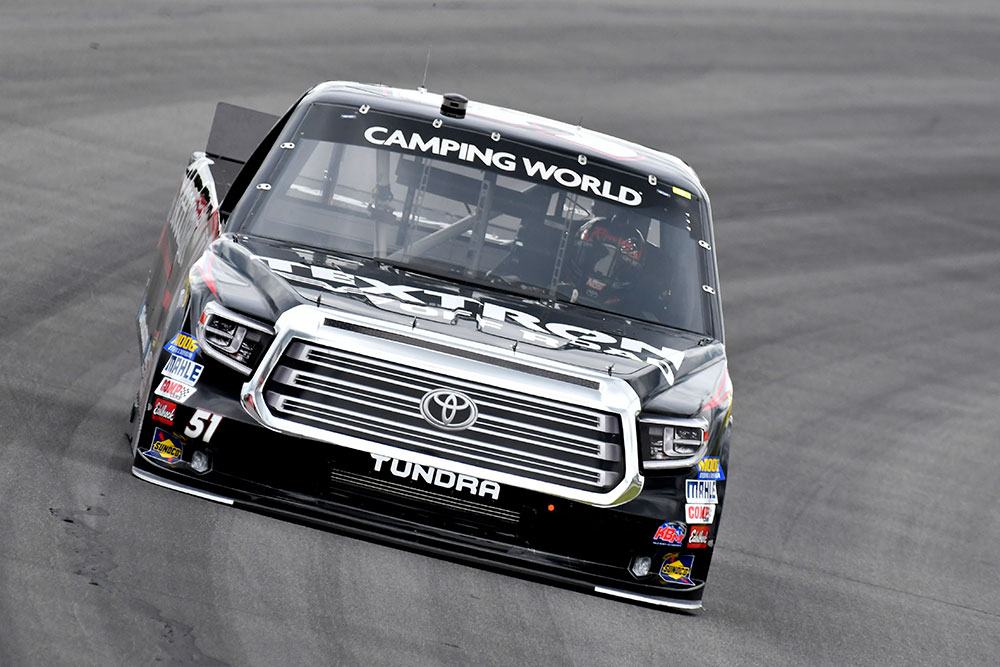 MOORESVILLE, N.C. (August 8, 2017) – Saturday afternoon, in the heart of the Irish Hills of Michigan, Kyle Busch will strap into his No. 51 Toyota Tundra for the final time this season. The LTi Printing 200 at Michigan International Speedway will mark Busch’s 10th NASCAR Camping World Truck Series (NCWTS) start at the two-mile track.

In his nine previous NCWTS starts at Michigan, Busch has one win and an impressive seven top-five and eight top-10 finishes. The 32-year-old found Victory Lane in 2015, which was the last time he piloted the No. 51 Toyota Tundra at the track. Busch took the green flag from the 10th position and led a race-high 44 laps en route to the victory.

This weekend in the state known for its Great Lakes, Busch will be pulling double-duty at the oval track. Saturday, he will race 100 laps in the No. 51 Textron Off Road Toyota Tundra for the NCWTS and Sunday he will compete in the Monster Energy NASCAR Cup Series (MENCS). Busch has one MENCS win at Michigan in 2011, where he started 17th and raced his way to the front of the pack, leading 22 laps before crossing the finish line first.

The owner-driver has two Truck Series wins this season in the No. 51 Toyota Tundra and hopes he can add a third win to the list after Saturday’s race. In his first win of 2017, Busch led 91 laps en route to the checkered flag at Kansas Speedway earlier this season. One week after that win, Busch found Victory Lane again at Charlotte Motor Speedway after leading a race-high 90 laps.

Although Michigan is Busch’s last race in the No. 51 Tundra this season, Rowdy fans will have a chance to see Busch back on track for KBM in the No. 46 Tundra on Aug. 16 at Bristol (Tenn.) Motor Speedway.

Busch is confident that after the 100-lap race Saturday afternoon, he will have a chance to take his signature bow in front of the fans with the winning checkered flag in hand once again in the Irish Hills of Michigan.

Kyle Busch, Driver of the No. 51 NCWTS Textron Off Road Tundra:

How are you feeling going into the race Saturday afternoon?

“This is my last race of the year with the 51 team, so we’re looking to go out on a high note. We’ve had really fast Tundras each time out, led a lot of laps and we’ve been able to pick up a couple of wins for our new partner Textron while representing their Cessna, Beechcraft, Hawker and Textron Off Road brands. I’m confident we’ll have another fast Tundra Saturday and with the draft coming into play in the truck races at Michigan, it’s going to take teamwork between all three of the KBM trucks to get to victory lane at the end of the day.”

Kevin “Bono” Manion, Crew Chief of the No. 51 NCWTS Textron Off Road Tundra:

What will it take to get the win Saturday at Michigan International Speedway?

“Saturday will be our last race this season with Kyle (Busch) behind the wheel and we want to take as much advantage of it as we can. Kyle has won at Michigan in all three series and he knows his way around the track. This is a track where working with our KBM teammates is important because of the draft. We’ve unloaded fast Tundras so far with Kyle behind the wheel and I’m confident we will do this same this weekend. The No. 51 team has been working very hard and I hope we can get that third win Saturday afternoon.”

The Manion Report:
Kevin “Bono” Manion guided KBM’s No. 51 team to one win, one pole, four top-five and seven-top 10 finishes with four different drivers behind the wheel last year in his first season as a Truck Series crew chief. Prior to joining KBM, the Massachusetts native collected five victories in 10 seasons atop the pit box in NASCAR’s premier series, including two marquee wins with Jamie McMurray in 2010; the Daytona 500 and the Brickyard 400. Before graduating into NASCAR’s top division, he guided Martin Truex Jr., to back-to-back NASCAR XFINITY Series titles in 2004 and 2005. In addition to his five Monster Energy Cup Series victories, Manion boasts 15 XFINITY Series wins; 13 with Truex Jr., and two with Dale Earnhardt Jr.
Manion’s lone Truck Series race at Michigan resulted in a 20th-place finish with Cody Coughlin last season. He earned two top-five and two top-10 finishes in two XFINITY Series starts with Martin Truex Jr. While calling the shots in the Monster Energy NASCAR Cup Series, Manion earned two top-five and two top-10 finishes in 19 starts at Michigan
Share this post
Share on FacebookShare on Facebook TweetShare on Twitter