Ready to Shine Bright Deep in the Heart of Texas 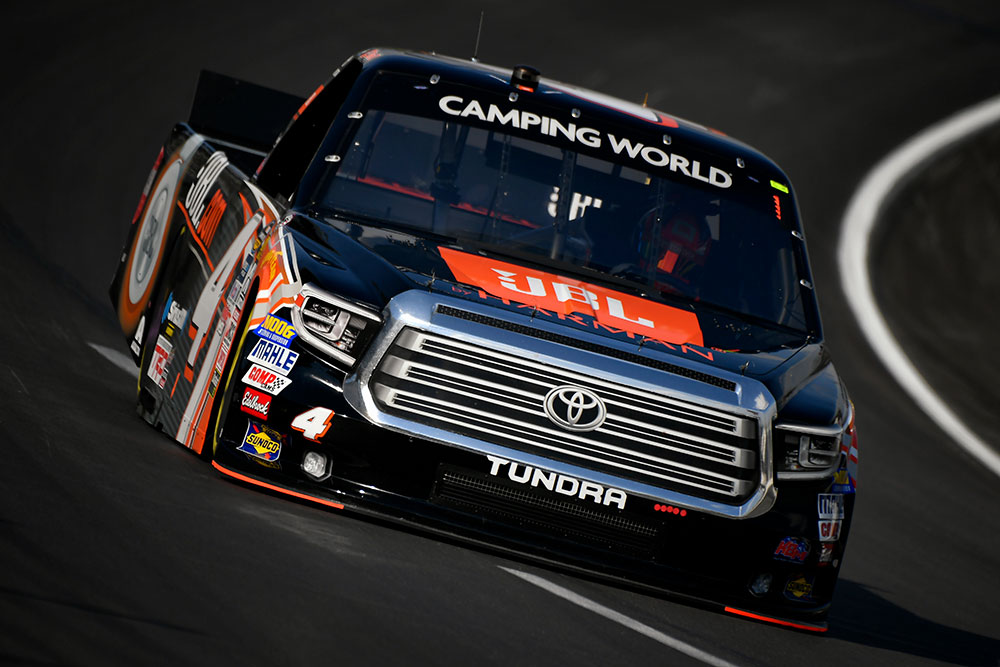 MOORESVILLE, N.C. (Nov. 1, 2017) – Oklahoma native Christopher Bell will make his 51st career NASCAR Camping World Truck Series start Friday night in the JAG Metals 350 at Texas Motor Speedway (TMS) in Fort Worth. Bell will be looking to add to his series-leading five wins in 2017 and complete a sweep of the Truck Series races at Texas this season.

In the June race at the 1.5-mile tri-oval, the 22-year-old came from the 21st starting position to lead 92 of the final 98 laps and was just inches ahead of Chase Briscoe when the field was frozen after a three-truck accident ended the race under caution during the green-white-checkered finish. If Bell is able to win Friday night’s race at the track located just over 150 miles from where he grew up in Norman, Okla., he would become just the third driver to sweep the Truck Series races at TMS. Ron Hornaday Jr. was able to win both races in 2008 and Johnny Sauter accomplished the feat in 2012.

With an eighth-place finish at Martinsville (Va.) Speedway last weekend in the opening race of the Round of 6, Bell maintained his spot atop the Truck Series championship standings for the ninth consecutive race. He currently leads reigning Truck Series champion Johnny Sauter by three points and with two events remaining in the Round of 6 has a 45-point cushion on the cutoff line for advancing to the championship race at Homestead-Miami (Fla.) Speedway.

Bell, who was an open-wheel standout before becoming a pavement prodigy, has displayed the talent necessary to have a successful career in NASCAR since coming on the scene in June of 2015. Near the end of the 2016 season he started producing more consistent results and in 2017 those results have become eye opening. His continued progress has allowed him to become dubbed as one of the sport’s rising stars. Across the first 25 starts of his Truck Series career the Toyota development driver registered two wins, 308 laps led, eight top five-finishes, 16 top-10 finishes and an average finish of 10.6. He has improved in all of those categories, producing five wins, 755 laps led, 14 top five-finishes, 22 top-10 finishes and an average finish of 6.2 across his last 25 Truck Series starts.

With his graduation to the NASCAR XFINITY Series already announced for 2018, Bell will be looking to cap off his second    full-time season in the Truck Series by adding another championship banner to the five already hanging in the rafters at Kyle Busch Motorsports. They say that the stars at night are big and bright deep in the heart of Texas and one of NASCAR’s rising stars is hoping to shine bright under the lights of Texas Motor Speedway Friday night. He’s hoping to put on a black cowboy hat and ride out of victory lane with a ticket to the championship race at Homestead-Miami (Fla.) Speedway.

How do you feel about where you stand with two races remaining in the Round of 6?

“We didn’t have our best race of the year at Martinsville, but we were able to salvage a solid finish and maintain the points lead. Since one of the playoff contenders didn’t win at Martinsville, that means that at least two of the spots in the championship round will transfer off of points, so we are in really good shape going into the final two races of the Round of 6. We want to run better than we did at Martinsville — we want to win. I have no doubt that we will be better at Texas, because the mile-and-a-half tracks have been out strong suit all season long.”

Does winning the June race at Texas give you confidence heading into Friday night’s race?

“Winning at Texas earlier in the year was huge for us and it gives us a good baseline setup to unload with this time around. The fall race is typically a little bit cooler than the summer race, so the track will be a little bit different and we will probably have to make some minor adjustments to our setup for that. With the repave I feel like the field will be extremely tight — you saw in the June race that people were able to draft and the leader wasn’t able to get away. I expect that pack will be a lot bigger this time around.”

After winning the June race at Texas will you unload with a similar setup?

“We will definitely unload with something pretty similar to what we raced with in June. This time around the track temperatures are going to be a little bit different and all three series are running Friday, so how the rubber gets laid down is going to be a little bit different and we’ve made some minor adjustments in anticipation of those factors. Goodyear is also bringing a new left-side tire, so we will have to adapt to that as well. We are prepared and ready to go out and put the JBL Tundra in victory lane.”

KBM-047: The No. 4 JBL Racing team will unload KBM-047 for Friday night’s JAG Metals 350 at Texas Motor Speedway in Fort Worth. It is the same Tundra that Bell led a race-high 64 laps and finished second with at Las Vegas (Nev.) Motor Speedway in the Round of 8.

KBM NCWTS @ Texas Motor Speedway:
The Fugle File:
Ryan “Rudy” Fugle begins his fourth season as a crew chief at KBM and sixth overall with the organization.  The New York native has guided his team to an Owner’s championship in all three of his seasons (2013, 2015 & 2016) atop the pit box at KBM, including a combined Owner’s/Driver’s Championship with Erik Jones in 2015. His drivers have combined for 21 wins, 13 poles and 46 top-five finishes across his 88 races calling the shots for the organization. Under his tutelage last season, William Byron collected a Truck Series’ rookie record seven wins while leading the No. 9 Tundra team to KBM’s fourth consecutive and fifth overall Owner’s championship.
Fugle’s NCWTS drivers have posted three wins, one pole, three top-five and five top-10 finishes resulting in an average finish of 11.0 across eight starts at Texas. Fugle has won with three different drivers at Texas; Erik Jones in November of 2015, William Byron in June of 2016 and Christopher Bell in this year’s June event.
Share this post
Share on FacebookShare on Facebook TweetShare on Twitter